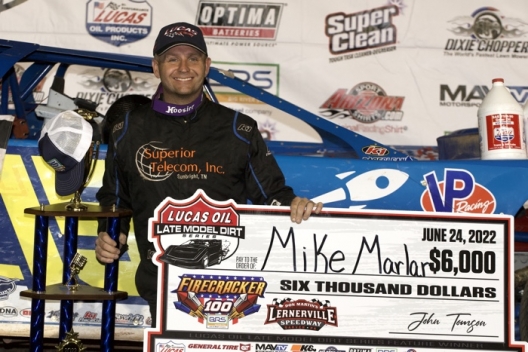 Ryan Neiderlander
Mike Marlar smiles after his second victory in as many nights at Lernerville.
What won the race: Putting himself on the precipice of sweeping the Firecracker 100 weekend, Mike Marlar of Winfield, Tenn., overtook Ricky Thornton Jr. for the lead on lap 14 and held off a late challenge from Tim McCreadie to capture Friday night’s 30-lap preliminary feature at Lernerville Speedway. The 44-year-old’s second $6,000 Lucas Oil Late Model Dirt Series triumph in as many evenings came by 0.581 of a second over the ninth-starting McCreadie.
Quotable: “(Thornton) had the bottom and he wasn’t gonna move and I was just kind of waiting on that brown ring in the bottom to wear out,” Marlar said. “It was getting thinner and thinner and thinner, so then on that (lap-12) restart I found some crumbs out here in the middle leaving four so I packed those down good and it worked out for me (to take the lead). It’s definitely been a good weekend so far. The trip’s paid for, but tomorrow’s the big cherry on top. We definitely got a good 30-lap car but it slides around on me when the tires get warm, so tomorrow we’re gonna get some harder tires and that’ll help the situation too.”
Key notes: One night after earning his first-ever victory at Lernerville, Marlar repeated to register his 17th career Lucas Oil Series checkered flag. ... Marlar earned the pole for Saturday's first Firecracker 100 heat as he bids for a $50,000 victory that would make him the second driver to sweep the Firecracker weekend, joining Josh Richards in 2013. ... McCreadie grabbed second from Thornton on lap 17 and nosed underneath Marlar several times in the final circuits but settled for runner-up money. ... Thornton placed third after leading laps 1-13. ... Floridian Mark Whitener briefly ran as high as third before crossing the finish line in fourth while outside polesitter Hudson O'Neal slipped to fifth. ... Caution flags flew for Ryan Montgomery stopped on lap 12; Daulton Wilson slowing on lap 16; and a lap-18 dual spin involving John Garvin Jr. and Kyle Strickler.
On the move: Jonathan Davenport of Blairsville, Ga., started 15th and finished seventh.
Winner's sponsors: Marlar’s Longhorn Chassis is sponsored by Delk Equipment Sales, Rockets Convenience Plus, Tri-Rivers Enterprise (Mark and Kim Dotson), Auto Parts 4 Less, Mesilla Valley Transportation, Capital Capsigns, VP Racing Fuels, Stanley Best Heating & Aiar, Midwest Sheet Metal and Bilstein.
Points chase: Before Lernerville: 1. Brandon Sheppard (3,100); 2. Tim McCreadie (3,035): 3. Tyler Erb (2,935); 4. Ricky Thornton Jr. (2,880); 5. Earl Pearson Jr. (2,765); 6. Hudson O’Neal (2,660); 7. Ashton Winger (2,570); 8. Garrett Alberson (2,465); 9. Jimmy Owens (2,400); 10. Devin Moran (2,320).
Current weather: Clear, 73°F
Car count: 54
Fast qualifier: Earl Pearson Jr.
Time: 15.659 seconds
Polesitter: Ricky Thornton Jr.
Heat race winners: Ricky Thornton Jr., Mike Marlar, Michael Norris, Hudson O'Neal, Mark Whitener, Ashton Winger
Consolation race winners: Jared Miley
Next series race: June 25, Lernerville Speedway (Sarver, PA) $50,000
Editor's note: Results and race details are unofficial.
From staff reports

Putting himself on the precipice of sweeping the Firecracker 100 weekend, Mike Marlar of Winfield, Tenn., overtook Ricky Thornton Jr. for the lead on lap 14 and held off a late challenge from Tim McCreadie to capture Friday night’s 30-lap preliminary feature at Lernerville Speedway. The 44-year-old’s second $6,000 Lucas Oil Late Model Dirt Series triumph in as many evenings came by 0.581 of a second over the ninth-starting McCreadie.

The Firecracker 100 weekend continues Friday with the second of two preliminary program leading into Saturday’s $50,000-to-win finale. … Thursday’s 54-car field was down one from last year’s turnout but marked the first back-to-back Firecracker rosters of 50-plus cars since 2013 (60) and ’14 (55). … The weather remains spectacular — sunny with highs in the mid-80s — for the perennially rain-plagued event. … Thursday winner Mike Marlar of Winfield, Tenn., drove to victory in the Ronnie Delk-owned Longhorn car he debuted one week ago at Tennessee’s Smoky Mountain Speedway. He is seeking his eighth career start in the Firecracker 100 finale in hopes of improving upon his top finish of second (2017 and ’18). … After escaping injury when he flipped wildly on lap eight of Thursday’s feature, Chub Frank of Bear Lake, Pa., is ready to race the XR1 Rocket No. 1 that Josh Richards has driven this year as a teammate to Frank’s cousin Boom Briggs. … Ross Robinson of Georgetown, Del., had insult added to injury in Thursday’s second heat when he pulled up lame in turn two due to an expired engine and was clipped in his left-rear corner moments later by Logan Zarin of Moon Township, Pa. Robinson failed to transfer with his backup car in his heat, but he’s repaired the damaged car and dropped in a replacement power plant for Friday’s program. … Robinson's wife and crew chief, Amanda Robinson, is making her fifth competitive start of 2022 in the Crate Late Model class. She was a group fast-timer Thursday and starts from the pole in a Friday heat as she pursues the RUSH event's $20,000 top prize. ... Lernerville regular Colton Flinner of Allison Park, Pa., was put behind Friday by a broken driveshaft that prevented him from logging a qualifying lap. He rallied to transfer through a B-main and finished 20th in the feature. … Michael Norris of Sarver, Pa., a two-time Lernerville Firecracker prelim winner, also had to fight back from a poor qualifying effort (he said he wasn’t set up right for a track surface that differed dramatically for this year’s weekly action) to crack the feature lineup in his heat. He finished 13th in the 30-lapper. … Lucas Oil rookie Daulton Wilson of Fayetteville, N.C., recorded his first career overall fast-time honor on the tour in Thursday’s qualifying session but had to win a B-main to make the feature. He advanced to finish 16th in his first-ever start at Lernerville. … John Garvin Jr. of Sarver, Pa., who is back in Dirt Late Model competition this season after running sprint cars since 2013, won his Thursday heat but spun from contention on lap seven of the feature. … Fairmont, W.Va., driver Ryan Montgomery’s Suppa Racing car sports the No. CJ1 in honor of his car owner Terry Suppa’s friendship with late chassis builder C.J. Rayburn. Thursday was the third start carrying the CJ1 for Montgomery, who is also running Suppa’s Lazer Chassis Crate Late Model this weekend to mark the first time in his career he’s pulled double-duty at a racetrack. … Gregg Satterlee of Indiana, Pa., who won May 13’s ULMS feature at Lernerville, failed to qualify for Thursday’s feature. He was saved from an opening-lap heat race slip over the berm in turns and two by a caution flag but struggled to find speed as he fell two spots short of transferring in a B-main. … Teenager Garrett Smith of Eatonton, Pa., who recently graduated from high school, made his first career start at Lernerville on Thursday after making a 10-hour overnight haul from Wednesday’s DIRTcar Summer Nationals show at Adams County Speedway in Quincy, Ill.