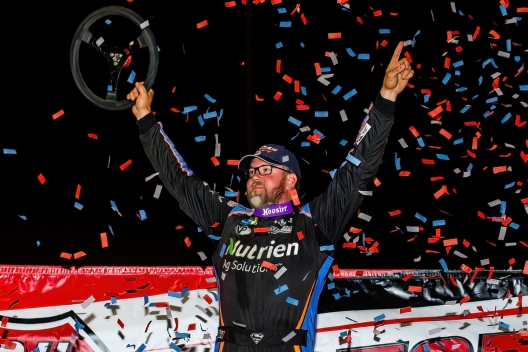 A misstep in traffic Friday against Devin Moran cost him a $15,000 Lucas Oil Late Model Dirt Series payday, but the 38-year-old driver got right back on track Saturday with a whopping $50,000 on the line in the E3 Spark Plugs Historic 100.

"We's almost batting 1000," Davenport said. "We let one get away from us last night, but you know, we made up for it tonight."

He made up for it in a big way, running mostly unchallenged in building comfortable leads at the 5/8-mile oval, eventually taking the checkers 2.142 seconds ahead of Brandon Overton of Evans, Ga., who ran second most of the way. Earl Pearson Jr. of Jacksonville, Fla., settled for third after a brief stint in the second spot while Gregg Satterlee of Indiana, Pa., and Dresden, Ohio's Moran rounded out the top five finishers.

Davenport notched his sixth overall victory of the season and avoided lapped-traffic problems that have cost him significant paydays, including when Moran slipped by Friday to regain the lead with seven laps remaining.

"It's huge, for sure. It's great for me and for my team, for my owners and my sponsors. It definitely will make the ride home a whole lot easier tonight," Davenport said. "We've had a great car the past, you know, two months. My guys have really worked hard and we've been trying stuff and they've hit on something just about everywhere we go, no matter if it's a a super speedway like here in West Virginia, or a little bullring (like) Wisconsin."

While he might be fast in multiple conditions, the enormous WVMS oval clearly fits Davenport well.

"Thanks to Cody for putting this event together," he said. "You know, he had a vision when he took his place back over, you know, a year and a half ago or whatever, and he's turned it around and put on a hell of a show tonight."

Overton, who rebounded from an 11th-place finish in his WVMS debut on Friday, had a solid run but couldn't keep up with Davenport.

"I asked him before the feature what tire to put on and we put a hard one on and I think he had the next step down," Overton said. "But congrats to him. It don't matter; he's been good all weekend. Congrats to him and his guys. Just proud of my team. We sucked yesterday, so to come back and run second, I'll take it."

Pearson had his third top-five finish in his last five starts.

"Well, it was big for me and the sponsors and the team, (car owner) Jason Papich back in California cheering us on. ... it was a good race for us," Pearson said. "We started seventh and come up through there on the bottom. I just didn't need no cautions, really. The restarts wasn't helping me at all. We just couldn't get going on them. But you know, Brandon Overton, and he's one of the best in the business. So we're happy to finish third there."

Four cautions slowed the action, including on the 23rd lap when series rookie Garrett Alberson of Las Cruces, N.M., got into the turn-four wall after a 23rd-to-13th charge. Other yellows appeared on the 19th lap for a slowing G.R. Smith and when Pete Crum drew a yellow on lap 24. The final yellow appeared on the 38th lap for Hudson O'Neal (broken kill switch) and Ashton Winger (broken driveshaft).

Notes: Davenport has 59 career Lucas Oil victories. His most recent came Oct. 10, 2021, at Rome (Ga.) Speedway. ... Garrett Alberson and Hudson O'Neal went to backup cars for the main event — O'Neal after a broken right-rear wheel caused him to blow a tire and back into the turn-one wall while leading his heat, and Alberson due to his involvement in a multi-car accident at the start of the B-main. ... After work on the track, a few extra laps were needed to iron out the surface between the four-wide parade lap and the beginning of the main event. ... R.J. Conley drove a car with a throwback graphics scheme paying tribute to his late father, Hall of Fame driver Delmas Conley. ... Saturday's race was presented by Jan Dils Attorneys at Law.