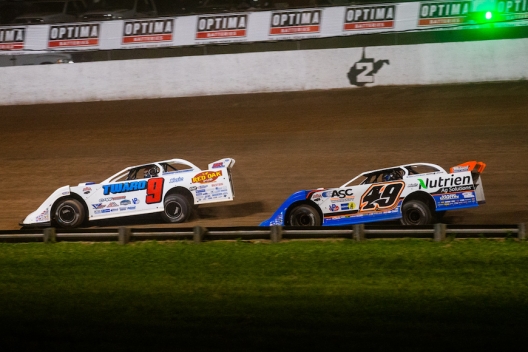 MINERAL WELLS, W.Va. — Remembering other recent losses while leading amid traffic, Jonathan Davenport of Blairsville, Ga., felt like he was trapped in the movie “Groundhog Day” on Friday at West Virginia Motor Speedway with polesitter and fellow front-row starter Devin Moran of Dresden, Ohio, regaining the lead on the 24th lap.

The victorious Moran said “I Got You Babe” to the $15,000 winner’s purse on the opening night of the Historic 100, the first Lucas Oil Late Model Dirt Series event at the 5/8-mile speedplant since 2013.

“He was just trying to make a move around them guys and just messed up and I was able to slide underneath of him,” Moran said after notching his fourth Lucas Oil Series victory of the season. “Pretty badass. We’ll take it man.”

Moran, Davenport and another few dozen drivers will take another crack at WVMS on Saturday with a $50,000 payday on the line in the Historic 100 finale at the Cody Watson-promoted monster oval.

Davenport ended up 0.513 of a second behind Moran at the checkers with Gregg Satterlee of Indiana, Pa., in third. Ricky Thornton Jr. of Chandler, Ariz., and Earl Pearson Jr. of Jacksonville, Fla., rounded out the top five in the caution-free 30-lapper.

Moran took command early from his pole position, but Davenport — a three-time winner to WVMS last season without a defeat — stalked the leader and went past on the ninth lap, leading comfortably at halfway.

But Davenport’s timing in overtaking slower cars allowed Moran to move back in, and Moran’s inside move in turns three and four with seven laps remaining put him back out front and carried him to victory in a Longhorn Chassis that carried a throwback scheme paying tribute to the father of his car owner, Tye Twarog.

“Obviously J.D. has got his stuff rolling. His car's really good and we got a lot of work to do to be able to beat him tomorrow,” Moran said, who talked with his brother and crew member before the race about the importance of handling lapped traffic.

“The biggest thing was just to not get too close to them lapped cars when they're bunched up,” the winner added. “I didn't want to do what (Davenport) did, you know. I'd just try to maintain and then when someone would slip up, I'd hurry up and get up there and try to get under ‘em down the straightaway. The track was a little tricky tonight but it was really, really smooth and I’m sure they're gonna have it awesome for tomorrow.”

Davenport was just seven days removed from losing the lead in lapped traffic with 12 laps remaining in the $50,000-to-win Show-Me 100 at Lucas Oil Speedway in Wheatland, Mo., where Chris Ferguson won the Lucas Oil event. Davenport also lost another potential $50,000 payday on May 14 at The Dirt Track at Charlotte in XR Super Series competition with Chris Madden slipping by in the final five circuits.

“It’s starting to be like Groundhog Day,” Davenport said. “Every time we make the right move to get the lead, then I lose it in lapped traffic. I don't know. I was trying to really separate myself in lapped traffic. I was making some moves I really didn't want to make there, kind of diving in turn three there. But it just was really hard to get the outside of the lapped car. These cars knock such a huge hole through the air that I'd get loose any time I'd get to the outside.

“But that one time, lapped cars was lapping lapped cars, and I thought they was all wrecking getting into the corner. I guess I was watching too far in front of me and I just went to the outside a little too much there. But congratulations to Devin. And you know, thanks to my guys. They gave me another helluva hot rod again tonight that probably should have won the race. This is kind of, I don't know, getting to be quite a habit here. But maybe we can break it before tomorrow.”