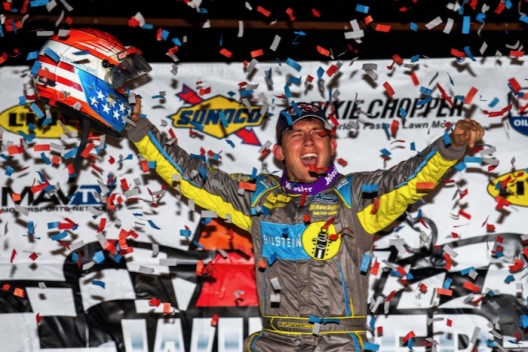 OCALA, Fla. — Devin Moran knew what he had to do on Tuesday night to erase memories of a bitter defeat 24 hours earlier at Bubba Raceway Park.

“The biggest thing is make sure we didn’t make any mistakes,” Moran said.

Dejected after a final-corner slip cost him what could have been a dramatic last-lap win over Tim McCreadie in Monday’s 40-lapper, Moran was on point all night. He was the overall fastest qualifier, won his heat race and led the feature’s entire distance off the outside pole in his Tye Twarog-owned Longhorn Chassis.

Moran glided away from Tyler Erb of New Waverly, Texas, over the final nine-lap run to the checkered flag, beating the Lucas Oil Series regular by 2.955 seconds for the $10,000 top prize. It continued Moran’s red-hot burst out of the 2022 starting gate as he recorded his second triumph and fifth top-two finish in the national tour’s five events.

Ricky Thornton Jr. of Chandler, Ariz., advanced from the 16th starting spot to finish third. Brandon Sheppard of New Berlin, Ill., started and finished fourth — though he slipped to seventh early in the race and didn’t reach his ultimate finishing position until lap 34 — and polesitter Shane Clanton of Zebulon, Ga., completed the top five.

Moran used some prerace advice from his Hall of Fame father, Donnie, to get his head on straight after his Monday disappointment.

“I talked to my dad today and I was pretty down all day obviously, and he just said, ‘Hey, we’re all human. We all make mistakes. Just don’t make enough that it’ll cost you a race or it affects the outcome.’”

Moran never wavered from the D-shaped bullring’s prime groove as he kept his pursuers at arm’s length throughout the A-main. Erb drew within a few car lengths in lapped traffic shortly after grabbing second from Clanton on lap 15, but, with four of the race’s five caution flags flying between laps 23 and 31, Moran didn’t have to deal with any other slower cars and maintained firm command.

“I was just really watching the lap counter,” Moran said of the race’s late stages. “It was so hard to get by the lapped cars. I knew with 10 to go I could pace myself enough to where we’d want to catch ‘em, and then when we had that last caution with eight to go or whatever (actually lap 31) I knew I was good and could hammer down.

“I was just kind of watching Wylie (his younger brother and crew chief), and that’s why at the end of the race I’d kind of gap a little more so I could catch those lapped cars without a problem.”

The victory was the fourth of Moran’s career on the Lucas Oil Series. Half of them have now come in the first five races of the 2022 campaign after Moran also captured Jan. 27’s season opener at Golden Isles Speedway near Brunswick, Ga. His two wins sandwich three consecutive runner-up finishes — two at Golden Isles and one at Ocala.

“I’m just really thankful for everyone who’s working so freakin’ hard,” Moran said. “It’s so fun to run this good and just finally execute and make it all happen.”

Erb, 25, registered a season-best Lucas Oil Series finish as he hustled his Best Performance Motorsports XR1 Rocket car from the eighth starting spot to second in 15 laps. When asked what he needed to battle with Moran, he was quite frank.

“Another lane and a horseshoe, because he’s been really good,” Erb said. “We’re just happy to run second.

“We had a rough heat race there … had to lay the business to the No. 11 (Austin Kirkpatrick) and a couple other ones. Just excited to get out of here and closer to East Bay (Raceway Park and the Feb. 7-12 Winternationals). Every day we get closer to that, the happier I get.”

The 31-year-old Thornton was the race’s biggest mover, earning hard-charger status with his 13-position improvement in the SSI Motorsports Longhorn car. He reached fourth place on lap 13 but didn’t climb to third until a lap-30 restart when he overtook Clanton.

“I think a lot of it was I was really good around the bottom early and the guys would kind of too tight and would slide up,” Thornton said of his advance to the podium. “I got up to fifth and was kind of content with that, and then I got a couple lucky restarts there and was able to get a couple more.”

Ashton Winger triggered the first on lap six when he experienced problems in turn four. Kyle Bronson ended an extended stretch of action with a flat right-rear tire on lap 23 before Josh Richards spun on the inside of the homestretch on lap 30. Back-to-back cautions on lap 31 flew for Garrett Smith (body and suspension damage) and Monday-night winner Tim McCreadie (right-rear flat while running seventh).

Notes: Moran’s two previous Lucas Oil Series victories came in 2013 at his family’s Muskingum County Speedway in Zanesville, Ohio, and 2020 at East Bay. His four career checkered flags on the national tour put him one triumph ahead of his father Donnie on the circuit’s all-time win list. … Moran has four career Georgia-Speedweeks victories. … Stormy Scott used a Lucas Oil Series provisional to start the feature in his twin brother Johnny’s car. He completed two laps and retired. … Kyle Bronson was scheduled to start the feature fifth after winning the third heat, but mechanical trouble forced him to pull out a backup car and take the green flag from the rear of the field. … Mark Whitener appeared to rebound well after losing his qualifying time because his Big Frog Motorsports car failed the “droop” rule deck height check, advancing from the rear of the fourth heat to finish second. But his car didn’t pass the post-heat droop check, disqualifying him from his transfer spot. ... The Lucas Oil Series has an off-day Wednesday before running a tripleheader Feb. 3-5 at All-Tech Raceway in Ellisville, Fla.

With a heavy racetrack and beaming sunshine — yes sunshine — slipping over the frontstrech bleachers — series and track officials decided to push the start of Tuesday’s program back 30-45 minutes. Track prep was still underway at 6:45 p.m. … It’s the second Lucas Oil Series race this week at Bubba Raceway Park and though the track didn’t widen out quite as hoped in Monday, it still provided excellent racing. … At 6 p.m. a hoard of drivers still stood at the track entrance entering turn one and watched as track workers farmed the surface. Some said it was wetter than Monday, others said it was about the same. Either way it earned the approval of Tyler Erb. “I love it. This is better than rubber all day and twice on Sunday,” said the New Waverly, Texas, driver. … Hometown driver Austin Kirkpatrick had to change a fuel pump Tuesday after dropping out of his heat race while running in a transfer spot on Monday. … Max Blair of Centerville, Pa., who carries the same number — 111 — and whose car has a black and green color scheme very similar to Erb’s sponsor and friend Steven Roberts, is parked beside Erb in the Ocalla pit area. Had Erb been tempted to lend Blair a hand because of the similarities? “That’s Steven Roberts. He’s here,” joked Erb. “We got the honey bee and the snake. What next? (Pennsylvania's) Matt Lux will be at East Bay, we’ll save a spot for him.” … Ross Robinson of Georgetown, Del., who charged from 22nd to ninth, in Monday’s feature, said he had help from the string of cautions that slowed the race midway through the 40-lapper. “You can really make up a lot of time on restarts, then it seems like you have to get back in line after that,” said Robinson. … Monday’s polesitter Brandon Sheppard of New Berlin, Ill., was on the wrong side of the restart exchange, especially when he was running second and decide to chose the outside line. “I just made a mistake. The top, where you had to roll up to to take off, got real slick real quick. (Race winner Tim McCreadie) beat on the start from the top, so I took the top. But it seemed like the guy on the bottom could pinch down and catch that brown with his left rear,” said Sheppard, who held on to finish third after losing a handful of spots. … Martinsville, Ind.’s Hudson O’Neal, suffered a flat in Monday’s feature after making contact with another car, but rebounded to finish 11th. While watching track prep Tuesday, O’Neal surmised that it didn’t matter how the track turned out. “We all got the same thing to race on, so we’ll make the best of,” said O’Neal. … Josh Richards, a three-time Speedweeks winner at Bubba Raceway Park (2012-’13, 2015), hopes for a better Tuesday after finishing 20th on Monday. “I just got over the cushion and thought I had a flat. I went back out, but they were eight wide in front of me, so I just came in because I didn’t want to get tore up,” said Richards. … The last five Speedweeks events at Ocalla have produced a different winner: McCreadie, Shane Clanton, Ricky Thornton Jr., Sheppard and Jonathan Davenport. … The Lucas Oil Series record car count, 49, was set on Feb. 1, 2021, the opening night of a two-race stint. The most ever, 51, was accomplished twice in 2012 on back-to-back nights of World of Outlaws action. ... Drake Troutman of Hyndman, Pa., has struggled with driveshaft issues and scratched from the first heat. … Max Blair, Colton Flinner Deshawn Gingerich and Matt Cosner all loaded up before time trials. … Mark Whitener of Middleburg, Fla., qualified 15th in Group A, but his time was disallowed because his car failed the deck height rule (droop). Whitener started eighth in the fourth heat and finished second in the caution-filled heat, but failed the droop rule again and had to run a consolation race. ... Kyle Bronson, winner of the third heat, went to a backup car following his heat victory, forfeiting his fifth-plce starting spot in the feature. He'll start from the rear of the field.