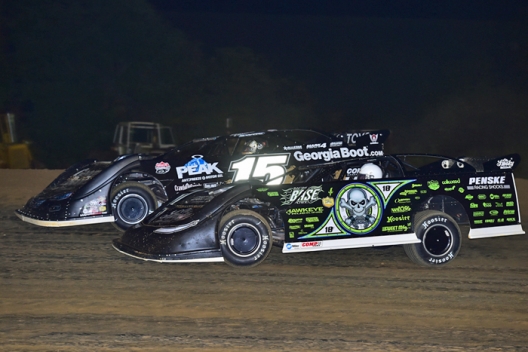 Rick Schwalle/rickschwalliephotos.com
Scott Bloomquist (0) battles for the lead with Steve Francis (15).
What won the race: Scott Bloomquist of Mooresburg, Tenn., launched forward from the fourth starting spot to take the lead from Steve Francis of Ashland, Ky., on lap 11 and then dominated the 35th annual Jackson 100. He survived six caution flags — all during the race's final 57 laps — to cross the finish line 3.222 seconds ahead of Martinsville, Ind.'s Don O'Neal.
Quotable: "We have had a great run here lately winning the World 100 and now the Jackson 100," Bloomquist said. "It’s on to another of my favorite places to run at in Knoxville, Iowa (for the Sept. 25-27 Knoxville Nationals). I was born in Iowa and that race has been a special race from day one — and everybody will know that we were there."
On the move: Chris Simpson of Oxford, Iowa, advanced from the 15th starting spot to place third; Dale McDowell of Chickamauga, Ga., moved from 17th to fourth; and Jonathan Davenport of Blairsville, Ga., hustled from 23rd to eighth.
Winner's sponsors: Bloomquist's Sweet-Bloomquist chassis has an Andy Durham Racing Engine and sponsored by Allstar Performance, Base Race Fuels, Hawkeye Trucking, Hoosier Racing Tire, Lucas Oil Products, Ole Smoky Moonshine, Penske Shocks, Sweet Manufacturing and Weld Racing Wheels.
Points chase: O'Neal vaulted into the Lucas Oil Series points lead by 35 points over Jimmy Owens of Newport, Tenn., who finished 12th after pitting late in the feature.
Car count: 47
Fast qualifier: Mike Marlar
Time: 13.263 seconds
Polesitter: Brad Neat
Heat race winners: Brad Neat, Steve Casebolt, Steve Francis, Scott Bloomquist
Consolation race winners: Dale McDowell, Jason Hughes
Provisional starters: Jonathan Davenport, Michael Chilton, Jeremy Hines
By Alli Collis
DirtonDirt.com staff writer

BROWNSTOWN, Ind. (Sept. 20) — With next weekend’s Knoxville Nationals on the horizon, Scott Bloomquist of Mooresburg, Tenn., is exactly where he wants to be — in victory lane.

Picking up a win in Saturday’s fourth heat race, Bloomquist advanced from the fourth starting spot, overtaking outside polesitter Steve Francis of Ashland, Ky., on lap 11 following an early battle for the lead. Bloomquist dominated the remainder of the 100-lap distance and was never again seriously challenged for the lead.

“This race is as tough as winning the World 100, even though it might not have appeared that way to others,” Bloomquist said after Saturday’s 100-lapper. “I’m proud to be the only five-time winner of this event."

Bloomquist notched back-to-back Jackson 100 victories in 1990 and 1991, and then again 2010 and 2011. After fighting mechanical issues in last month’s Lucas Oil Series events at Portsmouth Raceway Park and I-77 Raceway Park, Bloomquist said he’s happy with the direction his season is finally headed.

“This ranks right up there in the top,” Bloomquist said of his Jackson 100 victory. “The kind of year we’ve had …  too many seconds. Too many real fast runs and not got to capitalize on them. There’s a lot of good racecar drivers from this area that run really good here, especially Don O’Neal. It’s just a testament to where our car’s at right now. I think I’m in the zone again.”

Sixth-starting O’Neal improved four spots for a runner-up finish, while Chris Simpson of Oxford, Iowa, charged from the 14th starting position to finish third. Fifth-starting Mike Marlar of Winfield, Tenn., advanced one spot to finish fourth, with Dale McDowell of Chickamauga, Ga., rallying from the 17th starting position to round out the top five.

“I got a decent starting spot there and got up through there to third pretty quick,” O’Neal said Saturday after the race. “I got into second and thought we had a shot there for a while and then the longer we run, I realized I had a second or third place car. We wound up hanging on for second … a good points night.”

“We’ve got four more races,” O’Neal, who now holds a 35-point lead over Owens, said. “This right here is what we’ve got to do for these next four races … try not to get out of that top three. If we can do that, I think we’ve got a shot to win it.”

Third-place finisher Chris Simpson debuted a brand new Club 29 Race Car for this weekend’s Jackson 100. After difficulties in Friday’s time trials, he said he was pleased with his podium finish, especially at a racetrack he’s only raced at a few times. But he’s looking forward to next weekend’s Knoxville Nationals at Knoxville (Iowa) Raceway.

“We charged up through there pretty good,” Simpson said. “The car was good. At the end of the race, I felt like I was getting better again. It is what it is.

“I guess when you come with a new car, it’s kind of an open notebook anyway. It’ll be good to get home and celebrate a little and get ready for the big one.”

The race was slowed by six cautions. A lap-43 yellow flew for Jared Landers of when he drove off the embankment in turns one and two. Steve Francis drew a lap-49 caution when he slowed with a right-rear flat tire. A third yellow flew on lap 52 for Earl Pearson Jr. Jason Hughes slowed on the backstretch for a caution on lap 61. Another yellow flew for Dustin Linville on lap 77. Landers drew the final caution on lap 79 when his No. 777 went over the berm.