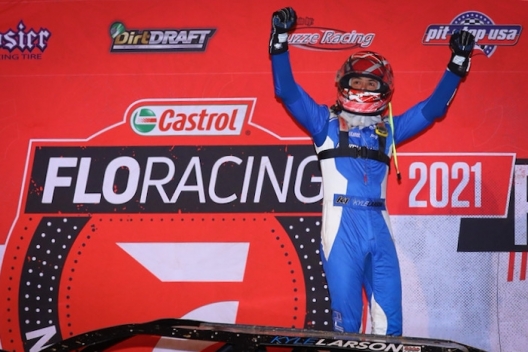 BROWNSTOWN, Ind. — Most leaders aren't excited about getting a side-by-side challenge. But during Kyle Larson's Wednesday debut at Brownstown Speedway, Tanner English's threat helped Larson find a way to win.

The 28-year-old NASCAR and open-wheel star from Elk Grove, Calif., regained the lead from English on the 25th lap at the quarter-mile oval and edged away for a $10,000 victory in the third round of the fledgling Castrol FloRacing Night in America tour.

The inside-running English slipped ahead after a lap-23 restart to grab the lead after a few bobbles by Larson, but Larson said being forced to run outside helped him find "the middle (groove) and just kind of carried momentum through the center," Larson said. "Had I not screwed up and had to battle him side-by-side, I've have probably kept ripping the top or something, and made a mistake, or let him just get by because I didn't have good grip off of (turn) four."

The eighth-starting English couldn't keep up the rest of the 40-lapper in finishing 1.736 seconds behind while Jonathan Davenport of Blairsville, Ga., who started alongside English on the fourth row, finished third. Brandon Sheppard of New Berlin, Ill., was fourth in his first race of the season  in his family-owned No. B5 while front-row starter Mike Marlar of Winfield, Tenn., was fifth in debuting a new Capital Race Car.

Larson was thrilled to continue his progress in Late Models in the K&L Rumley Enterprises No. 6 as he added his third victory in just a handful of career starts going back to last season.

"I'm very thankful that I somehow got linked together with Kevin Rumley," Larson said. "I really don't even know how it happened. Just very thankful. So thanks to Kevin."

The victory came with some emotions for Rumley, whose late father Lee Roy operated the team for more than 50 years and famously built some of the sport's most powerful engines. Larson's car was powered by a former Rumley engine freshened by Cornett Racing Engines of Somerset, Ky.

"This means so much for the Rumley family to take one of his old engines that (former driver Jonathan) Davenport won a lot of money with," Rumley said. "Jack (Cornett) updated it and we needed a spare and it really got us out of a bind, so from the grave, he's definitely looking out for us."

Larson got the jump at the outset and primarily used the high side through the early stages with Marlar holding the second spot for the first 18 laps. Sheppard briefly took second from Marlar on laps 19-20, but the charging English went underneath both of them and found himself in second when a lap-23 yellow flew just after Larson dropped to the low groove himself.

"When I seen (English) got to second, I knew where he was running," Larson said. "The little bit of video I've seen of (Brownstown), and watching throughout the night, he was really good around the bottom. I was really hoping I could get a good restart, not mess up in (turns) one and two and just kind of run around."

Instead, Larson got a poor start, struggling to maneuver turns two and four while English went underneath to lead lap 24. But giving up the inside groove, Larson stayed higher on the track, occasionally flirting with the extreme high-side berms at the wall-less racetrack while finding a faster way around.

"That was fun. I don't know if he was still there with me the whole time, but I was just trying to be smooth and keep the tires underneath me," Larson said. "But it was just a really good car. We got to test last night at Friendship and felt better than I'd felt there the other couple of tests we've ran. I knew we'd be good. I just needed to qualify good and start in front of (Davenport) and figured we'd maybe have a good shot at winning."

Despite briefly slipping ahead, English didn't have an answer for Larson.

"He was quick. I kind of wish he'd stay in NASCAR and beat up on them guys. But he's a good driver, no doubt, he's the real deal," English said. "That's a great car, you know. Rumley builds a great car, but he's a driver for sure and adapts well and it pretty amazing to watch.

"This is cool to run second. I'm happy with it. I can't thank Riggs Motorsports enough for everything they do for me. Brock and my dad, they work their tails off. It's a pleasure to drive this thing right now. It's really good and consistent and I'm happy with everything."

Davenport was fortunate to improve four positions from his starting spot, he said.

"I probably had a fifth-place car. We just got lucky and had a caution there toward the end. We went a little softer on tire — we gambled a little bit," he said. "We've been trying some new stuff with the car, and I just had my left-front way too far up in the air, and I couldn't really rotate getting in (the corners)."

Two cautions slowed the action, the first on lap-nine when Josh Rice spin as he battled Ricky Thornton Jr. in the top five. The second yellow appeared on lap 23 when Shelby Miles slipped over the turn-four banking.

Notes: Ricky Thornton Jr. of Chandler, Ariz., started fourth and ran in the top five the first 15 laps but finally slipped back and retired on lap 31. ... Front-row starter Mike Marlar's start in a Capita Race car for Ronnie Delk Motorsports marked the first start in that chassis since 2016. ... In prelims, Boom Briggs had a flat tire while running second in the third heat. He recovered to transfer through a consolation race and finished 13th. .... Ryan King had front end damage in the third heat but got the final feature starting spot and finished 15th. ... Keegan Cox made the feature while utilizing a crate engine; he retired after 23 laps in 17th. ... Britan Godsey went wildly over the turn-one banking after a tangle with Larry Greer in the second consolation; both were eliminated. ... Nick Hoffman won the modified feature. ... The event was presented by Slicker Graphics.