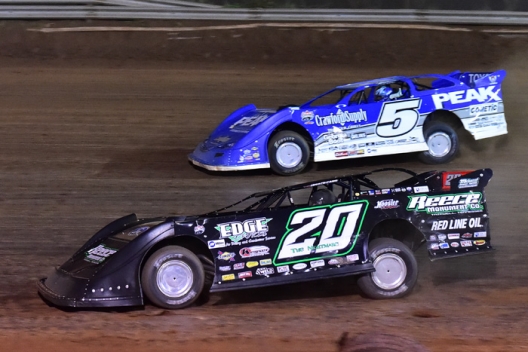 After grabbing a heat-race victory, O’Neal started outside the front row in the 100-lapper, taking the lead from polesitter Mason Zeigler of Chalk Hill, Pa., on the ninth lap. Clint Bowyer Racing teammate Steve Francis of Ashland, Ky., charged from the sixth starting spot to the front of the field on lap 15, but O’Neal regained the point a few laps later, leading the remainder of the 100-lapper for his seventh Lucas Oil Series victory of the season.

“To win the heat race and get started up front, that meant a lot here, because it was tough to pass,” O’Neal said. “It was hard out there in the middle of the racetrack to get around somebody. To get this Peak Motor Oil, Crawford Supply, Georgia Boot car in victory lane is pretty awesome. My first Hillbilly. … It’s awesome.”

After falling back early, seventh-starting Owens advanced to take home runner-up honors, while Francis rallied from the tail of the field to finish third after drawing a lap-42 caution when he spun in turns one and two. Dennis Erb Jr. of Carpenter, Ill., finished fourth, with Jonathan Davenport of Blairsville, Ga., rounding out the top five.

While O’Neal went unchallenged for much of the race, a close battle for the remaining top five spots waged on throughout the caution-plagued event. Scott Bloomquist of Mooresburg, Tenn., and Mike Marlar of Winfield, Tenn., each made it up to the second-place spot, but neither finished the race.

Bloomquist fell off the pace on lap 75, retiring to the pits, and returning to the tail of the field several laps later. A red flag waved for Marlar, two-time Hillbilly 100 winner, on lap 82 when his No. 157 machine made contact with the turn-three guardrail, barrel-rolling and landing upside down. He was uninjured.

Late-race cautions set up a showdown between O’Neal and Owens, now separated by 25 points in the Lucas Oil championship standings. Owens slipped by O’Neal with seven laps remaining, but wasn’t able to hold on to the lead. He finished just a half a second behind the race leader at the checkers.

“I guess we were runner-up tonight,” Owens said. “We had a good car. On the restarts there we kept getting shuffled back. I couldn’t go very good on the bottom. I had the momentum around the corners and every time they’d have a restart I’d get stuck on the bottom and kept falling farther and farther back. We just took care of our tires and everything and started working our way back up toward the front there.

“Those cautions kept killing me. I was confident I was going to get him, but they kept having caution, after caution and then we’d have to play catch up every time. And then there toward the end there were a couple times I thought I could have slid up in front of him, but we got to finish and you don’t want to get into all of that. Sometimes second is better than taking chances.”

Sixth-starting Francis led a few early laps and was running fourth when he spun for a caution on the 42nd lap. He worked his way back through the field, returning to the top five late in the race.

The race was slowed by a total of 13 cautions along with the red flag cleanup for Marlar’s accident.

The Lucas Oil Series returns to action Sept. 19-20 for Brownstown Speedway’s Jackson 100 with O’Neal running at his home track.

“It’s up and down,” O’Neal said of the Lucas Oil points chase. “It’s just tough. But our next race is at home for me … it’ll be Brownstown, the points race. I’m looking forward to that and hopefully we can come out of there and maybe have the points lead.”