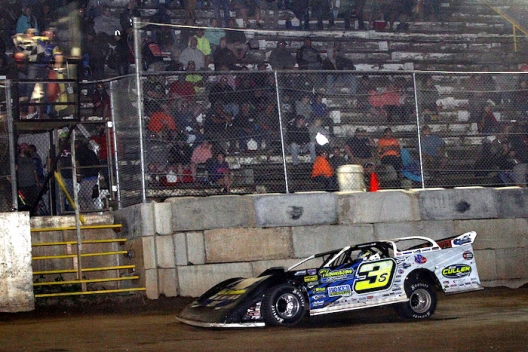 QUINCY, Mich. (Aug. 19) — After disappointing results in two straight DIRTcar Summer Nationals events, series points leader Brian Shirley needed something to get his groove back. A trip to Michigan and a race at a track he’d never seen before gave the three-time series champion just the turnaround he needed.

Shirley of Chatham, Ill., led every lap of Wednesday’s Summer Nationals feature at Butler Speedway, earning a $5,000 victory in the tour’s first ever visit to the 3/8-mile track in southern Michigan. Shirley’s seventh series victory of the season helped ease the frustration from his wreck on the opening lap of Lincoln Speedway’s Summer Nationals event on Sunday and a disappointing sixth-place finish in the tour’s visit to Kankakee County Speedway on Tuesday.

“That deal at Lincoln really took the wind out of my sails,” said Shirley, whose victory came on the first night of the tour’s four-race Michigan swing that wraps up its 2020 campaign. “When you have two bad nights in a row, you start thinking am I doing something wrong or did I mess something up. So just to put everything together, put a night together and have the car be as good as it was, it eases the mind going into the rest of the week.”

Shirley was never seriously challenged in winning Wednesday’s 30-lap race from the pole. He pulled away from the field through two restarts and deftly handled slower traffic on his way to earning the 33rd Summer Nationals victory of his career.

With traffic slowing his pace slightly in the closing laps, Shirley crossed the finish line 1.467 seconds ahead of Drake Troutman of Hyndman, Pa. Rusty Schlenk of McClue, Ohio, finished third with polesitter Garrett Wiles of Hubbardston, Mich., and Jason Feger of Bloomington, Ill., rounding out the top five.

Shirley’s bounce-back performance came in the XR1 Rocket that he ran in every Summer Nationals event this season until Tuesday’s race at Kankakee. That car, which propelled Shirley to a commanding lead in the chase for his fourth series championship, was damaged in the wreck at Lincoln on Sunday, leading Shirley to give his backup car a try at Kankakee. With the backup car not performing as well as Shirley would’ve liked, he was happy to be back in his primary car at Butler.

“There’s something about this car that just works,” Shirley said. “Maybe it ain’t nothing at all and it’s just psychological in my mind. But there’s one thing about it, it seems to work and seems to fit me pretty good. Whatever makes it as good as it is, I don’t know, but I like it.”

Troutman, the 15-year-old Late Model rookie making his second Summer Nationals appearance, rallied from the sixth starting spot to score an impressive runner-up finish. He overtook Feger for the third spot on a lap-seven restart and later squeezed between Wiles and a lapped car to grab second on lap 17. He began to close in on Shirley when the leader caught traffic with two laps remaining, but he ran out of laps to challenge for the lead.

“I was hoping lapped traffic would’ve slowed him up a little more and we could’ve got up to him, but I don’t think we would’ve been able to pass him.” said Troutman, who kicked off his weeklong stint the Summer Nationals with a 16th-place finish at Kankakee on Tuesday. “It was hard to pass unless someone really got held up. That’s how I got to second. I don’t think I would’ve got by (Wiles) if not for those lapped cars.”

Schlenk started third and finished third, but his podium finish didn’t come easy. He slid back to sixth early in the race before charging forward in the second half of the race. He took a couple of looks under Troutman for second as the pair closed the gap on Shirley, but he couldn’t find a way around and settled for third at the finish.

“It was pretty locked down in the middle after it took rubber,” Schlenk said. “Them restarts would kill the guy on the bottom. The top line would just roll, so I was glad to see that last restart. I thought I could pick off one more car, and I ended up picking off two and got back to third.”

The race was slowed by two cautions. The first appeared just as Shirley reached lapped traffic for the first time on lap seven when Bryant Dickinson of Ionia, Mich., spun in turn four. Troy Hahn of Woodville, Ohio, spun in turn four on lap 18 to bring out the second yellow.

Wednesday’s race kicked off four straight Summer Nationals races in Michigan to wrap up the tour’s 2020 season. Action moves to Thunderbird Raceway in Muskegon, Mich., on Thursday before heading to Tri-City Motor Speedway in Auburn, Mich., on Friday and Merritt Speedway in Lake City, Mich., on Saturday.

After the first attempt to start the race was called back, Brian Shirley pulled away to a convincing victory in the first of three heat races. He won by more than a straightaway over Jason Feger and Frank Heckenast Jr. … Rusty Schlenk turned back early pressure from Logan Nickerson before pulling away in the second half of heat two. … Second-starting Garrett Wiles got the jump on polesitter Drake Troutman on the start of heat three and survived race-long pressure from Troutman to take the win. … All three heat races ran caution free with little passing.

Hot laps were scheduled to get under way at 6:30 but were delayed nearly an hour for extra track prep. … The night's modified program has attracted 39 entires. ... Points leader Brian Shirley has switched back to the Rocket Chassis that he used for every tour event until Tuesday’s race at Kankakee. Shirley switched to the backup car after crashing his primary machine during Sunday’s event at Lincoln (Ill.) Speedway. Shirley said the car’s performance “didn’t cut it” during his sixth-place finish at Kankakee, leading him and his team to speed along repairs to his primary car in the Butler pit area Wednesday afternoon. … Bob Gardner had a rough night Tuesday at Kankakee starting with a blown engine while running second in his heat race. Gardner’s crew unloaded their backup car but found mechanical issues with it that prevented Gardner from starting Tuesday’s feature. The team made a stop at Frank Heckenast Jr.’s shop today and swapped to a spare engine in the primary car before making the more than 3-hour drive to Butler. … Colten Burdette of Parkersburg, W.Va., is making his Summer Nationals debut at Butler after making the late decision Tuesday night to make the trip up. “We had some of these UMP tires that have been sitting around a while, so we figured we might as well come up and get some racing in while we can,” said Burdette, who plans to also run Wednesday night’s event at Thunderbird Raceway in Muskegon, Mich., but hasn’t decided if he’ll stick around for the weekend. His brother K.C. will compete in the modified division. He’s chasing national DIRTcar points, which was part of the reason the brothers made the six-hour drive to Michigan.

The DIRTcar Summer Nationals heads to Butler Speedway on Wednesday evening for the first of four Michigan races to wrap up the tour's 2020 season. The evening's $5,000-to-win event is the tour's first ever visit to the southern Michigan oval.

Butler halted weekly Late Model racing in 2009 and since then has only hosted two Super Late Model races: a Sunoco American Late Model Series event in 2015 won by Phil Ausra the and an American Ethanol Late Model Tour race in 2018 won by Eric Spangler. The track is located roughly 60 miles southeast of Kalamazoo about 10 miles east of I-69.

Wednesday's program also includes action for the DIRTcar open-wheel modifieds, but no other support divisions are scheduled to run.