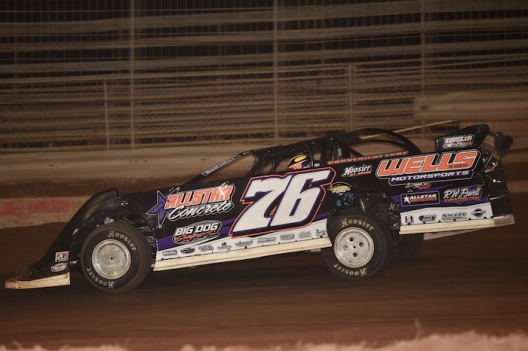 SYLVANIA, Ga. (July 18) — Brandon Overton is making the most of the Schaeffer’s Southern Nationals swing through his home state. The defending series champion from Evans, Ga., led every lap of Saturday’s series event at Screven Motor Speedway, earning $10,053 for his third victory in as many nights.

Overton, who also won Thursday at Senoia (Ga.) Raceway and Friday at Needmore Speedway in Norman Park, Ga., has won four of the tour’s seven races and leads the points standings on the 12-race series.

“I’m just down here doing my thing,” Overton said of his home-state win streak. “I grew up racing down here, so I guess I’m just more relaxed at these tracks. I do better when I more relaxed,”

The current win streak marks the third time Overton has won three straight series events. He’s never won four straight. In fact, no driver has ever won more than three in a row on the tour.

Overton will attempt to change that when the series makes its first-ever appearance at Cochran (Ga.) Motor Speedway on Sunday, and in doing so, complete a sweep of the tour’s four-race Georgia swing.

“That would be pretty dang cool,” Overton said of the prospect of completing the Peach State sweep. “But I’m happy with what we’ve done. Even if we don’t win another one on this deal, I’m still happy with what we’ve accomplished and happy that we came down here and put on some good shows for our fans.”

Overton was never seriously challenged in leading all 53 laps of Saturday's feature. Fifth-starting Mark Whitener of Middleburg, Fla., closed the gap when Overton caught traffic during the final laps, but he ran out of time and settled for second.

After clearing Bailes on the race’s initial start, Overton easily pulled away on all of the race’s restarts. His only obstacle was lapped traffic, which twice came into play. Overton diced his way through the slower cars when he reached them midway through the race, but he struggled to do the same when he caught them in the closing laps.

That allowed Whitener to close within a few car lengths, but he couldn’t get close enough to give Overton a serious challenge.

“I really couldn’t pass the lapped cars, so I just kept my distance and tried to stay smooth and not spin my tires,” Overton said. “I knew (Whitener) had a hard tire on. When I started scooting pretty bad getting into one, I knew he’d be coming. I was just doing my best not to blast it in there and slide up and let him drive by me.”

Starting from the fifth position, Whitener moved up to second by lap 25. After initially losing ground to Overton, Whitener began to reel him in the race’s final 10 laps before his run fell short.

“I felt like I could roll the center of the corner, but he was doing a good job keeping his car straight,” Whitener said. “If there had been five more laps, maybe he would’ve got his tire hot and I could’ve got him in traffic. But no, I think the best car won tonight.”

Whitener’s runner-up effort was his first top-five finish in five appearances on this year’s tour. It was a much-needed momentum boost for the veteran racer and his team, who suffered a string of bad luck and disappointing results through the first half of the series.

“I’ve had a good car, I just keep doing stupid stuff,” Whitener said. “I just needed to calm down and finish where the car let me finish. I was aggressive where I needed to be on the starts, but tonight I was really concentrating on running my race.”

Notes: Overton has 17 career Southern Nationals victories. His previous three-race win streaks came in 2017 and 2018. ... Two other drivers have won three straight series races: Chris Madden in 2007 and Donald McIntosh in 2017. ... The race's first caution occured with 13 laps complete when Jimmy Sharpe Jr. slowed. ... Michael Page spun on the ensuing restart. ... There was lap-22 caution Wil Herrington spun in turn four. ... Seventeen cars were running at the finish with 11 cars on the lead lap.

The track has elected to start all 26 cars in the feature, meaning no consolation race will be ran. ... Ross Bailes led all the way in heat one. The race was slowed when John Baker went for a spin in turn two, collecting Tyler Millwood, Dalton Polston,  and Michael Page. The race had to be red flagged while track crews untangled the mess. Millwood and Polston went exited the race, while Page and Baker were able to continue. ... John Henderson ran unchallenged in winning heat two while Jake Knowles turned back challenges from Trent Ivey to finish second. ... Brandon Overton cruised in heat three, winning by nearly a straightaway over Donald McIntosh. ... Will Herrington ran third for most of heat three before slowing on the final lap. ... Pearson Lee Williams pulled away in the final heat, while Zack Mitchell and Chris Madden battled hard for second and took the checkereds side by side. It appeared that Mitchell beat Madden by a nose, but transponder scoring showed Madden ahead. After some conferring, officials gave the position to Mitchell. ... Casey Roberts was a scratch from his heat race.

Ross Bailes took fast time honros for the second night in a row with his lap of 14.903 seconds. ... Time trials finally rolled off at 9:50 p.m. … Michael Page never got up to speed during his qualifying run and only made one lap. … Jeff Smith caught the wall in turns one and two on both of his laps. The contact on the first lap was minor, but the contact on his second lap caused him to come to a stop along the back straightaway wall. … John Henderson spun in turn two on his second lap.

The program has experience multiple delays in order for track crews to combat dry conditions after an extremely hot afternoon. Hot laps didn't get started until just after 7:30 p.m. and racing didn't start until 9:30. ...Brian Nuttall Jr. of Claxton, Ga., and Ahnna Parkhurst of Evans, Ga., have both rejoined the tour after skipping Friday's race at Needmore. ... Crate Late Model standout Wil Herrington of Cochran, Ga., made his Super Late Model debut Friday at Screven. His night went well until contact with Chris Madden while battling near the top five in the feature sent both cars spinning. He came back to finish 10th.

The Schaeffer’s Southern Nationals moves to Screven Motor Speedway in Sylvania, Ga., for round seven of the tour’s 12-race schedule. Saturday’s event at Screven’s tight 3/8-mile oval will pay $10,053 to the winner and features a full program of qualifying, heat races, consolation races and a 53-lap main event.

The series enters the second half of its campaign with a new points leader. With back-to-back victories on Thursday and Friday, defending series champion Brandon Overton of Evans, Ga., has moved ahead of five-time series champ Chris Madden of Gray Court, S.C.

Overton is looking for his third straight series victory and his fourth on this year’s tour at one of his home tracks. Meanwhile, Madden is looking to bounce back after a calamitous night at Needmore that saw him spin twice in the 53-lap feature after contact with other drivers. While he recovered to finish seventh in the race, it was his first finish outside the top two on this year’s tour.

The move to Screven, nearly 200 miles northeast of Needmore Speedway, brings a handful of new entries on this year’s tour. Those include 2018 series champion Casey Roberts of Toccoa, Ga., and Zack Mitchell of Enoree, S.C.