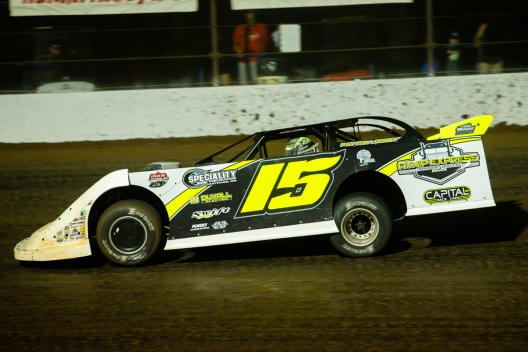 WHEATLAND, Mo. (July 18) — Payton Looney had a difficult time coming to grips with what he accomplished Saturday night at Lucas Oil Speedway.

Winning his home state’s marquee event — the 28th Show-Me 100 presented by ProtectTheHarvest.com — in just his fifth season of Super Late Model competition? It all just seemed too good to be true.

“Man, I really couldn’t believe it at first,” said Looney, whose only previous start in the Show-Me 100 finale came in 2017 when he finished 30th. “None of this ever sinks in right away, and people that say it does, they’ve either one too many of ‘em or they’re lying. It’s just surreal.”

But Looney, 26, of Republic, Mo., did indeed capture the race co-sanctioned by the Lucas Oil Late Model Dirt Series and Lucas Oil Midwest LateModel Association — and in convincing fashion. He grabbed the lead for good from Shanon Buckingham of Morristown, Tenn., on lap 20 and was never threatened again, building as much as a straightaway advantage en route to the $20,000 top prize.

Looney swept the night, setting fast time and winning his heat race before thrilling the large partisan crowd that packed the 3/8-mile oval’s grandstand for the coronavirus-delayed century grind. Aside from ceding the lead to Buckingham for laps 8-19, Looney was flawless in circling the track with his Atnip Enterprises Capital Race Car and beating first-time Wheatland visitor Kyle Strickler of Mooresville, N.C., to the finish line by 1.677 seconds

Rick Eckert of York, Pa., made one of the best advances in the race with his 16th-to-sixth run in Texan Allen Murray's car while Lucas Oil Series points leader Jimmy Owens of Newport, Tenn., started 11th and quietly moved forward to finish seventh.

The race’s lone caution flag flew on lap 28 when Tyler Bruening of Decorah, Iowa, slowed with a flat left-rear tire.

While Looney’s victory certainly qualifies as an upset, he was nonetheless well positioned for success when he entered the event. His MLRA hot streak had him riding high, and just under one month ago, on June 24, he led an MLRA feature at Lucas Oil Speedway until Johnny Scott of Las Cruces, N.M., passed him with two laps remaining to steal the victory in an outcome Looney called “heartbreaking.”

“I knew that once I qualified good and once I won that heat race that I had a chance there to, you know, ride around and have a good finish,” Looney commented. “You never know if you’re gonna win. You always like to think you can, but I don’t know … everything just kind of played in my favor.”

That included the uninterrupted 72-lap stretch of racing that closed the feature. Looney had a straightaway on Buckingham by shortly after the halfway mark and didn’t see his edge dip below 2 seconds until Strickler made up some ground in the final circuits.

“That long green flag run really helped me, and I was able to get a lead,” said Looney, who started his racing career in Wheatland’s ULMA Late Model division in 2013 when he was 19. “And once I got that lead … the racetrack was really moving to the bottom and I was getting worse, but fortunately I guess everybody was getting worse.

“I really didn’t want to see a yellow (late in the distance),” he added. “I was scared to death if a yellow come out they’d blow by on both sides, I felt that bad.”

Looney’s trepidation over his car falling off gave him some anxious moments as the laps counted down.

“I really didn’t get like, ‘Where’s the white (flag)?’ until like 10 to go,” Looney related. “We’d go back by and I’d be like, ‘Really? We only ran a lap? There’s still nine to go?’ I remember seeing six (laps left) and then I quit looking at it, and then the flagman’s got to give you five to go and I’m like, ‘Well, OK, you ran another lap.’

“Once I got the two-to-go sign I was looking to my left and making sure everybody was still rolling and nobody was stopped (to bring out a caution). And we took the white and I was just gonna park it on the bottom.”

Moments later Looney flashed under the checkered flag uncontested, putting him in a dream-like state that seemed to ratify the newfound mindset he now employs.

“I’ve taken a whole different approach to racing this year,” said Looney, who was met in victory lane by a legion of family members — including his wife and their two young children — and friends. “I used to put so much pressure on myself because I thought I could win races like this, and when stuff would happen I’d beat myself up over it.

“I just come to the point where I’m really blessed and fortunate and I’ve got a really good wife and two beautiful kids and I’ve got a good job, so the sun’s coming up tomorrow and whatever happens, happens.”

Strickler, 36, shifted away from the inside lane most of the field took to running as the race wore on and used an outside charge to overtake Buckingham for second on lap 82. He proceeded to cut in half his approximately 3-second deficit to Looney over the remaining distance but couldn’t get close enough to pressure the winner.

“We had an awesome race car and I tried blasting that top and made up a lot of ground, but Payton was very good,” said Strickler, who earned $10,000 for his career-best Lucas Oil Series finish. “So congrats to him. That’s awesome, local boy to get the win, and I’m real happy for him … and I’m really proud of my team for a second-place finish. This is awesome, coming out on the road with the best in the business and being able to compete.

“I think we definitely had a shot at the win tonight,” he continued. “I think if we could’ve got a caution we would’ve made it exciting, but Payton was pretty good out in clean air too.”

The 47-year-old Buckingham was the only driver to pass Looney during the feature, but he gave the lead back to the eventual winner on lap 20 and wasn’t able to stay within striking distance of the top spot after lap 40. He still was very pleased with his podium finish, which marked just his second top-five finish of the 2020 Lucas Oil Series campaign in his Double Down Motorsports Longhorn car.

“I think we possibly had a good enough race car to win,” said Buckingham, whose only previous Show-Me 100 feature start resulted in a 14th-place finish in 2018. “Obviously (Looney) used more of the racetrack than I did, watching him get by and the way Strickler got by. The lapped cars definitely jammed me up a little bit (but) I should’ve put it in a couple places that maybe I was a little scared to, so I might have left a little on the table. But I’m not taking anything away from (Looney). He was good. He kept a straightaway on me most of the time.

“But man, I’m happy. We were really bad last night (Friday’s Lucas Oil event at Tri-City Speedway in Granite City, Ill.) and we’ve had some really bad runs this year, so I’m tickled to death just to be competitive and be up there racing for the lead.”

Lap 65: Eckert inches past Owens for sixth racing a bit higher on the track than the mostly inside-hugging field; Looney leads Buckingham by a straightaway.

Lap 82: Strickler moves to outside and takes second from Buckingham; trails Looney by straightaway.

The 28-car field for the Show-Me 100 began rolling for pace laps at 10:08 p.m. CT. ... Polesitter Payton Looney, who enters the night having won three of the last five MLRA events, will make just his second career start in the Show-Me 100 headliner. A 30th-place finisher in the race’s 2017 edition, Looney will look to join 1999 victor Terry Phillips as home-state winners of the Show-Me 100. … Seven of the 16 heat-race qualifiers are making first-ever Show-Me 100 feature starts: Ricky Thornton Jr., Kyle Strickler, Chris Ferguson, Tyler Erb, Kolby Vandenbergh, Johnny Scott and Tanner English. … Veterans Shane Clanton and Rick Eckert are in a Show-Me 100 finale starting lineup for the first time at Lucas Oil Speedway. Both drivers made multiple Show-Me 100 starts when the event was held at West Plains Motor Speedway (now Legit Speedway Park); Eckert’s six starts at West Plains yielded a best finish of sixth (2004) while Clanton’s two starts brought him a top finish of 18th (2006). … Billy Moyer and his son, Billy Moyer Jr., start side-by-side in the 10th row. … Tony Jackson Jr.’s No. 56 machine was sidelined for the night at his home-state track due to terminal engine trouble that developed during hot laps. An MLRA provisional allowed him to start the feature, however, driving Mason Oberkramer’s car. … Other provisional starters are Devin Moran, Kyle Bronson, Tyler Bruening, Stormy Scott and Jeremiah Hurst.