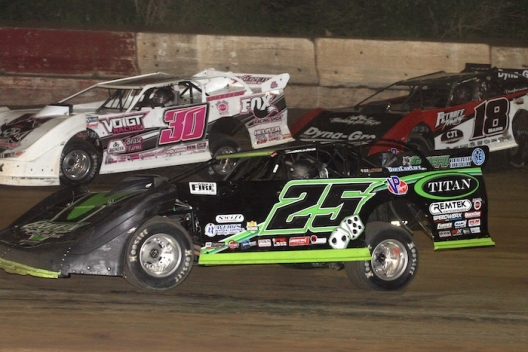 "I don't know, I just kept picking ’em off and picking ’em off, and a couple of ’em would wreck and go to the back, and the next thing I know, I'm sitting there like sixth or seventh. I'm like, ’Man, we're pretty good,’ said Feger, who rallied to lead the final 10 laps of the Aggressive 50 for his 20th career series victory. "I don't know. I just kept it on that bottom and kept digging away. Honestly I can't believe it worked out for us."

Using the low groove with most of his competitors riding the high side, Feger broke into the top five just before halfway, then kept rolling toward the front, eventually going by leader Shannon Babb on the backstretch of the 41st lap amid traffic and pulling away to win by more than five seconds over runner-up Bobby Pierce.

Feger, who had a single top-five finish in six series races heading to Highland, earned $10,250 for his first series victory since 2018.

Oakwood, Ill.’s Pierce finished second with Babb, of Moweaqua, Ill., settling for third while bidding for his sixth career series victory at Highland. Pierce led only the first lap while Babb led laps 18-40.

Pole-starting Daryn Klein of Fairview Heights, Ill., led 16 of the first 17 laps, but he spun between turns three and four after a slower car switched lanes in front of him. His spin drew a caution and he decided to head to the pits.

"I just missed the setup hot-lapping and qualifying and buried myself," he said. "We just kept making changes and getting better all night long. We just tightened the heck out of it in the feature there, and I just thought I'd keep it on the bottom and just try not to get into any wrecks ... it's just a tight place."

When Feger reached the top five near mid-race, he still had to chase down the leading Babb with Pierce and Brian Shirley right in the mix. When he reached second behind Babb in the race's late stages, it appeared lapped traffic might block Feger's low groove, but he threaded his way through, taking the lead on the backstretch by racing between the high-running Babb and a slower car.

"You can kind of judge how fast you're catching people, so I kind of had an idea there. We've got a shot here if some things go our way. Honestly, I didn't know if it stayed green if I'd be able to do it," the winner said. "The car was really maneuverable. I could get in the middle, right in the crumbs and stick and have drive, too. That helped me out, I think. It didn't look like them guys could move around as well as I could, at least on the bottom and the middle. I never even had to go to the top.

"I don't know. It's crazy. It's hard enough to win from the front row let alone from 16th. That doesn't happen often, but it's a pretty crazy feeling."

After watching Feger's feat, Pierce second-guessed his decision to stick with the high groove most of the race.

"Feger, he ran a great race there on the bottom. I wish I would’ve moved down there and really blocked and maybe I could've caught Babb," the runner-up said. "I figured Babb was going to run away with it there, and he got in that lapped traffic and seemed to start slowing down. All in all a second-place run is pretty good.

"We were right there. If I could've got down on the bottom sooner and rolled with Feger, maybe I could've gotten back up top and given them something."

Babb, who inherited the lead when Klein spun out of contention, fought off Shirley on the ensuing restart and kept Pierce in check, but he couldn't stop Feger's charge.

"The top, there was a lot (of traction) there tonight, more than usual, so I never did feel like I was stuck real, real hard, good enough to run the bottom," Babb said. "I'd enter down there (in the low groove) and just couldn't stay down there. So anyhow, I ran my laps on the top most of the way and got into traffic. I knew I was going to have to struggle passing ’em if we got there. The good thing was 90 percent of the guys were on the bottom, so we didn't have too much trouble.

"Jason, it really looked like his tire come to life and his car come to life right there at the end, and he checked out. There was no doubt about it. He had the best car there."

Besides the yellow flag for Klein, two other cautions slowed the action, the first for outside front-row starter Michael Kloos's spin between turns three and four while running third on the second lap. On the ensuing restart, Trevor Gundaker, Frank Heckenast Jr. and Matt Bailey got stacked up between turns one and two to draw another yellow.

Notes: Feger’s previous series victory came July 12, 2018, at I-96 Speedway in Lake Odessa, Mich. … Polesitter Daryn Klein was searching for his first career series victory. … The series was originally scheduled for Quincy (Ill.) Raceway on Sunday, but because coronavirus restrictions have kept the track closed, promoters moved the event to Randolph County Raceway in Moberly, Mo., which is scheduled to host the series for the first time.

Heat winner Daryn Klein drew the pole for the 50-lap feature alongside part-time teammate Michael Kloos. Bobby Pierce and Shannon Babb start on the second row. … A medical issue on the grandstand side just before heat races briefly delayed the start of the racing program. … Former Highland Summer Nationals winner Chad Zobrist spun in turn four while running in a transfer spot in the final heat. … Shannon Kuhn lost heat-race transfer spot in a turn-one scramble on a restart in the second heat. … Track workers took the time to do a little maintenance on the racing surface. … Five cars using No. 4 were entered at Highland, three in the first heat. ... Chad Zobrist spun in turn three at the outset of the consolation race, triggering a pileup. Mark Voigt used an early move on the outside to take control and race to victory.