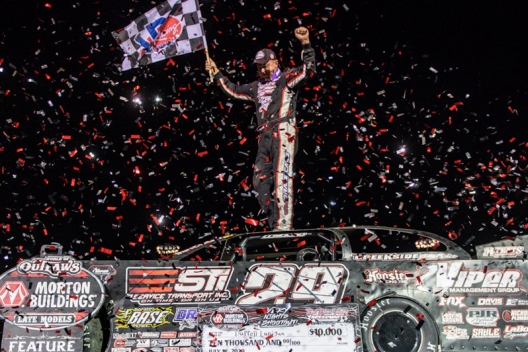 Taking the lead from polesitter Ricky Weiss of Headingly, Manitoba, on lap 21, Lanigan led the final 30 laps of the caution-free main event to pick up his first series victory since Sept. 21, 2019 at Selinsgrove (Pa.) Speedway. After grabbing the lead with a power move around the outside as they races down the backstretch, Lanigan drove away to a dominating victory, winning by 5.831 seconds ahead of Sheppard of New Berlin, Ill., while lapping up to the eighth-place car. Lanigan earned $10,000 for his 74th career WoO triumph.

“I knew once we got up there (on the outside) and got it packed in a little bit we’d be able to get going,” said Lanigan. “We got it worked in up there and they actually started throwing stuff up there in the middle (where) you could run through the middle. It’s been a little long (time) coming to get up here (in victory lane), but we’ve worked hard all year and these last few months we’ve really been coming on and I’m excited for the rest of the year.”

Weiss, a former Red River Valley track champion looking for a national touring series victory at a track where he cut his teeth, set the overall fast time, won his heat and drew the pole position for the feature. He jumped into the lead at the onset and pulled away from fellow front-row starter Lanigan and fifth-starting Dennis Erb Jr. of Carpentersville, Ill., who shot to third on the opening lap.

Lanigan chased Weiss through lapped traffic until making his move as they exited turn two. Once in front he was never challenged as he cruised to his first win on the tour in nearly 10 months — 301 days to be exact. With the victory, Lanigan halted Sheppard’s four-race win streak that began at Cedar Lake Speedway in New Richmond, Wis., on July 4 and went through his July 14 win at Gondik Law Speedway in Superior, Wis. Lanigan, who had solid finishes of fifth, ninth, second, ninth and fourth over the last five races before Red River Valley, would be happy to start a streak of his own now.

“We’re second overall in all-time wins (behind Josh Richards),” said Lanigan, who closed to within just four wins of Richards on the WoO win list. “I’d like to get back up there on top and see what we can do. I can thank these guys (enough). Barry (Wright) comes on the road and helps us. It’s all for them guys. I’m telling you, I just get to drive it and they work on it.”

Sheppard swept the series’ four consecutive events in the Badger State, but fell one win shy of tying his personal best win streak of five, which he accomplished twice last season. He battled Erb for a couple of laps early before slipping by Dillard and eventually Weiss. He said he wasn’t sure if getting to second sooner would have helped him in tracking down Lanigan.

“We had a pretty good car there. I didn’t really know where (Lanigan) was running,” said Sheppard. “I think I probably should have moved up a little bit sooner. I felt pretty good up there, but all in all, it was another good night for us. Congratulations to Darrell, he’s been really tough lately and Ricky also.

“I was pretty far behind (Lanigan) there … maybe a caution or two (would have helped) in that race and maybe we could’ve did something different. But all in all like I said, it was just a good night for us and we’ll take it and move on to (River Cities on Sunday).”

Weiss was just happy to be standing on the podium at race’s end, despite leading nearly half the feature. A faulty battery cable connection and a potentially loose fuel cell cap nearly sidelined his effort before the main event got started.

“I’ll take (third) considering that the starter wire fell off in staging I guess and then we’re pacing around there and Cade (Dillard) was pointing and saying you’re dropping some sort of fluid and we stopped and didn’t see where it was coming from so we kept going. I guess it made just enough … 50 laps,” said Weiss. ““It’s just another consistent night. Hat’s off to the guys. They worked real hard and we had a really good car. On to tomorrow and hopefully we can get a win.”

Notes: The World of Outlaws Morton Buildings Late Model Series visited Red River Valley Speedway for the fifth time in series history. … It was scheduled as the second night of the tour’s weekend doubleheader, but Friday’s opener at River Cities Speedway in Grand Forks, N.D., was rained out and reset for Sunday. … Morgan Ward of Watertown, S.D., who won her consolation race, became just the third female to start a World of Outlaws Late Model feature. The 28-year-old daughter of driver Scott Ward, finished 21st, three spots ahead of her dad. … Steve Francis of Bowling Green, Ky., won three of the four previous WoO visits to Red River, winning in 2004 and twice in ’05. … Kevin Thompson of Grand Forks, N.D., won the tour’s first visit to the Red River Valley Fairgrounds oval in 1989. Thompson’s lone career WoO triumph, which came ahead of Hall-of-Famers Billy Moyer and Scott Bloomquist, paid $4,000-to-win.