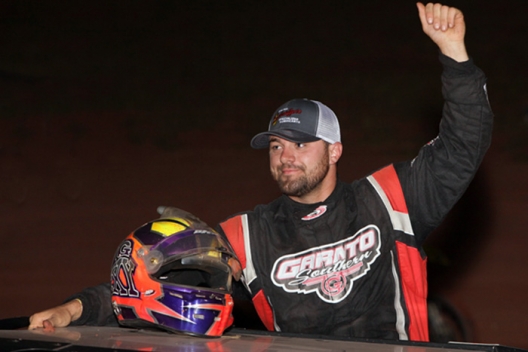 NORMAN PARK, Ga. (July 17) — Putting his past experience at Needmore Speedway to good use, Brandon Overton of Evans, Ga., overtook Donald McIntosh of Dawsonville, Ga., in traffic on lap 38 of Friday’s Schaeffer’s Southern Nationals feature at the south Georgia track and led the remainder of the 53-lap for a $10,053 payday.

Stuck behind McIntosh in the track’s low groove as the laps counted down, Overton was waiting for the leaders to reach traffic that would slow McIntosh enough to allow him to make a move to the outside.

He knew from experience that the move would work.

“I’ve made a lot of laps around this place in a Crate car and other stuff, so I kind of knew that I could pull it off,” said Overton, who was one of the few Southern Nationals regulars with any experience at Needmore’s before the tour visited it for the first time on Friday. “I had moved up there and felt it earlier in the race and I knew it was there. I was just waiting. I knew as soon as we’d get to the first lapped car, I was gonna blast it.”

Overton did indeed blast the high groove. When the leaders caught the tail of the field on the front straight away at the completion of lap 37, Overton didn’t hesitate. He jumped to the high side entering turn one and drove around both McIntosh and the lapped car that was impeding the bottom line.

Overton never looked back from there, opening up a lead of more than two seconds by the time he crossed the finish line for his third victory on this year’s Southern Nationals tour and his second in as many nights.

“It’s fun when a plan comes together like that,” said Overton, who also won Southern Nationals stops at Senoia (Ga.) Raceway on Thursday and Wythe Raceway in Rural Retreat, Va., on July 11. “But you know, a couple more cautions and we never would’ve caught traffic and I wouldn’t have had the chance to even try it. It all worked out in our favor for sure.”

In his first appearance at Needmore, McIntosh settled for the runner-up finish after twice spending time out front. He took the lead from his outside pole starting spot before giving up the position to polesitter Ross Bailes of Clover, S.C., on lap 11. McIntosh later inherited the lead when Bailes slowed with a flat right-front tire on lap 20.

As he closed in on lapped traffic in the second half of the race, McIntosh made up his mind not to leave the bottom groove.

The decision cost him.

“When you’re leading and the track’s like it was, it’s hard to leave that rubber,” said McIntosh, who earned his best series victory of the year with his runner-up effort. “If you leave the rubber and you end up losing two spots you feel really stupid. And if you don’t leave the rubber and they go right by you, you end up looking pretty stupid then too. It’s almost easier to be in second in that situation. ”

Overton gained ground in the series points chase thanks to points leader Chris Madden of Gray Court, S.C., recording his first finish outside the top two on this year’s tour after getting caught in multiple scrapes. The five-time series champion was running fourth on lap 13 when contact from Mark Whitener of Middleburg, Fla., sent both cars spinning in turn four. Madden was able to keep his car moving and was given the fourth position back for the restart.

Madden was sent spinning again on lap 20 after contact with Wil Herrington of Cochran, Ga. Madden couldn’t keep his car moving this time and was sent to the tail of the field. He recovered to finish seventh.

Bailes, who was the night's fastest qualifier and winner of the first heat race, ended up sixth in the final rundown after suffering a flat tire for the third race in a row.

The Southern Nationals continues its four-race Georgia swing with a visit to Screven Motor Speedway in Sylvania, Ga., on Saturday and Cochran (Ga.) Motor Speedway on Sunday.

Notes: Overton earned his 16th Southern Nationals victory. … The race took nearly 45 minutes to complete. Ten cars were running at the finish with all 10 on the lead lap. … John Henderson of Aiken, S.C., ran as high as third midway through the race, but he was shuffled back in a restart and later slowed with a flat right-rear tire to cause a lap-47 caution.

Ross Bailes ran away with the first heat race, winning by more than a straightaway over Chris Madden, who was just ahead of John Baker. … Second-starting John Henderson ran side by side with Brandon Overton for the first lap of heat two before Overton pulled ahead and pulled away. … Tyler Millwood kept Donald McIntosh in his sights during heat three, but he never got close enough to make a move. Cla Knight started from the outside pole but faded to fourth. … Mark Whitener had the most convincing heat win, crossing the finish line more than three seconds ahead of second-place Wil Herringto. ... Brian Conner led every lap of the consolatin race with Parker Martin just behind him. ... The only caution in prelimenary action came when Kyle Bridges spun on lap four of the consolation race. ... Steven Roberts and Clay Harris both had engine problems in hot laps and scratched from the event.

Located behind two farm fields and accessed via dirt road, Needmore emerged on the Super Late Model scene this season after not hosting a Super race for more than five years. The track previously hosted an unsanctioned $6,000-to-win Super Late Model event in May that was won by defending Southern Nationals champion Brandon Overton of Evans, Ga.

Friday’s program will see a full Super Late Model program including qualifying, heat races, consolation races, and the 53-lap feature. Only three divisions are in action with 602 Sportsmans and Enduros joining the Super Late Models on the program.