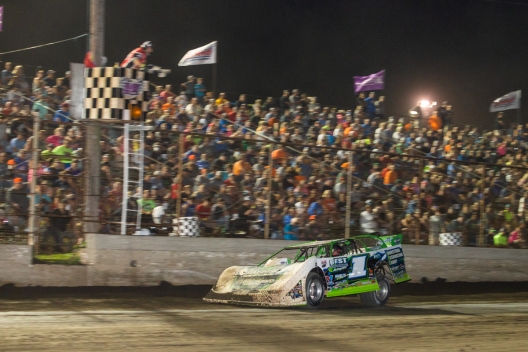 GRANITE CITY, Ill. — There’s no doubt Tyler Erb loves of Tri-City Speedway. Like in the children’s story about Goldilocks, the track configuration is just right.

“It’s not too big … it’s not too small,” the New Waverly, Texas, driver said in a Goldilocks-inspired description of the 3/8-mile oval near St. Louis for the second straight season.

The track was “just right” for Erb to stalk early leader Billy Moyer Jr., slip by amid traffic on the 22nd lap, then led the rest of the NAPA Know How 50 for his second Lucas Oil Late Model Dirt Series victory in as many seasons at Tri-City.

Erb, who notched his second series victory of the season and ninth of his career, took the checkers 2.859 seconds ahead of Moyer at the checkers while reigning series champion Jonathan Davenport of Blairsville, Ga., was third. Shane Clanton of Zebulon, Ga., was fourth in his feature debut at Tri-City while Clanton’s Skyline Motorsports teammate Tyler Bruening of Decorah, Iowa, notched his first series top-five finish of the season.

Series points leader Jimmy Owens of Newport, Tenn., who started 17th, was up to fifth on the 29th lap when he got high in the corner and contact from Clanton flattened his left-rear tire and sent his car spinning. He pitted for a new tire and ended up 15th.

Rugged conditions proved difficult for drivers to find racing room and a smooth line around the track, but Erb patiently tracked Moyer through the first half of the race before making his winning move.

“I knew I had to survive,” Erb said. “That was going to be half the battle. When we took off, I knew I had a really good car. I expected (the track) to come back the way it did. (Track co-owner Kevin Gundaker) had it rolled in really nice before we started.

“When I was in second, I knew I just needed to beat (the third-starting driver) there into the first corner and just keep following Billy. Man, it was a handful. He had a good car, but he kept messing a little bit off of (turns) three and four. I was just biding my time, biding my time, and when I thought it was the right time to go, I went. I know I rubbed him there a little bit, but it’s tight out there, there’s not a whole lot of room.”

Moyer, the Batesville, Ark., driver looking for his first career Lucas Oil victory, had difficulty with slower cars in trying to keep Erb behind him.

“I just didn’t judge lapped traffic right. They didn’t do us any favors there,” Moyer said. “But all in all, to run second with a heckuva crowd, I love racing in the St. Louis area, and the Lucas Series done a heckuva job getting the track (in shape). The Gundakers couldn’t help out with the rain. It’s part of it. So I’m glad they just worked hard to get us the best surface and the best show they could put on.”

Davenport, who battled a rough stretch in June, earned his third series podium finish of July at Tri-City after starting sixth.

“It really was (tough to pass). It kind of laned up right around the cushion there. It was even tough to pass lapped cars,” Davenport said. “I finally, I got to moving around a just little bit early, and I started going above the hole getting into (turn) one, and I think Randall (Edwards), Tyler’s crew chief, saw me and moved him up. He got going pretty good there and got by Junior in lapped traffic.

“I felt like we were a little better than Junior, but it was just so hard to pass. A top-three here at Granite City, we generally have pretty bad luck here, so if we’d have won that heat race and gotten to start outside pole, it might’ve been a different story.

“I’m just really proud of my guys. From a month ago to what we’re doing now, it’s a huge turnound,” Davenport added, saying the team “just needed a little bit of luck on our side. We finally got some speed and we’ll get this car back to victory lane before long.”

Besides the caution for Owens, the only other yellow appeared on the sixth lap when Kyle Strickler spun exiting turn two after making contact with Tyler Erb while they battled for the second spot. Strickler retired.

Notes: Erb gave the checkered flag to a young fan after the victory. … In victory lane, he joked with Best Performance Motorsports crew chief Randall Edwards about buying the track Kevin and Tammy Gundaker recently put up for sale. “If anybody wants to be an angel investor, we’ll take it,” Erb joked with Lucas Oil Racing TV pit reporter Dave Argabright. … Sixteen drivers completed 50 laps. … Rick Eckert of York, Pa., finished sixth as the top finishing non-Lucas Oil Series regular. … Daryn Klein of Fairview Heights, Ill., elected to start on the tail of the feature and was the first retiree.