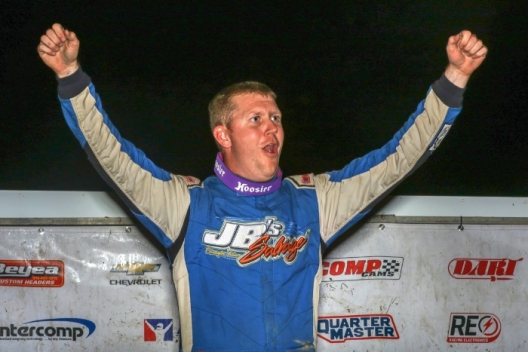 But by the end of his first-ever visit to the high-banked, third-mile oval, the 33-year-old driver from Bloomington, Ind., felt right at home.

Charging from the ninth starting spot, Robinson ducked underneath Brian Shirley of Chatham, Ill., rounding turns one and two on the final circuit and beat the race-long pacesetter back to the finish line to score a dramatic victory worth $5,000.

“That was a lot of fun,” said Robinson, who drove his family-owned MB Customs car. “At the beginning — well, actually heat race time — I wasn’t so sure of what to expect. I’d never been here, and was walking around, asking (Jason) Feger and other guys what gear to run. I like that challenge, but it just adds another level of difficulty.”

Robinson mastered the inside lane around the Spoon River layout, using the groove to steadily advance forward through a competitive field enhanced by the presence of several Lucas Oil Late Model Dirt Series regulars. He overtook Tyler Erb of New Waverly, Texas, for second on lap 29 and proceeded to challenge Shirley several times before making his winning move in dramatic fashion.

It was Robinson's first triumph of the coronavirus-interrupted 2020 season and his third career Summer Nationals win. Both of his previous Hell Tour checkered flags came at Oakshade Raceway in Wauseon, Ohio, in 2017 and '19.

Shirley, who shot off the outside pole to grab the lead from polesitter Bobby Pierce of Oakwood, Ill., at the initial green flag, tried to fight back around the outside of turns three and four on the final circuit but fell 0.326 of a second short at the finish line. It was the second straight runner-up finish on the Hell Tour for the three-time and defending series champion who pilots Bob Cullen’s XR1 Rocket machine.

Tyler Carpenter of Parkersburg, W.Va., ran as high as second before settling for a career-best Summer Nationals finish of third in his Kryptonite Race Car. Billy Drake of Bloomington, Ill., marched forward from the 12th starting spot to place fourth in Ray Neltner Jr.’s familiar No. 75 after slipping past Erb on the final circuit. Erb, who started third and spent several circuits running second after the halfway mark, settled for a fifth-place finish.

Pierce ran second for the race’s first 16 laps before slowing and bringing out a caution flag on lap 19 because he thought his car was leaning over due to a deflating left-rear tire. His team found that the tire wasn't flat, however, and he returned and went on to finish 10th.

Robinson emerged as a contender early in the distance, cracking the top five by lap nine. He only got better after that.

“Once I figured my car out a little and saw what the tires were gonna do, I could run a little bit harder and kind of got in a rhythm there,” Robinson said. “The cautions fell our way … we got lined up on the bottom on the last one (on lap 19), and then the lapped car (that hampered Shirley late in the race) kind of worked out too.

“I didn’t know if I was gonna be able to get to (Shirley), to be honest,” he continued, noting that he had several lengths to make up on Shirley after securing second place. “He was so good and has a lot of laps around here and is a really good racer, so I just didn’t know. But if I hit it right I knew I was running better lap times than him, and I felt like he was kind of fading a little bit in that black. I was doing everything I could.”

Robinson was on Shirley’s back bumper at the two-to-go signal. Then Shirley, 39, suddenly altered his trajectory through turns one and two, coming off the outside rim he had been running to test Robinson’s lower lane.

“I think the (key) moment really was when we came to two-to-go and Brian changed his line,” Robinson analyzed. “He came off the top, and it kind of gave me a little more hope that I was gonna be able to snooker him there on the bottom.

“I think his right-rear tire probably got a little hot from running that black (groove on the outside), and he slid a little more than I was and I knew I had more traction than him. So if I played it right — and that doesn’t always happen — the weight’s on the driver’s shoulders at that point, and I’m just glad I was able to pull it out.”

Robinson described the final lap: “He slid in (turn one) and I knew I was gonna get under him. I just didn’t know how low he was gonna go. I got it set in there and he left me a lane and I filled it. I gassed up a little earlier than him and was able to turn, but when I got all the way up and filled the lane he left me, it was kind of crumby there and the right-front got in that crumbs and I gassed up … I came up into him, there’s no doubt, but at that point in time I was already a half car length ahead of him and I had no choice but to stay in the gas.”

As Robinson added: “If I would’ve lifted, I wouldn’t have won.”

Robinson was certainly ecstatic after pulling off the victory, but he did express a tinge of regret over making some contact with Shirley as he raced into the lead.

“Hopefully he’s not upset, but it’s the last lap,” Robinson said. “But it’s part of it, it’s part of Dirt Late Model racing. The fans got a good show out of it and we’ll go on to tomorrow (the Summer Nationals event at Illinois’s Farmer City Raceway) and see what happens.”

Shirley didn’t hold anything against Robinson.

“I was out there running pretty, running my own line,” Shirley said. “And then once I started catching (Jason) Feger (to lap him), I don’t know, just the air … my right-rear tire started getting hot too. I could feel it starting to vibrate.

“I could see K-Rob down there (challenging on the inside) probably the last eight or 10 laps or so. I mean, he was right there. I felt like I couldn’t gain on Feger and I knew K-Rob was pretty good in the middle, so I just tried to go down there (low in turns one and two on lap 38) to see what I could do … and we just came up a couple laps short.

“I mean, he didn’t do anything I probably wouldn’t have done (to make the pass). It wasn’t like he went in there and took me out or took my front end out. We kind of just went in there together. He pushed up, and it just kept us hung up on the right side. But, you know, if I’m gonna be mad about that I need to go home because there’s a lot worse type of racing going on.

“We’ll work on our stuff,” he added. “We gotta get better. He caught us, and there’s no reason to whine. We’ve gotta to a better job setting our car up.”

The 29-year-old Carpenter, meanwhile, was very upbeat after putting himself on the podium for the first time after what had been a difficult and frustrating opening four nights of his first-ever attempt at the grueling Summer Nationals. He actually reached second place on lap 16 as Pierce slowed and was still there when the caution flag flew on lap 19, but after ceding second to Erb on the ensuing restart he slipped to fourth until grabbing third from Erb with three laps remaining.

“First time being here, I gotta give these (track prep) guys props,” Carpenter said. “I wasn’t sure how good it was gonna race. It seemed like early in the night there was a lot of fluff up top, but I’ll tell you what man, that thing cleaned up and raced really well. I was able to rail the cushion, run right through the center, right down against the yuke tires. If you had a car that was maneuverable, it was gonna work.

“I really wanted the win, but I’ll tell you what, I’ll be tickled to death with a third place. I’ll take that home with a smile all day long.”

Three caution flags slowed the feature. Jason Feger of Bloomington, Ill., triggered the first one on lap 16 when he spun to the inside of turn three while battling for position with Shannon Babb of Moweaqua, Ill. Stormy Scott of Las Cruces, N.M., had problems on the backstretch on lap 17 before Pierce brought out the final caution.

Bobby Pierce earned the pole position for his second consecutive Summer Nationals event. He never led a lap in Tuesday’s feature at Plymouth (Ind.) Speedway, however, and finished sixth. … Outside polesitter Brian Shirley will look to win Spoon River’s Hell Tour event for the second straight year. He was dominant in his heat, winning by a full straightaway. … Dropping in for a Summer Nationals appearance with Allen Murray’s machine before running this weekend’s Lucas Oil Series events at Tri-City Speedway in Granite City, Ill., and Lucas Oil Speedway in Wheatland, Mo., Rick Eckert starts 13th in his first Spoon River start since he finished ninth in the 2014 Hell Tour event driving the Rocket Chassis house car. … Frank Heckenast Jr. missed transferring by one spot in his heat after opening-lap contact between him and Stormy Scott sent him out of shape on the backstretch. He starts 19th after finishing third in the consolation. … Ryan Unzicker retired on lap two of the third heat when his car began sputtering terribly because its distributor disintegrated. He didn’t transfer in the consolation but starts the feature thanks to a provisional spot.

Kyle Bronson of Brandon, Fla., registered the fastest overall lap in qualifying, circling the third-mile track in 13.0759 seconds in the second time-trial group. He will start from the pole in the third of four heat races.

Daryn Klein of Fairview Heights, Ill., was the slowest qualifier in the first group after losing the left-front wheel of his Gerstner Motorsports No. 6. He limped into the pit area after tossing the wheel.

The DIRTcar Summer Nationals visits Spoon River Speedway on Thursday night for the fifth event of the 2020 series. It’s the 25th time the Hell Tour has run at the high-banked, third-mile oval.

A different driver has visited victory lane in each of the last seven Summer Nationals features contested at Spoon River dating back 2012. Four of those winners — Brian Shirley (2019), Shannon Babb (’18), Bobby Pierce (’17) and Jason Feger (’14) — and in tonight’s field. Ryan Unzicker, who captured the track’s Hell Tour stop in 2010, also is entered.