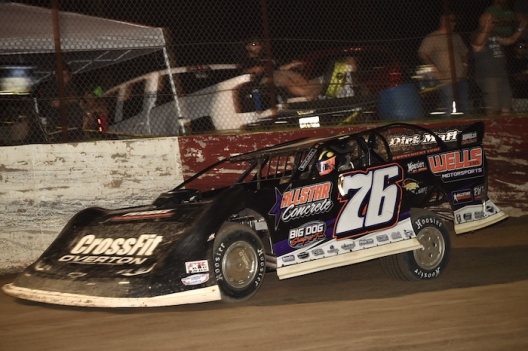 Overton, the defending series champion from Evans, Ga., kicked off the tour’s four-race swing through his home state with a $3,500 victory Thursday at Senoia Raceway. The pole-starting Overton overook fellow front-row starter Chris Madden of Gray Court, S.C., with five laps remaining in the 35-lapper and pulled away to his second victory on this year’s tour.

Overton took the checkers 1.130 seconds ahead of Madden, who he trailed by 10 points at the top of the series standings entering Thursday’s race. Madden settled for second after leading the race’s first 30 laps. Ninth-starting Steven Roberts of Sylvester, Ga., finished third with 10th-starting Michael Page of Douglasville, Ga., fourth and 14th-starting Joseph Joiner of Milton, Fla., fifth.

Like many drivers, Overton had trouble navigating a tricky track surface early in the race. The typically smooth and slick Senoia surface had more character than usual, producing higher speeds and making it difficult for drivers to make consistent laps.

After slipping back to third behind Madden and fourth-starting Mark Whitener of Middleburg, Fla., early in the race, Overton found his groove just after the 10-lap mark and went to work chasing down the top two. He cleared Whitener for second on lap 13 and tracked Madden through a series of restarts before making the winning move when Madden had trouble getting through turns three and four on lap 31.

“That right there was fun,” said Overton, who lowered the track record during time trials with his 12.683-second lap. “Once I got by Mark for second, I was just trying to ride and figure out where I could make time on Chris and was waiting until we got to some traffic to make a move.

“The track was way different than what it usually is. It was really patchy. I was so tight getting in the corner that if I drove in straight I would shove, shove, shove. But if I really turned it sideways, I’d slide all the way to the corner. But hell, it was fun.”

Overton hopes his victory at Senoia will prove to be a turning point in the chase for the series title. While he’s finished no worse than fourth in the tour’s first five races and won the tour’s visit to Wythe Raceway in Rural Retreat, Va., Overton had finished behind Madden in three of the tour’s first four races going into Thursday.

As the tour heads farther south into his home region for events at Needmore Speedway in Norman Park, Ga., Screven Motor Speedway in Sylvania, Ga., and Cochran (Ga.) Motor Speedway over the next three days, Overton is optimistic that he has the upperhand on his tour rival.

“We’ve pretty much been at every track he’s really, really good at except for maybe I-75,” Overton said. “Now we’re down here at these tracks that I’ve made a lot of laps at. I’ve grown up racing at these tracks and just feel like I’m more at home at them. If nothing else, I just really enjoy going to them.”

“I made a mistake there and it cost me,” Madden said of his lap-31 bobble that allowed Overton to slide ahead for the lead. “If I make the corner there like I should have, I don’t think he was going to drive by me without that. But he drove a good race and was there to take advantage. It was a fun race.”

The race saw a number of frontrunners fall by the wayside. Madden’s Millwood Motorsports teammate Tyler Millwood of Kingston, Ga., ran as high as fourth early in the race, but suspension issues caused him to fade and eventually drop out of the race. A flat left-rear tire caused Ross Bailes of Clover, S.C., to slow from a top-five spot on lap 27. And Whitener saw his chance for a podium finish slip away when he tangled with Roberts on the final lap.

The race was plagued by cautions in the early going. The first came with one lap complete when Pearson Lee Williams of Dublin, Ga., and Donald McIntosh of Dawsonville, Ga., tangled in turn four. Jake Knowles of Rome, Ga., made an early exit after getting into the turn-one wall on lap three, and Brian Nuttall Jr. of Claxton, Ga., spun a lap later to cause another early caution.

Dalton Polston of Douglasville, Ga., climbed the wall at the center of turns one and two, causing a lap-eight caution. The leaders were sent scrambling on lap 16 when Ryan Crane of Panama City, Fla., tagged the wall exiting turn two and came to a stop just in front of Madden. Everyone escaped unscathed other than Crane’s machine.

The tour continues its Georgia swing Friday at Needmore Speedway in Norman Park, Ga., for round six of the 12-race tour. The $10,053-to-win event marks the tour’s first visit to the south Georgia track.

Brandon Overton hammered his way around Senoia Raceway's 3/8-mile oval during Thursday's Schaffer's Southern Nationals time trials, posting a lap of 12.684 seconds to top qualifying and establish a new track record at the Georgia oval. He'll start from the pole of the night's 35-lap main event. Points leader Chris Madden topped the other qualifying group to earn the outside pole.

The Schaeffer's Southern Nationals kicks off a four-race swing through the Peach State on Thursday with a visit to Senoia Raceway for round four of the 12-race summer tour. Tonight’s 35-lap main event pays $3,500 to the winner.

Thursday’s race marks the Ray Cook-promoted tour’s second visit to Senoia’s ⅜-mile oval. The tour previously visited the Atlanta-area track in 2017 for another Thursday night event that drew 37 entries and was won by Donald McIntosh of Dawsonville, Ga. Another visit to the track was planned in 2019 but was rained out.

After four events, five-time series champion Chris Madden of Gray Court, S.C., leads the series standings on the strength of two victories. He leads defending champion Brandon Overton of Evans, Ga., by 10 points. Overton has one win on the this year’s tour, and third-place point man Cory Hedgecock of Loudon, Tenn., has also won a race.

Originally built in the 70s as a high-banked red-clay track, Senoia operated as a dirt track through the 80s. The track was eventually paved for a number of years of asphalt racing before returning to its dirt track roots in 2010 with a surface material more akin to gumbo dirt than the red clay typically found at Georgia dirt tracks.