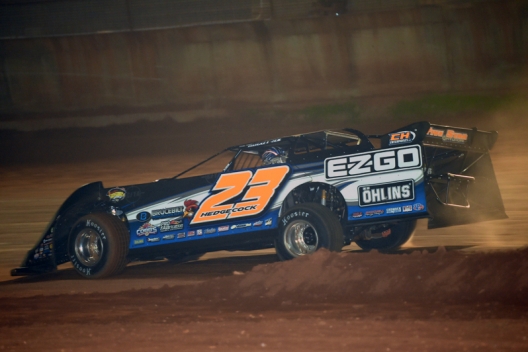 SWEETWATER, Tenn. — After a pair of third-place finishes — and a sure top-five that he lost due to suspension failure — Cory Hedgecock knew his time would come on the Schaeffer’s Southern Nationals Series. He even had a pretty good suspicion of where he might pick up his first series win of the season.

“We’ll go to I-75 where I know we’re good. … I’d say we got more laps than anybody down there, so hopefully we’ll be able to capitalize on that and show how much speed we got,” Hedgecock said after Monday’s series race at Volunteer Speedway. Talk about calling your shot. Hedgecock was dead on.

Taking advantage of his wealth of experience at I-75 Raceway, Hedgecock, of Loudon, Tenn., did in fact win Tuesday’s Schaeffer’s Southern Nationals main event at the tricky 1/4-mile oval. He took the lead from polesitter Ross Bailes of Clover, S.C., on lap nine and then made sure he kept Chris Madden of Gray Court, S.C., in check following a couple of late restarts as he raced to a $3,500 payday and his second career Southern Nationals victory.

Madden settled for second after starting sixth — his worst starting position in the four events this season — and seventh-starting Brandon Overton of Evans, Ga., finished third after riding in the runner-up spot for nearly 20 laps. Donald McIntosh of Dawsonville, Ga., marched forward from 12th to finish fourth and third-starting Ryan King of Seymour, Tenn., completed the top five.

Hedgecock started second and fell in behind Bailes at the start of the 35-lapper, which took three tries to get going. Bailes, making his first start at I-75, did all he could to protect the bottom groove, but while catching the slower traffic, he slipped slightly in turn four and Hedgecock was there to pounce, squeezing to the inside of him on lap eight, while leaving Bailes little choice but to relent the position.

A lap later, with Hedgecock looking for a way around the slower car of Cleveland, Tenn.’s Craig Greer, Bailes and Hedgecock made contact in turn four with both of the front two cars sliding out of shape. Both managed to make saves with Hedgecock darting away and moving around the outside of Greer.

It wasn’t the last time Hedgecock averted disaster, nor was it the last time there was contact between two front-running cars. After a caution on lap nine, Overton restarted seventh and mounted a stirring rally around the high side, climbing all the way to the runner-up spot.

Over the next 18 laps, with Hedgecock working to the outside of heavy lapped traffic, Overton ran down the leader, but just as he stuck the nose of his Wells & Sons Motorsports Longhorn alongside Hedgecock’s left quarterpanel, Hedgecock had to take evasive action to avoid a slowing car exiting turn two. When he swerved left, he caught the nose of Overton’s car, damaging the right front flopper.

“I want to really apologize to Brandon,” Hedgecock said in victory lane. “I didn’t know he was that close and I was trying to get around that lap car and I’m sure I pinched him and apparently I tore him up. You know I’m sorry to him.”

After the contact, Overton struggled. With his car’s handling fading, Overton managed to keep Madden at bay for a couple of laps, but he was unable to hold him off following a restart on lap 28.

After restarts on both lap 27 and lap 28 and with Overton no longer a threat, Hedgecock appeared to have clear sailing, but yet another caution — the fourth of the race, not counting the three attempts on the initial start — appeared on lap 34, forcing Hedgecock to defend Madden one last time.

Hedgecock was glad to finally see the checkered flag.

“I mean, top three last night (at Volunteer Speedway) and top three again tonight, with the same guys and everything, just a little bit of a different order,” Hedgecock said. “Running in front of these two guys, man I’m tickled to death. We’ve got this thing rolling.

“Man, I was just trying … we’ve made a lot of laps here, so I mean nine times out of 10 it’s protect the bottom and you can prevail. Man, I’m happy.”

Madden, who has yet to finish worse than second in the four series events since joining Millwood Motorsports, won a race at I-75 in 2004 when the track was called Murphy Speedway and was then a gargantuan 5/8-mile oval. He admitted that the revamped layout, which is a far cry from the original superspeedway-esk track, isn’t necessarily his forte. He was also quick to thank Hedgecock for pointing him in the right direction earlier in the day.

“These small bullrings is just not me, but we managed to get it to where it was pretty good tonight in the feature and we managed to get a second-place finish,” Madden said. “We were really at the end of the race running pretty good there, but congratulations to Cory and them. He helped me with a little tire choice tonight … thanks to him for the help tonight and congratulations to Brandon and them.”

Notes: Hedgecock’s previous Schaeffer’s Southern Nationals win was on July 17, 2018 at 411 Motor Speedway in Seymour, Tenn. … Sixteen cars finished, 13 completing 35 laps. … Ross Bailes finished 12th after leading seven laps. … David Payne of Murphy, N.C., who started 13th, spun on the opening lap after contact from behind and never completed a lap. … Overton said he expects the series points race to go down to the wire. “It’s gonna be a dogfight for sure,” he said “There’s a lot of good cars (following the series). I think people underestimate the cars in the South. They’re just as good as any of them. Just glad to be a part of it.” … The series takes Wednesday off before heading to Senoia (Ga.) Raceway on Thursday.

That's lighting, not lightning. At approximately 9:50 p.m. — midway through the sportsman feature — power went out at the facility, leaving the track and pit area dark. Crews were working on the problem and officials announced there would be delay of about 20 minutes.

Feature polesitter Ross Bailes of Clover, S.C., will start from the front row for the third time this season. … John Ownbey of Cleveland, Tenn., spun in turn two on the opening lap of the first consolation and had to tag the rear because it was a solo spin. He spun again on lap four, but rallied back to fourth to transfer into the feature. … Georgian’s Jake Knowles and Donald McIntosh grabbed wins in the consolation races. … Nine drivers have perfect attendance through four series events: Chris Madden, Brandon Overton, Bailes, Cory Hedgecock, McIntosh, Tyler Millwood, Knowles, Pearson Lee Williams and Ryan Crane.  … Six of those nine have at least one career Southern Nationals victory. Madden’s series-best 26 lead the way, followed by Overton (14), McIntosh (4) and Hedgecock, Bailes and Knowles with one each. … Ahnna Parkhurst of Evans, Ga., has her Bloomquist Race Car repaired following Monday’s incident at Volunteer Speedway. Parkhurst broke a left front spindle during hot laps at Bulls Gap and had to scratch for the rest of the program. … Neither Mark Whitener of Middleburg, Fla., nor John Baker of Norman Park, Ga., are in attendance at I-75. Whitener, who had engine issues in the series opener at Smoky Mountain was expected to pick up the powerplant from Vic Hill on Tuesday. … Seven drivers — Ruben Mayfield, Colton Profit, Kyle Courtney, Ownbey, Gary McPherson, Cody Overton and Tim Rucker — are making their 2020 Southern Nationals debut on Tuesday.

Cory Hedgecock of Loudon, Tenn., the last car among 25 to take time trials, was the fastest of them all. Hedgecock wasn’t close to his I-75 track record of 11.761 seconds set on Nov. 24, 2019, but he was plenty fast enough to set the overall fast time Tuesday and earn an outside front row starting spot for the 35-lap main event. Hedgecock stopped the clock at 12.221 seconds, while Ross Bailes of Clover, S.C., who went out second in Group A, turned in a mark of 12.348 seconds, quickest in the group, and will start the feature from the pole position. The top five drivers in each group are locked in the feature, with the rest left to run a pair of last chance races to set the remainder of the feature lineup.

The Schaeffer’s Southern Nationals Series is trending South — through Tennessee that is. After Monday’s early night at Volunteer Speedway in Bulls Gap, Tenn., where five-time series champion Chris Madden picked up his second series victory of the season, the tour moves 105 miles southwest to I-75 Raceway, a 1/4-mile bullring located just of the interstate in Niota, a community of 725 residents near Sweetwater.

Sweetwater, situated between Knoxville and Chattanooga, is best known for Craighead Caverns, a cave system that is home to The Lost Sea, the largest underground lake in the United States. Before touring The Lost Sea, however, drivers will have to contend with I-75 Raceway’s tricky oval, which rests inside an original 5/8-mile speedway formerly known as Murphy Speedway.

Madden, who has not seen I-75’s new configuration, won a Southern All Stars race at Murphy Speedway in 2004. Cory Hedgecock of Loudon, Tenn., is very familiar with I-75, however, as he won a pair of Topless Outlaws Series events there in 2019, as well as a UCRA Crate race.