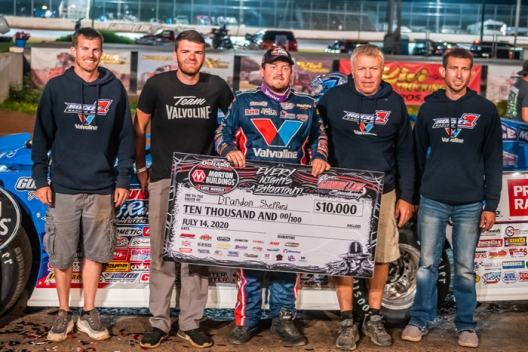 The WoO points leader from New Berlin, Ill., again left only scraps for the rest of the field as he led all 50 laps on the super-slick 3/8-mile oval at the Head of the Lakes Fairgrounds, earning $10,000 for his series-leading ninth series victory of the season and 64th of his career.

“It’s so much fun to drive right now,” the Rocket Chassis house car driver said, “and we’ve got a pretty good roll going here, so hopefully we can keep it going for a few weeks to come and get one of those big ones coming up.”

Dillard second-place finish came ahead of Jimmy Owens of Newport, Tenn., the Lucas Oil Late Model Dirt Series points leader who made the haul from a Monday race in Iowa to run third. Darrell Lanigan of Union, Ky., was fourth and 11th-starting Ashton Winger of Hampton, Ga., rounded out the top five finishers.

Sheppard faced the challenge of the slick conditions with his car sometimes nearly scraping the outside wall exiting turn four while alternately driving into the low groove and sliding across the middle when necessary.

“That's definitely the slickest track I’ve been on in a long time,” Sheppard said. “I’m used to having a little bit of cushion to lean on, or a little bit of bottom to get a hold of, but we were able to run top, middle, bottom, wherever we needed to (be) through lapped traffic, and do what we needed to do to win that race.

“It was a fun place. I was a little worried that it wasn’t going to be very racy at the beginning of the night with how dry it was, but it turned out really good.”

Sheppard will gun for his fifth straight WoO victory Friday at River Cities Speedway in Grand Forks, N.D. — he had a pair of five-race winning streaks last season — and thanked his crew for putting “in a lot of hard hours on this thing to make sure it stays up front, of course. … It’s been a fun year, you know. I’m just glad that we’re kind of getting back rolling and getting some consecutive (wins) going.”

Dillard started fourth and slipped back to sixth early in the race, but he rallied back to his ninth top-five finish on the series thanks in part to a dazzling fifth-to-second move after a mid-race restart.

Sheppard led by more than three seconds when Dillard was giving chase, but the runner-up never got closer than his final losing margin.

“(Sheppard) probably got a little conservative out there while he was leading, so he probably picked it up a little bit,” Dillard said. “I felt like I got a lot better at the end. At the beginning, I just didn’t get going very good and fell back a couple of spots. I struggled to get back around those guys and once I did, I felt like we were pretty good out in the open and kind of ran to (Sheppard) a little in lapped traffic.

“But he was very good. It’d have taken a mistake to get around him, regardless. Congrats (to) Brandon and that crew. They’re really good right now, so second behind them is definitely nothing I’d be upset about.

“It’s pretty rewarding to be up here on the front straightaway consistently now.”

Owens, who finished second a night earlier in Lucas Oil Series action at 300 Raceway in Farley, Iowa, made a six-hour haul north to compete with the sport’s other national tour and landed on the podium.

“It was definitely worth the trip coming up here,” Owens said. “We’ve got a few kinks to work out of the car. This droop-rule deal, we don’t get to run it a whole lot, and we just made some swings at it, because it didn’t feel like it was that great in the heat race. But we got this Ramirez Motorsports Rocket rolling pretty good there at the end.

“We had a good little spurt right there for a little bit (mid-race), but we chunked the right-rear tire out there toward the end. Not making excuses, but, we had a good car and glad to come home with a good third-place finish."

Two mid-race cautions slowed the action in the 50-lapper. Aaron Lillo slowed to draw the race’s first caution on lap 23 and Boom Briggs spun in turn one a lap later.

Notes: Sheppard will try to match his career-best five-race winning streak on Friday. … Runner-up Cade Dillard appreciated the smooth, slick racing surface. “This place is awesome,” he said. “I don’t know who works this, but I dream of tracks like this all the time.” … Bonus money was doled out to the top non-WoO driver with Chad Mahder of Eau Claire, Wis., pocketing it with his sixth-place finish. … First-time WoO heat race winners and Wisconsin drivers Kevin Eder and Mike Prochnow both ran in the top three the first half of the race, but slipped back to finish eighth (Eder) and ninth (Prochnow). … Prochnow was the previous week’s WISSOTA Late Model feature winner at Superior.