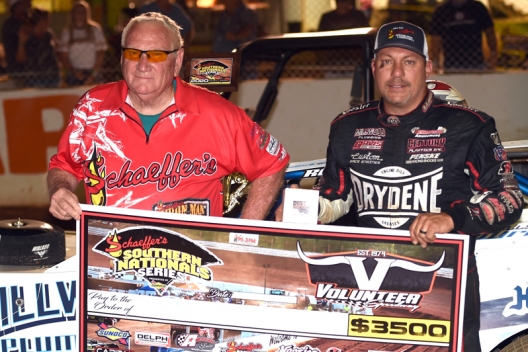 BULLS GAP, Tenn. — Chris Madden got off to a hot start in his debut with Millwood Motorsports, the Schaeffer’s Southern Nationals Series opener Friday at Smoky Mountain Speedway. A day off did little to cool him down. Madden, of Gray Court, S.C., won his second race in three starts on the Ray Cook-promoted minitour, leading the final 29 laps Monday at Volunteer Speedway for a $3,500 triumph.

Madden slipped around early pacesetter Vic Hill of Mosheim, Tenn., on lap seven and pulled away. He finished 2.379 seconds ahead of Brandon Overton of Evans, Ga., who came out on top of a late-race duel with Cory Hedgecock of Loudon, Tenn., to claim the runner-up spot. Hedgecock, who started fifth, stayed glued to Overton’s rear deck and finished third, while sixth-starting Ross Bailes of Clover, S.C., improved one position to fourth. Logan Roberson of Waynesboro, Va., started fourth, lost a few spots early and rallied back to fifth, getting around Hill, who started alongside Madden on the front row, on the final circuit.

Hill, who won the previous Southern Nationals event held at Volunteer Speedway in 2013 and whose Vic Hill Racing Engines operation is just 4 miles from the speedway, wrestled the lead away from Madden on the opening lap and appeared poised to claim a hometown victory. But after Hill broke Madden’s momentum getting into turn one on the second lap, forcing the five-time series champion up the track as they rounded turn two, Madden quickly responded.

“He shut down real hard. He’d run kinda the middle the lap before and then he shut down and went in the bottom so I had to turn and go across the back of him and just go across the middle of the racetrack and keep from getting into him,” Madden said. “Actually when I done that I was really surprised how good I was. Then I knew I could maneuver really well. It was just a matter of time then.”

With Hill opting to run the middle, Madden stayed on the top, which turned out to be the fastest way around the 4/10-mile oval.

“The line I was running (near the top of the track) is where the speed was, but I could run anywhere I wanted to,” Madden said. “I think (Hill) had a little different tire combination and it was a little quicker for a couple of laps.”

It didn’t take Madden long to reach the back of the 23-car field. By lap 10 back markers were in sight and by lap 12 he was in thick of slower traffic. Though he enjoyed a two-second advantage over Overton, who moved into second on lap 12, Madden said he had to be aggressive as he picked his way through the back of the pack.

“A 35-lap race you can’t be patient, you gotta go,” Madden said. “It’s a short race. Brandon (Overton), he’s extremely good right now and I know he ain’t holding back, so I wanna go, that way when I catch lap traffic I can kinda judge it and maneuver it the way I need to so I don’t make the wrong decision and give the race away. It’s a short race so you just go and go as hard as you can every lap.”

Madden pulled away from Overton until a lap-21 caution slowed the pace. On the restart, Overton chose the bottom, leaving the top open for third-running Hedgecock, who took advantage and powered around Overton and into second on lap 22. Hedgecock briefly put a gap between himself and Overton, but Overton rallied back and for three laps the two fired sliders at each other with both drivers criss-crossing their way around the other. Overton finally reclaimed second for good on lap 30, but Hedgecock stayed in his tracks to the finish.

“It was fun,” Hedgecock said. “We can race that many laps and that many sliders and everything and nobody hit nobody and it’s all in good fun at that point. I think me and him probably had some decent cars if we would just probably quit fooling around with each other we probably could’ve maybe ran Madden down a little bit. But Madden is definitely fast … definitely clicking off some, so hats off to them.

“I didn’t qualify as good as I wanted to, but I’m still behind two of the best in the country so we’ll take it.”

Overton, who won Saturday at Wythe Raceway in Rural Retreat, Va., was happy to leave Bulls Gaps with second place.

“I suck here, so I’ll take my second and go on to tomorrow (at I-75 Raceway),” Overton said. “We didn’t tear anything up. It was fun racing against Cory. We slid each other a couple times but never touched so that’s always good. I’d just like to thank all my sponsors and everybody for helping me get here and we’ll keep on plugging along.”

Notes: It was Madden’s series-leading 26th career Southern Nationals victory but first at Volunteer Speedway. He finished second to Hill there on July 16, 2013. … Seventeen of the 23 starters finished the race with 14 completing 35 laps. … Madden, who has two victories and a second since climbing aboard the Millwood Motorsports Rocket XR1 said he getting used to his new ride. “It’s definitely a little different there … a learning curve for me, but we seem to be catching on pretty quick,” said Madden in his victory lane interview. … The lone caution was for Pearson Lee Williams, who slowed with a flat tire.

Polesitter Chris Madden of Gray Court, S.C., will start on the front row of the main event for the second straight race, while tonight’s feature marks the first time that Ross Bailes of Clover, S.C., will not start the main event from the first row. … Mark Whitener is sitting out Monday’s race while turning wrenches on John Baker’s Barry Wright Race Cars ICON chassis. Whitener drove Baker’s car to a seventh-place finish Saturday at Wythe while the team assessed a problem with Whitener’s engine, which Baker is supplying for the Middleburg, Fla., driver for the duration of the series. Whitener tore the motor down Monday and is planning to pick up the powerplant from engine builder Vic Hill on Tuesday or Wednesday. He said he may drive Baker’s car again Tuesday. … Decherd, Tenn.'s, Jadon Frame is back with the series after skipping Saturday’s event at Wythe Raceway. Frame and car owner Joe Denby of Tullahoma, Tenn., left Smoky Mountain and made the 245-mile haul to ECM Speedway in Bremen, Ala., for Saturday’s Southern All Stars race, where they finished third and 11th, respectively. Denby is expected to rejoin the team Tuesday at I-75 Speedway. … Georgia’s Ahnna Parkhurst joined the series for the first time this season, but a broken left front spindle in hot laps sidelined her effort. Parkhurst, who has Shane McDowell helping her during the midweek events, plans to rejoin the series Tuesday at I-75 and run three or four more shows. … Logan Roberson of Waynesboro, Va., has joined the series also. … David Payne of Murphy, N.C., was a late arrival. Payne is back on the tour after flipping his brand new Capital Race Car at Smoky Mountain. … Payne, Frame, Baker, Ryan King, Dusty Carver and Craig Greer are back after skipping Wythe. … Whitener, Chris Ferguson, Trent Ivey and Kyle Hardy are among drivers who competed in the first two events but are not racing at Bulls Gap. … Donald McIntosh and Greer will take series provisionals. McIntosh led eight laps of his consolation race before stopping to draw a caution because of a flat tire.

Chris Madden of Gray Court, S.C., was the overall fast qualifier, turning a lap of 13.488 seconds. Madden, who went out second in Group A, earned the pole for Monday’s 35-lap feature. Vic Hill of Mosheim, Tenn., was the quickest in Group B and will start the main event from outside the front row. The top five drivers from each group are locked into the feature. From Group A, Brandon Overton, Cory Hedgecock, Jenson Ford and Ryan King are locked in, while those advancing straight to the feature from Group B include Hill, Logan Roberson, Ross Bailes, Tyler Millwood and Clay Coghlan.

After Sunday’s scheduled day off, the Schaeffer’s Southern Nationals returns to Tennessee for Monday’s race at Volunteer Speedway in Bulls Gap. It’s the ninth visit to Volunteer, but the first since 2013, when Vic Hill of Mosheim, Tenn., picked up the win. The 4/10-mile oval hosted the series for eight consecutive seasons from 2006-’13.

Chris Madden of Gray Court, S.C., leads the series back to Bulls Gap. The five-time series champion has a scant four-point lead in the tour standings over reigning series champ Brandon Overton of Evans, Ga. Madden and Overton split victories in the first two races, with Madden winning at Smoky Mountain Speedway and Overton winning at Wythe Raceway.