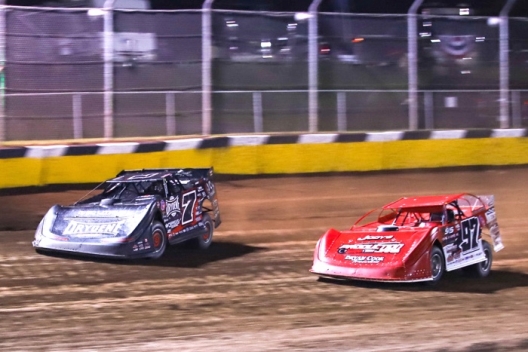 NEW RICHMOND, WIS. (July 2) — Ricky Weiss beat Cade Dillard to the finish line by a mere 0.172 of a second in the Elimination Showdown that capped Thursday’s World of Outlaws Morton Buildings Late Model Series qualifying program at Cedar Lake Speedway. Then the 31-year-old Canadian climbed on the roof of his car and celebrated what appeared to be a $3,000 victory.

But the driver from Headingley, Manitoba, didn’t keep the checkered flag. His Bloomquist Race Car failed a postrace deck-height inspection because of a problem with its droop limiter, penalizing him three positions to a fourth-place finish and handing the top prize to Robeline, La.’s Dillard.

The unique race wasn’t a WoO points event nor a full-fledged series feature. The top 16 drivers from Friday’s qualifying round (with the top 12 cars inverted) advanced to the 20-car Elimination Showdown, with a 10-lap consolation race determining the remaining four cars; then the last four cars in the running order after each of three 5-lap segments were eliminated, leaving eight competitors for the final 8-lap dash to the $3,000 winner’s check.

But the novelty nature of the affair didn’t remove the sting of crushing penalty for Weiss, who turned back Dillard’s furious, final-lap inside bid through turns three and four to register what seemed to be an uplifting, weekend-starting triumph. The reason he failed post-race tech was a small rubber in his car’s droop limiter.

“We’re running around there, these things are yanking off this (droop limiter) chain that they figure makes the cars safer,” Weiss said in a post-race interview with DirtonDirt.com’s Derek Kessinger. “I mean, we broke a 15-cent rubber with a $100,000 race car.

“It is what it is,” he continued while holding the rubber from his car’s droop limiter. “I just don’t understand why we’ve got to have a rule where you depend on something so cheap that you can’t maintain something … I’m just glad that it happened for 3-grand and not a 100-grand or something.”

According to WoO Late Model Series technical director Kenny Kenneda, the rear deck height of Weiss’s car did indeed surpass the maximum allowance after the race because of the broken rubber on the droop limiter.

“We checked the droop rule at the end of the feature and he was about an inch-and-a-half, inch-and-three-quarters high (resulting in a three-position penalty),” Kenneda told Kessinger. “We tore the droop limiter apart and it had a broken biscuit (in it). That’s only the second one I’ve seen all year break, so we’ll just go on, move on to the next day. Just trying to police the rule. I can’t be responsible for the parts that they use.

“It’s only happened one other time — it happened in Florida (during February’s DIRTcar Nationals at Volusia Speedway Park) and they changed the product that they used. These guys want to buy these rubbers … and I’m not saying that Ricky’s done this by any means, but the rumors are these guys are buying this stuff and they’re putting softener and stuff on trying to soften ‘em up and gain that spoiler height and it’s tearing the rubbers up.

“I’m a hundred percent sure that’s probably not what he done, but a rule’s a rule,” he added. “It’s no different if he was out there racing and a piece of lead fell off his car and he’s light at the scales. How’s that my fault?”

WoO Late Model Series director Casey Shuman was saddened to hand down Weiss’s penalty but had no other choice.

“Cade and Ricky put on a great race,” Shuman said in an interview with Kessinger. “No matter what anyone thinks, I don’t ever want to do that to a guy. I hated it in Florida (when Dennis Erb Jr. was DQ’d from a Volusia victory for failing to report to post-race tech) and hate what we’re doing tonight, but I want to be black-and-white and enforce the rules the same with everybody at every race and that’s what we did.

“I’m glad, in a way, that it happened tonight. There was no points implications. It wasn’t $20,000 (the winner’s payout on Friday and Saturday). And now they’re gonna put the right stuff on (the droop limiter) that should be good this weekend. I hope he goes out and wins 20-grand and we don’t have anymore issues. This was the night to do it where it doesn’t cost much.”

Both Shuman and Kenneda remained solidly behind the WoO tour’s droop rule, which was instituted after January’s season-opening weekend in New Mexico.

“It’s peaks and valleys, but we’re all learning it together,” Kenneda said. “And I still 110 percent think it’s the best thing that I’ve done. It seems to make the racing better. Maybe it’s just me because it’s something I spent a year-and-a-half measuring and doing.”

“Honestly, I feel like it’s gone really well,” offered Shuman. “Everyone has adapted way quicker. We’ve seen two of (the droop limiters) break, and one was in Florida earlier in the year and it was a very soft material, and then we saw tonight. I feel like out of all the cars we’ve checked all year long, the percentages are on our side. I think it’s working. I think it’s evened the racing out.

“But yeah, I hate it. I hate it for Ricky. I like all of our guys, so if it happens to anybody, it’s not fun. But it is what it is. It’ll be the same tomorrow night if it was someone else.”

Weiss certainly didn’t sound like a fan of the droop rule after his DQ.

“No, I don’t think anybody really likes the rule,” said Weiss, whose penalty left him with a $1,000 payoff for finishing fourth in the Showdown. “I don’t understand it. When we go run with the Lucas Oil Late Models you gotta change it back and it changes the cars. They don’t seem to be having an issue.

“We’re happy with the changes we made on the car,” he continued. “It was definitely better. I think we got a good piece for tomorrow as long as we can get the (droop limiter) rubber to stay in it. There’s not much else we can do other than put a new rubber in and cross our fingers every time we go through tech now.”

The 29-year-old Dillard, meanwhile, ended up extending the hot streak he brought to Cedar Lake after scoring a $30,000 victory in last Saturday night’s Firecracker 100 finale at Lernerville Speedway in Sarver, Pa.— even though his last-lap challenge to Weiss had fallen short.

“I think I just got too comfortable on the bottom, was driving too straight trying to protect that down there,” Dillard said when asked how Weiss had overtaken him for the lead on lap two of the third 5-lap segment. “Once he went by I got a lot more aggressive. I felt like the car was a lot better once I done that.

“I seen him move down there on the last lap to protect that bottom, so I knew if I hit (turns) one and two pretty good we’d have a good run at it. I was gonna roll around the top and then he floated out to the wall there (off turn two)… it was almost too late to try and cross him over and it kind of killed my momentum to be able to drive up under him, but we got up beside him (in three and four). We probably could’ve won it and took both of us, but I’m just not that way so we just settled for second.

“We got a real good hot rod right now,” he added. “We’re just gonna try to keep this momentum going.”

Sheppard’s Rocket Chassis house car team switched to their second car between qualifying sessions after mechanical trouble was discovered in the machine Sheppard ran in the first round of time trials.

Both the Friday and Saturday cards at Cedar Lake include heats, a consolation and a 50-lap feature paying $20,000 to win. The WoO sprint cars also run a full program topped by $20,000-to-win features both nights.