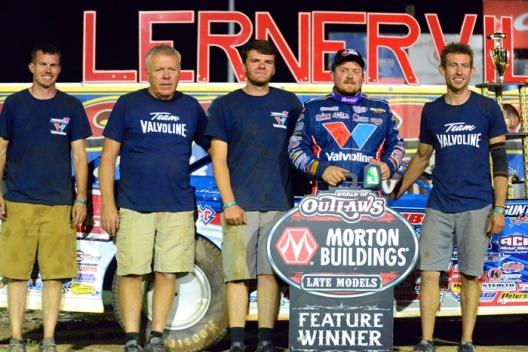 SARVER, Pa. — Brandon Sheppard has held the lead on the last lap of both Firecracker 100 prelims at Lernerville Speedway. But Friday’s finish turned way better than Thursday’s.

Rebounding from being turned around on the last lap of Thursday’s opening 25-lapper, Sheppard on Friday cruised to a $6,000 World of Outlaws Morton Buildings Late Model Series victory to put memory of spin-causing contact from Thursday winner Max Blair behind him.

The pole-starting Sheppard notched his fifth WoO victory of the season and 60th of his career in taking the checkers 1.458 seconds ahead of hometown driver Michael Norris while three-time Firecracker winner Scott Bloomquist of Mooresburg, Tenn., was third in the non-stop 25-lapper. Thursday runner-up Cade Dillard of Robeline, La., was fourth with outside front-row starter Boom Briggs of Bear Lake, Pa., rounding out the top five.

Blair, the Centerville, Pa., driver who captured Friday’s opener settled for a 19th-place finish in the second prelim heading to Saturday’s $30,000-to-win finale.

Sheppard, who steers the potent Rocket Chassis house car, hopes to be in contention when the big money is on the line after running on a high-speed track Thursday and a super-slick surface Friday.

“Hopefully the track’s a little more in between the way it was last night and the way it was tonight. I’d like to see it a little bit faster,” said the New Berlin, Ill., and two-time WoO champion. “It was probably kind of hard to pass there tonight. I would’ve hated to started back in the pack tonight; I feel like it would’ve been hard to pass. Once I got to the lapped cars there, I wasn’t quite as good as I wanted to be. In the dirty air there, it’s hard to keep going, and luckily we were able to hold off, I think it was Norris, behind me.

“We had a really good car though, definitely can’t complain. We’re going to work on it a little bit for tomorrow and see what they give us for a racetrack.”

Norris, who was running third in Friday’s prelim when he slipped over the turn-two banking and fell from contention, took second from Bloomquist on the 16th lap and cut into Sheppard’s two-second lead but ended up 1.458 seconds behind at the checkers.

“Definitely a little bit of redemption,” Norris said. “I messed the car up last night. I was just driving it a little too hard, still to come out with a 10th, we were happy with that. It’s crazy to think when we started (racing) we just wanted to make these (WoO features), and now we’re disappointed with a top-10.

“But tonight felt really good. I mean, we’re in pretty good company here, so I think we might have something for tomorrow. We’ll see what the weather brings and go from there.”

Bloomquist, who matched Dillard with his second straight top-five run, said he wouldn’t likely be second-guessing Saturday’s choice if conditions are what he expects.

“Last night, we put a hard tire on and it was just the wrong thing to do,” he said. “And tonight we ran soft tires and the hard tires were better, but at least we know what we’re getting into for tomorrow and hopefully the weather will be good and we’ll get up front tomorrow.”

Friday brought partly cloudy skies and temperatures in the lower 80s, but the chance of thunderstorms rises as midnight approaches. … Friday’s program started on schedule with hot laps at 6:05 p.m. … A 47-car field signed in for the second preliminary program; Drake Troutman and Gary Lyle did not return after experiencing problems on Thursday while Kelvin Kohan joined the competition. … Jared Miley of Pittsburgh, Pa., is back with his older 2017-model XR1 Rocket car after scratching from Thursday’s racing due to a broken oil pump that sidelined his new machine as he ran in a heat-race transfer spot. … Friday’s fast-timer Brandon Sheppard of New Berlin, Ill., made an engine swap in his Rocket Chassis house car following Thursday’s action. … After a camshaft problem during the pace laps for Thursday’s feature prevented Will Thomas of Sharpsville, Pa., from starting his first-ever WoO A-main, he’s back in action tonight but turned a subpar qualifying lap. …Ricky Weiss of Headingley, Manitoba, was hoping for a smooth night after hauler trouble en route to Lernerville delayed his arrival to minutes before the start of Thursday's feature, but the black cloud remained over him as his car was felled by a broken engine during hot laps. He scrambled with crewman Jason Palubicki to unload his backup in time to make his spot in the qualifying order but logged the 13th-fastest lap in his group.