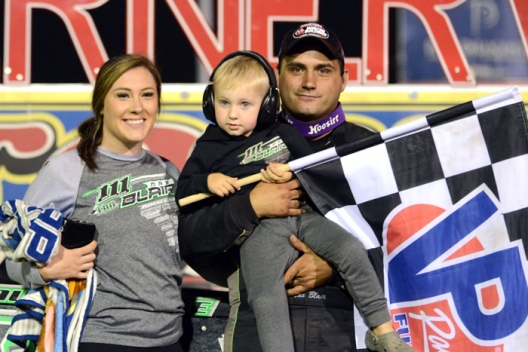 SARVER, Pa. — It’s not the way anyone wants to win on the World of Outlaws Morton Buildings Late Model Series, but Max Blair wasn’t about to turn down a home-state victory on the national tour.

So while the Centerville, Pa., driver immediately announced in victory lane his plans to apologize to Brandon Sheppard after Blair sent the series points leader spinning in turn three following a last-lap pass, he was thrilled to add a Firecracker 100 preliminary victory at Lernerville Speedway as his third WoO triumph.

“Like I said, I feel terrible about what happened going into (turn) three, but man, these races are tough to come by. Real tough,” the 30-year-old Blair said. "Trust me, I now just how tough, especially here. This one means the world to me. We’re going to celebrate a little tonight.”

After the tangle with Sheppard, Blair won a two-lap shootout to the checkers at the 4/10-mile oval by 1.184 seconds over early leader Cade Dillard of Robeline, La., and collected $6,000 in the first of three nights of Firecracker action.

Ricky Thornton Jr. of Chandler, Ariz., stormed from his 21st starting spot to finished third in the 25-lapper while three-time Firecracker winner Scott Bloomquist of Mooresburg, Tenn., and Chase Junghans of Manhattan, Kan., rounded out the top five.

The pole-starting Dillard led the first 18 laps, but the sixth-starting Blair tracked him down in traffic and took the lead on the backstretch, trying to stretch his margin as Sheppard charged into contention, taking second from Dillard on lap 22.

Blair remained in control while taking the white flag, but struggled in traffic allowed Sheppard to blow by on exiting turn two and take the lead. But as the frontrunners entered turn three and Sheppard’s left-front wheel hit the inside berm to slightly slow his momentum, the higher-running Blair’s nosepiece caught the right-rear corner of Sheppard’s car, sending him spinning as the caution, rather than the checkers appeared.

Resetting the field for the finish was mostly anticlimactic as Blair, restored to the lead, ran unchallenged to complete a 25-lapper that turned into a 26-lapper with an additional lap because of the final restart.

Sheppard, who ended up 22nd, clearly wasn’t happy with the turn of events.

"I cleared him (off turn two) and we went down into three and I was gonna roll around that bottom like I had a few laps before that,” said Sheppard, who pilots the Rocket Chassis house car owned by Mark Richards. "I don’t know what he was thinking, but he came in there hot and took me out.”

Blair, a longtime Rocket driver, hated how it all turned out.

“No. 1, next to my dad, there’s nobody in this sport that I respect more than Mark Richards and Brandon Sheppard. I hate that happened,” he said after climbing out of his car in victory lane. “I got bottled up behind them lapped cars, I didn’t now where to go. I should’ve never under them. I knew better. I should’ve just stayed to the outside them last couple of laps. I almost threw it away.

“When Brandon passed me, we got into (turn three), and he just slowed down way, way, way more than I was anticipating. I was trying to get by the lapped car and back up the racetrack to give myself a run. I definitely got into him. I feel terrible about it. I hope them guys — Mark’s a big, big, big part of my program — I hope they’re OK with everything, and I’ll talk to them and apologize. But man, this is our third (WoO victory), and I can’t believe it.”

With a $30,000 paycheck on the line in Saturday’s finale, Blair called the preliminary victory a huge confidence-booster, that’s for sure. We tried a couple of different things tonight in the feature. We drew a bad pill in the redraw, and I talked to dad, and we figured, ’What the heck,’ let’s try this stuff, it’s a good opportunity to do it. I think we were real good. I don’t know how close them guys were once I got passed (Dillard), I don’t know how close they were until we got into lapped traffic there.”

Dillard wondered after the race if he shouldn’t have been more aggressive on the high side of the track, which can be tricky in turns one and two without an outer wall.

“There at the end, I just probably got more conservative,” Dillard said. “The top was probably better in (turns) one and two, but it just got so thin, and a couple of times I kind of caught a push. I probably should’ve gave it a little more and took a chance, and I think we might would’ve stood a chance of winning it. But I probably just got too conservative. Still a good points night and there’s a lot of good cars here, so I’ll definitely take this.

“We went the right way with our adjustments, just not far enough. … We were definitely better than we were here last year, so we’re building on that, and hopefully after two more days, we’ll be able to build the notebook up a little better and just figure out what we need to get a little better. But these guys have a lot of experience here (and) this is our second time here.”

Thornton wasn’t up front long enough to make a serious bid for the lead, but he made an impressive charge, breaking into the top 10 after 13 laps and reaching the top-five near the finish.

“We kinda took our time early and kind of rode around the bottom, and just kind of let it all hang out after that and moved up,” said Thornton, a WoO winner last month at Jackson (Minn.) Motorplex. “We were really good. We restarted fifth at that fifth at that green-white-checkered (finish) … we’ll take it.”

Besides the last-lap fireworks, the only slowdown was on the third lap with a pileup inside turn one that left Dennis Erb Jr.’s car teeter-tottering on the inner berm, drawing a red flag for the cleanup. Rick Eckert’s car was hung up under Erb’s while Brent Larson, Darrell Lanigan and Mason Zeigler were among others involved in the mess.

Notes: Outside front-row starter Michael Norris ran third most of the way but slipped over the turn-two banking on the 15th lap and faded; he ended up 10th. ... Ricky Weiss of Headingley, Manitoba, second in series points, started on the tail in Colton Flinner’s No. 48 with an emergency provisional after mechanical problems with his hauler en route to the track. He arrived just before the 25-lap feature … Will Thomas of Sharpsville, Pa., was set to start 11th, but his car lost fire during pace laps with a problem the team couldn’t immediately diagnose.

The usual bane of Firecracker 100 weekend — rain — struck Lernerville Speedway last Thursday afternoon with a burst of showers, but the skies cleared before 6 p.m. and hot laps began just 1 hour behind schedule at 7:05 p.m. … Ricky Weiss of Headingley, Manitoba, who enters the weekend second in the World of Outlaws points standings, experienced mechanical trouble with his hauler near the West Virginia-Pennsylvania border and did not make it to the track in time to participate in time trials. … Gregg Satterlee of Indiana, Pa., arrived at Lernerville hot off a victory Wednesday night at Port Royal (Pa.) Speedway. … With the start of the DIRTcar Summer Nationals in his Midwest backyard pushed back until July 8, Shannon Babb of Moweaqua, Ill., made the haul to compete at Lernerville for the first time since he entered the track’s two WoO events in 2008 when he drove for Clint Bowyer Racing. He won a WoO A-main at Lernerville on April 17, 2007, but has only entered the Firecracker 100 weekend once, in ’08 when he finished third. … Ricky Thornton Jr. of Chandler, Ariz., is back in Dirt Late Model action with the SSI Motorsports team for his first-ever Lernerville start. His only previous appearance in Pennsylvania came in 2018 when he ran the Pittsburgher 100 at Pittsburgh’s Pennsylvania Motor Speedway as a substitute in the SSI seat for the sidelined Hudson O’Neal. … Bear Lake, Pa.’s racing cousins Boom Briggs and Chub Frank are both pulling double-duty this weekend, adding entries in the RUSH tour’s $10,000-to-win Crate Late Model program. “We’re getting all the laps we can,” Briggs’s crew chief Shane Winans quipped while prepping one of the four Chub Frank Racing cars parked in the pit area. “If they had 4-cylinders, we’d have run one of them too.”