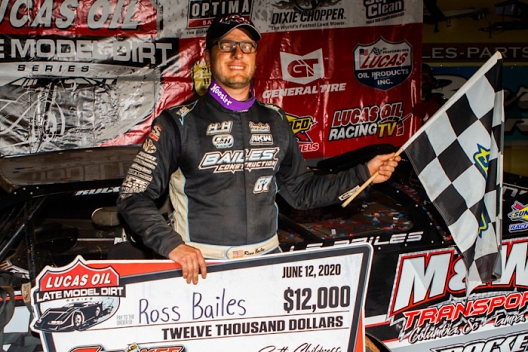 Making his first start since becoming a father for the first time exactly two weeks earlier and racing at his home track, Bailes took advantage of Brandon Overton’s deflating right-rear tire on the final circuit to shoot into the lead on the backstretch and claim his second career triumph on the national tour.

“Man, this is unbelievable,” said Bailes, whose wife, Constance, delivered the couple’s first child, Samuel, on May 29. “We’ve been through a lot this year — new kid, new ride — and it’s just awesome. And to do it in front of my home crowd, it couldn’t get any better.”

Driving a brand-new XR1 Rocket car for Big Frog Motorsports owner Augie Burttram of Ocala, Fla., Bailes started from the pole position and led the race’s first 22 laps before ceding the spot to Overton. He regained it from the Evans, Ga., driver on lap 27 following a restart but gave it back to Overton, who briefly slipped to third behind Bailes and Jimmy Owens of Newport, Tenn., on lap 46 while working slower traffic — and then it appeared he might be fated to settle for a runner-up finish.

But after the race’s fifth and final caution flag flew on lap 49 for Lucas Oil Series points leader Tim McCreadie of Watertown, N.Y., slowed with a flat right-rear tire while running sixth, a green-white-checkered finish gave Bailes new life. He darted underneath Overton’s slowing Wells Motorsports Longhorn car off turn two on the last lap and streaked away to take the checkered flag 1.461 seconds over Rocket Chassis house car pilot Brandon Sheppard of New Berlin, Ill., who overtook Owens for second place on the final circuit.

Owens placed third in his Ramirez Motorsports XR1 Rocket while the 29-year-old Overton, who led laps 23-26 and 46-49, limped to a fourth-place finish with his machine’s right-rear tire cut down. Outside polesitter Chris Ferguson of Mt. Holly, N.C., completed the top five spot in a Bloomquist Race Car that he letter with the No. 10 for the event in memory of his friend Dylan King, who passed away last year.

Bailes thought he might have allowed a golden opportunity slip through his fingers after he relinquished the lead to Overton on lap 46, but good fortune was ultimately on his side.

“The car tonight was better than the driver,” said Bailes, who called his fresh No. 58 mount “unbelievable.” “Usually you can go up top here to get around lapped traffic and I did one time, and then it started rubbering up and I had to be on the bottom. And then I couldn’t get by ‘em on the bottom and I just wasn’t making the right calls.

“There on that last lap I saw him start wheelie-ing there (in turn two with his right-rear tire going soft) and I thought, ‘Here we go. I just gotta get by him,’ and that’s what we did.

“I hate it for Brandon,” he added. “I gave him two opportunities to get by me and he did. Luckily I was on the good end of that one (on the last lap).”

Bailes’s victory came in his fourth start for Big Frog Motorsports, one of three teams he’s affiliated with this season. His previous outings resulted in a pair of runner-up finishes on Feb. 7-8 at Screven Motor Speedway in Sylvania, Ga., and a sixth-place run on May 7 at Senoia (Ga.) Raceway.

The success also marked the first-ever Lucas Oil Series win as a car owner for Burttram, who has fielded Dirt Late Models for several drivers from Florida and other Southeastern states in recent years. Bailes previously captured a Lucas Oil A-main on April 5, 2019, at 411 Motor Speedway in Seymour, Tenn.

“That’s pretty awesome,” Bailes said of earning a national touring series victory for Burttram. “I just wanted to get in their car and prove that we could do it. They’ve got as good equipment as you can get.”

Sheppard, 27, never had an opportunity to threaten Bailes during his slow-but-steady climb from the sixth starting spot to a second-place finish.

“I think I ran the top a little bit too early,” said Sheppard, who took advantage of an off weekend from World of Outlaws Morton Buildings Late Model Series competition to battle the Lucas Oil Series regulars. “The first few laps I had to run the top get by a few guys and I think I burned my tires up, but all in all, another second place run here at Gaffney in front of a packed crowd … it’s really awesome to see all these fans out here. I really do miss it. No better place to come to pack ‘em in than here because they do it every time I’ve been here.

“I think we had a car capable of winning. I just need to win a heat race (to start closer to the front). I preach that all the time. These guys are so tough out here, between the national guys and guys like Ross that come in here and beat us sometimes.

“This is the second time I’ve been here in a row that I’ve ran second to Ross,” he added, recalling his runner-up performance in Bailes’s first-ever WoO win at Cherokee on May 3, 2019. “It’s nothing to hang your head on. He’s a really good driver and he’s a good dude and he deserves to win it just as much as any of us.”

The 48-year-old Owens fell short in his late-race bid, but his third-place performance marked his eighth consecutive top-five finish in Lucas Oil Series competition. He also grabbed the points lead from McCreadie, leaving Cherokee with a 30-point edge over the New Yorker.

“I jumped to the high side there (near the end of the feature),” Owens said. “We were probably a little harder on tires than the rest of the guys, but I was gonna go up yonder and put on a show and it didn’t work out the way I wanted it to.”

Before McCreadie triggered the race’s final caution period, other yellow flags flew for Christian Thomas, who slapped the homestretch wall on lap eight; Kyle Strickler slowing with mechanical trouble on lap 12 while running fifth; Michael Brown falling off the pace on lap 26; and Hudson O’Neal slowing on lap 47.

Notes: Bailes became the 10th different winner in 15 Lucas Oil Series events this season. … Bailes’s wife accompanied him to Friday’s race while his aunt stayed home with their infant son. … Bailes swept the night, adding the feature win to his overall fast-time honor and a heat-race victory. … All four of the night’s heats were won by drivers who weren’t Lucas Oil Series regulars. … A big crowd packed the Cherokee grandstands, marking the the first time the Lucas Oil Series ran in front of spectators since February. The circuit’s six-race Reopening Tour last month at Golden Isles Speedway near Brunswick, Ga., and East Bay Raceway Park in Gibsonton, Fla., was contested with fans not permitted to attend due to coronavirus concerns. ...Overton fell one lap short of winning a third consecutive Lucas Oil Series feature after capturing the previous two events at East Bay on May 26-27; he would have been the first driver to win three in a row on the series since Chris Madden won twice at Florence Speedway in Union, Ky., and once at Batesville Motor Speedway in Locust Grove, Ark., last August.