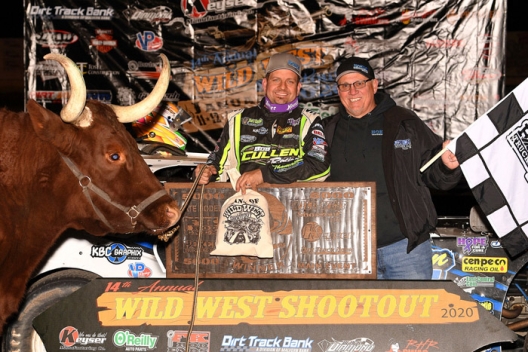 When the 38-year-old Chatham, Ill., driver got word that his wife Shannon, who for years has battled a chronic autoimmune condition, had a seizure Friday night, racing suddenly took a back seat.

But assured of Shannon's improvement, Shirley eventually decided to stay around for the opening night of the Keyser Manufacturing Wild West Shootout, and the night ended with an emotional driver in victory lane grateful for his success — and for his wife.

“It’s a little emotional,” Shirley said haltingly, his voice cracking in victory lane. “A lot of people know I struggle racing because of my wife’s illness. She had a seizure last night and I wasn’t even sure I was going to be able to be here, and luckily the good Lord let her come home (from the hospital). What can I say, I mean, I’ve just been blessed, blessed with a great team.

“Nobody really understands how it is to be on the road for me. It’s not like, ’Hey, you get to go on the road.’ You know my wife’s back home and that’s all I can, she’s the reason while I’m here.”

Shirley made sure he could call his wife and three daughters with good news after taking advantage of home-state driver Ricky Thornton Jr.'s lap-29 slipup. The sixth-starting Shirley pulled away over the final 10 laps for a $5,000 victory in the 40-lap miniseries opener.

Shirley took the checkers 1.905 seconds ahead of fellow Illinois driver Frank Heckenast Jr. and remains the lone driver with a crack at Keyser Manufacturing's Quarter-Million Challenge that pays $250,000 for a six-race miniseries sweep. The bonus program also pays $100,000 for five victories, $25,000 for four victories or $10,000 for three victories in the Late Model division.

Shirley, beginning the season with an ambitious schedule of winter race through January and February, was glad to get his Bob Cullen Racing team on track after a mediocre performance last weekend in World of Outlaws Morton Buildings Late Model Series at Vado (N.M.) Speedway Park.

“That was the point of coming out here, so me and Anthony and Aaron and Mikey, everybody could gel. Just like Vado … we had some things and miscues there where we just didn’t do a good job. We worked three days and Anthony took the whole car apart,” said Shirley, who climbed on the back of one of the huge steers in victory lane in celebrating. “Just looking forward to get the races in and some laps and just thankful that the good Lord blessed me.”

While Heckenast gave Illinois a 1-2 finish, Thornton, who dominated the first 28 laps but slipped over the turn-four cushion to open the door for Shirley, ended up third while Brandon Sheppard of New Berlin, Ill., used a lap-26 restart to race from ninth to fourth. Chris Simpson of Oxford, Iowa, rounded out the top five.

Heckenast was glad to be among three Illinoisans in the top five as he improved seven positions in his Arizona Speedway debut.

“This place is cool. I wish we would’ve run better in the heat and didn’t have to start eighth, but it is what it is,” said Heckenast, who had to adjust to his expectations of the third-mile oval.

“It’s absolutely nothing like the videos. I watched videos and videos and videos, and that had me off a little bit (in Friday’s practice). I don’t know if they changed the track or whatever. It was top-dominant, but I thought there was more of a bottom, every video I watched. But the track was good. They do a great job. The facility is awesome. They got a lot of cool stuff going on they don’t do at a lot of other races. Hell, it’s the biggest bull I’ve ever seen up here.

“I’ll try to get one step better tomorrow. Shirley was pretty damn good, but we’ll see if we can get him.”

Thornton, who was trying to become the Wild West Shootout’s second home-state winner, kicked himself for making a mistake in his Casey Skyberg-owned car.

“I just screwed up. That was pretty much it,” said Thornton, who led by as much as three seconds before halfway. “It sucks to lead that many laps and kind of give it away there towards the end, but you know, we’ll learn from this. We’ve got a really good car. We kind of struggled last week at Vado, so it’s nice to come here and have a good run. I’m kind of looking forward to the rest of the week.

“We kind of left the modified at home just so we could kind of concentrate on this, and I think that probably helped us the most. … I’ve definitely gotta thank Casey for letting me drive this thing.”

The feature was slowed by two cautions, first on the 26th lap when 18th-running Ryan Gustin rolled to a top on the frontstretch and again on lap 32 when polesitter Brian Birkhofer slowed after blowing out a right-rear tire.

The Arizona miniseries continues Sunday with another $5,000-to-win Super Late Model program with modifieds and X-mods on the undercard. Hot laps are scheduled for 3 p.m. MST with racing scheduled for 4:25 p.m.

Notes: Fourteen drivers completed 40 laps. … Cade Dillard of Robeline, La., a winner at last year’s WWS, retired without taking a lap after breaking a right-rear hub during pace laps. … The opening night's fifth heat was a wild one, littering the track with damaged cars. Jay Morris nearly went completely over the wall in turn three and four; his car suffered serious damage. On the race’s final lap, Cade Dillard made contact lapping David Vennard, whose car got into the turn-two wall and then rolled after collecting Nick Deal, whose engine caught fire in the aftermath. No one was injured but feelings were hurt. … The Late Model driver to click off the fastest time trial lap among the six miniseries races gets $1,000 from Premier Waste Services (and each event’s fast qualifier picks up $100 from the fast-time sponsor). … Arizona Speedway’s weekly drivers picked up their trophies at the track’s postseason banquet in the concession area just before Saturday’s hot laps.

The field of Late Models will be split into six groups for time trials with officials employing combination hot-lap/time trials to set the lineups for six heat races. Drivers start heats straightup by time.