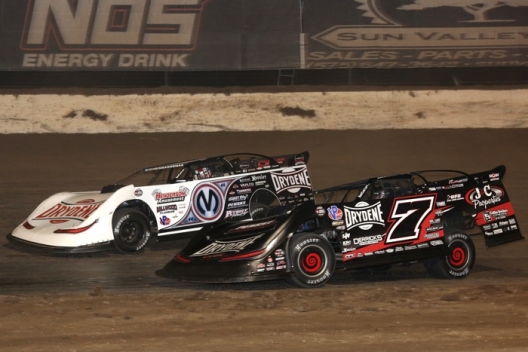 VADO, N.M. (Jan. 3) — Chris Madden has his sights set on the 2020 World of Outlaws Morton Buildings Late Model Series points title. He conceded the fact after starting his quest for the crown with a victory in Friday’s season-opening 30-lap Battle at the Border feature at Vado Speedway Park.

“I would like to think I’ve always been on a mission, but absolutely,” Madden said when asked about his mindset heading into the WoO campaign. “I want to win one of these championships. I think I got the team to do it with this year.”

Madden, 44, of Gray Court, S.C., surged out of the very-early 2020 WoO gate — the national tour’s earliest lidlifter ever, in fact — looking very much like the driver who put together a spectacular second half of the ’19 season after joining Scott Bloomquist Racing. He swept the circuit’s debut at Royal Jones’s spic-and-span, 1-year-old facility outside Las Cruces, N.M., setting fast time, winning a heat race and capturing the feature’s $5,000 top prize.

After swapping the lead three times in the first 11 laps with fellow Drydene-sponsored racer Ricky Weiss of Headingley, Manitoba, Madden controlled the final 20 circuits to register his 27th career WoO triumph. He survived a late bid by defending WoO champion Brandon Sheppard of New Berlin, Ill., to defeat the Rocket Chassis house car pilot by 0.472 of a second.

Weiss, the 2019 WoO Rookie of the Year, settled for a third-place finish after nosing ahead of Madden to lead laps 1 and 10, keeping him winless in WoO competition. The 31-year-old briefly slipped back to fifth place shortly after losing second to Sheppard on lap 19 but rallied to grab the final podium position with his Bloomquist Race Car.

Scott Bloomquist of Mooresburg, Tenn., started and finished fourth — though he did briefly climb as high as third on lap 21 — and fifth-starter Mike Marlar of Winfield, Tenn., completed the top five in his Ronnie Delk-owned XR1 Rocket car.

Madden raced off the outside pole to emerge victorious after finding the optimum route around the 3/8-mile oval that boasted a slick-and-smooth surface. He battled hard with Weiss and Sheppard throughout much of the caution-free feature's first half before maintaining a short edge of a few lengths in the closing stages.

“I just kept my momentum and hit my marks and didn’t slip my wheels,” Madden said. “You had to work some. Lapped traffic got down there into the infield and knocked the tires in and a bunch of crumbs blew across and that kind of hurt the racetrack too. But I knew if I just didn’t mess up it would be hard for them guys to pass me.”

Sheppard, 26, nearly snuck by both Madden and Weiss several times early in the race and ran within striking distance of Madden after securing second place with 11 laps remaining. He couldn’t find enough traction to keep Madden from reaching victory lane, however.

“We were right there, but the racetrack didn’t allow much passing,” said Sheppard, who started third. “I got by Ricky there midway I think it was … he slipped up a little bit in the dust out of the infield that was getting thrown up on the racetrack and I was able to get by him.

“I had a really good race car but just didn’t have enough to get by Madden. (With two laps to go) Boom (Briggs), the lapped car, was racing me back, kept getting beside into (turns) three and four a couple laps, and so I thought, Well, heck, I’ll try it up there (on the outside). It can’t be much worse than where we were running in the bottom. So I went up there a few times but couldn’t make it work.”

Sheppard would have preferred the track surface to be more like it was for Thursday night’s practice session.

“The racetrack didn’t allow much lanes out of the bottom, so they’ve got to work on that a little bit,” Sheppard said. “I think everybody was complaining — well, not me, I wasn’t complaining, but there was a few guys who were complaining a bunch about the track being too wet the first night (for practice). There was a cushion, there was some holes — a little bit of character, just what we like to see. But I guess a lot of guys like to see the track one lane apparently, I don’t know.

“The racing was good, but there wasn’t a lot of passing. There was some side-by-side racing, but it was hard to make up time. You had to mess up bad for somebody to pass you.

“I’m sure the track guys will work on it,” he added. “They seem to know what they’re doing here.”

Friday’s surface played into the hands of Madden, who proved he’ll be formidable WoO rival for Sheppard — even though he entered the weekend less than 100 percent. He hit the track still getting over a holiday-week battle with the flu and with room for improvement with his Scott Bloomquist Racing effort.

“The day after Christmas I got sick,” Madden said. “I had to go get a shot (at a doctor’s office) before I come out here. I feel better, but it’s still in my chest and I can’t barely talk (from a hoarse throat).

“We (also) gotta get some more equipment built up. We got a new truck and trailer but we’ve got to finish get it equipped … I’ve already got it here, but we just had to kind of throw things in it to get it here so we got a lot of organizing. And we’re building a new car at home to take to Florida (for February’s Speedweeks) and we’ll be building some more. We’ve got a lot of work.

“I hope my guys can last and I can last,” he continued, “and maybe in (November) in Charlotte I’ll be crowned the champion.”

The Battle at the Border continues on Saturday night with another program topped by a 30-lap, $5,000-to-win feature. The weekend concludes Sunday with a grand finale topped by a 75-lapper carrying a $15,000 top prize. Hot laps are scheduled for 3 p.m. MT both days.

The earliest season opener in the history of the World of Outlaws Morton Buildings Late Model Series — as well as the national tour’s first-ever visit to New Mexico — boasts a 42-car field. … The 3/8-mile Vado Speedway Park — built and opened less than a year ago by veteran Las Cruces, N.M., racer and businessman Royal Jones — sits hard alongside Interstate 10 about a half-hour’s drive from El Paso, Texas. … Skies were bright and sunny all day and are forecast to remain that way for the remainder of the three-race weekend, but chilly conditions will prevail at race time. Friday’s high temperature reached only the low 50s and temps will dip into the 30s by the end of the program. … The weekend provides a rare home-turf racing opportunity for several well-traveled drivers who hail from nearby Las Cruce — notably twin brothers Stormy and Johnny Scott and Garrett Alberson, who spent the past two years as the crew chief for Earl Pearson Jr.’s Black Diamond house car effort. Alberson is driving New Mexico podiatrist Dave Deetz’s No. 01, a machine he’s campaigned in the past. … WoO rookie candidates who made the long haul to the Southwest to begin their series bids are Matt Cosner of Ridgeley, W.Va., Kody Evans of Camden, Ohio, and Ashton Winger of Hampton, Ga. … Brian Birkhofer of Muscatine, Iowa, was scheduled to compete in Vado’s events but didn’t make the trip; instead, his car owner, Jason Rauen of Farley, Iowa, will race all three nights. … Ivedent Lloyd Jr. of Ocala, Fla., is racing as a teammate to WoO regular Blake Spencer of St. Augustine, Fla. ... WoO officials announced a slight change in the original-start procedure for 2020, abandoning the start-box format in favor of a start cone at which the front-row starters must be side-by-side. … Another new WoO rule for '20 concerns provisional starters: just the top 25 drivers in the points standings will be eligible for provisional spots. If the two provisionals aren't filled by the drivers in the top 25, the first non-qualifier from the B-mains will receive a feature starting berth. ... Vado’s three WoO programs — $5,000-to-win 30-lappers on Friday and Saturday and Sunday’s 75-lap, $15,000-to-win finale — offer full series points.