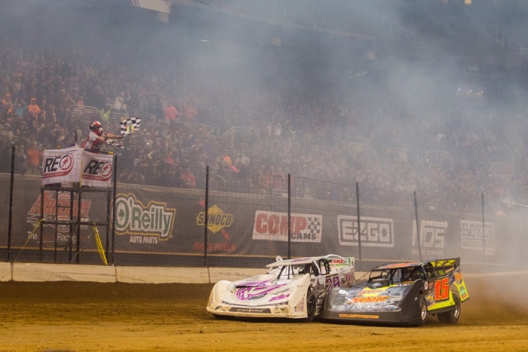 ST. LOUIS, Mo. — Tyler Carpenter came from the hills of West Virginia to a big city dirt track, not sure if he belonged among the sport's elite drivers. As thousands of roaring fans at The Dome at America's Center assured him with his $30,000 victory in Saturday's fourth annual Arizona Sports Shirts Gateway Dirt Nationals, he definitely belongs.

Surviving a wild race on a rugged surface, the 28-year-old Parkersburg, W.Va., driver barely held off Brandon Sheppard in the 40-lap finale for a career-high payday. With Sheppard’s Donny Schatz-owned car virtually shoving him across the finish line, Carpenter’s tattered car took the checkers by a 0.216-second margin on the temporary fifth-mile oval in a race where drivers wrecked, smoked or flipped their ways out of contention.

"Dude, I ain’t even sure if it’s real yet. It’s just something a poor boy like me dreams about," Carpenter said while trying to digest adding his rich payday to Friday's $5,000 preliminary victory. "I ain’t saying I ain’t got no money, but I don’t feel like I belong in this atmosphere. I race hard, and I just see me as like a regional racer, $1,500, $2,500-to-win races, I’m golden. To come here, to even sniff around at the win … making the race was my goal."

Sheppard, who rallied from the eighth row, finished nearly three seconds ahead of third-finishing Billy Moyer of Batesville, Ark., while Jonathan Davenport of Blairsville, Ga., and tail-starting Gordy Gundaker of St. Charles, Mo., rounded out the top five.

Blair Nothdurft of Sioux City, S.D., was the only other driver to complete 40 laps as the rough conditions and other issues forced many drivers out, including two-time Gateway winner Bobby Pierce of Oakwood, Ill., who retired on lap 28 after running as high as fourth.

The fourth-starting Carpenter took the lead from Rusty Schlenk of McClure, Ohio, on the 10th lap and controlled the race through the middle stages before fellow second-row starter Ryan Unzicker of El Paso, Ill., charged into the lead on lap 30.

Unzicker led laps 30-31, but his race ended with his car in a heap when he caught a rut at the top of turn one and his car flipped on its lid. Unzicker wasn’t injured, but the wreck required a red-flag cleanup.

“I’m not going to be able to sleep tonight,” a disappointed Unzicker said.

Besides Unzicker’s demise, a lap-15 caution involved several contenders when second-running Patrik Daniel got into the backstretch car, collecting third-running Shannon Babb, whose car bounded into the air while sustaining heavy right-side damage. Unzicker survived a foray to the infield after getting into Babb, who retired along with the pole-starting Daniel.

Other contenders falling by the wayside included Schlenk, who pulled to the infield while running third on lap 23, and Tanner English of Benton, Ky., who started 13th and was challenging Carpenter from the second position when smoke began pluming from his car, forcing him out with engine woes in the final laps.

Carpenter called his triumph "as big as it gets. That’s probably the biggest thing I’ll ever do. I’m as numb as all get out." His battles with Unzicker and Sheppard will go down in Gateway history as among the events most exciting moments.

"It relaxed me, but once the yellow come out and they lined us back up, I was just like, 'Holy smokes, it’s on again,' because you know with nine laps to go, anything can go down. At this little joint, it’s bound to happen. If anybody’s got any elbow grease left in ‘em, they’re gonna be rubbing around.

"I don’t know how we pulled it off, but we did. My car was toed (out) … I don’t even know which ways the wheels was turning. I was turning right to go straight, hit a bump and it’s left-right, holes about 4 foot deep. It’s just all-out Royal Rumble and let the best car win."

Carpenter turned out to be driving the best car, but by less than a car length as Sheppard took a final shot at the winner exiting turn four heading for the checkers.

"We got to third and we were about a half-track behind and I was running ‘em down, running ‘em down, and then I seen Unzicker turn over and the only person in front of him was Carpenter so I thought, Holy cow, I’m in second," Sheppard said. "I knew right there we were gonna have something for ‘em. Really, from the feature last night, we found what we needed to do with our car.

"There at the end, it was just a little bit too rough for what I was trying to do. I probably could’ve, would’ve, should’ve won that race if I would’ve done a few things different, but Tyler’s done a good job all weekend. Their cars are definitely good in this condition, this stop-and-go deal, and he’s ran good here a lot. He’s well deserved of it."

That's just what Carpenter wanted to hear in trying to belong among the sport's best racers.

"We needed it. We earned it," he said. "And that just goes to show, you work hard enough, you’ll get what you want."

Patrik Daniel picked the pole position for the 40-lap feature in the redraw among the six drivers who locked into the finale through Friday’s twin 20-lap preliminary A-mains. Rusty Schlenk will take the green flag alongside Daniel, followed by Ryan Unzicker, Tyler Carpenter, Mike Spatola and Shannon Babb. ... Event promoter Cody Sommer will look over non-transferrees from consolations and choose two provisional starters for the finale’s 20-car field (Scott Bloomquist, who opted to not compete in a B-main, won’t be one of them, officials said). … Bobby Pierce’s flag-to-flag, caution-free victory in the first consy was a rarity as the rest of the last-chance races were full of wrecks, action and hurt feelings. … In the second consy, Joey Coulter tried to overtake leader Allen Weisser in turn two on the last lap. Contact sent Coulter spinning and Weisser into the backstretch concrete, opening the door for Jonathan Davenport to shoot the gap and edge Weisser by inches at the checkers. … The third consy ended with Brandon Sheppard rubbing under fellow Illinois driver Bob Gardner in turns three and four on the last lap for the final transfer spot. Gardner wasn’t happy with Sheppard after the race, but they literally hugged and made up in the pits after Gardner approached B-Shepp to discuss the incident. … The fourth B-main included a frontstretch tangle between Kevin Smith and Gordy Gundaker that sent Smith’s car into a rollover accident. Smith wasn’t hurt after coming to rest on his roof, but Gundaker expressed his displeasure by kicking Smith’s car after it was righted, criticizing him in a live interview and fighting past track workers in trying to get to Smith. … Jason Feger’s hopes of transferring to the feature through a B-main ended when he pulled off early in the third consolation due to a flat right-rear tire. Barring a provisional, Feger will sit out Gateway’s headliner for the third straight year. … Drivers who won Friday heats as well as Saturday consolations: Billy Moyer and Blair Nothdurft.