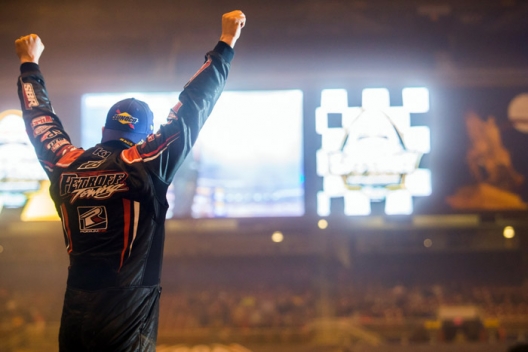 ST. LOUIS, Mo. — Shannon Babb has made his reputation at The Dome at America's Center — if not every track in the Midwest — with a wall-banging style that throws caution to the wind. On Friday night, he made $5,000 by shelving his devil-may-care style, at least temporarily.

Frequently sticking with the slower and safer low groove, Babb stalked upstart Patrik Daniel of Wills Points, Texas, early in the race before taking advantage of Daniel’s turn-four bobble on the eighth lap and cruising into the lead.

Babb’s conservative run — and a few struggles with lapped traffic — gave Daniel hopes of regaining the lead the next several laps, but the winner unleashed his high-side dominance with five laps remaining to pull away for a 2.935-second victory over Rusty Schlenk of McClure, Ohio, who took second from Daniel with two laps remaining.

Babb’s 20-lap victory guarantees him a top-six starting spot in Saturday’s $30,000 finale at the Dome, where he was the event’s inaugural feature winner in 2016.

“No doubt, this Dome is awesome. It’s been great to me. I love the fans. Dirt in December is unreal. I’ve gotta say hat’s off to (promoter) Cody (Sommer) and his crew. They do a fabulous job getting it together,” Babb said in victory lane. “It’s not the smoothest thing we would like, but they did a helluva good job getting it all in here and getting us to race.”

Behind Schlenk and Daniel — also locked into top-six starting spots along with Babb and the top three from Friday’s other preliminary, won by Tyler Carpenter — was Lucas Oil Late Model Dirt Series champion Jonathan Davenport of Blairsville, Ga., in fourth and former Dome winner Gordy Gundaker of St. Charles, Mo., in fifth.

Ricky Thornton Jr. of Chandler, Ariz., started 12th and quickly raced into the top five, but he dropped out running third when his car appeared to bottom out and lose power exiting turn four as he battled with Babb and Daniel.

While the pole-starting Daniel bounded through the track’s rough spots in the early laps, Babb spent more time in the smoother inside groove while tracking him.

“I don’t even know who the hell the guy was on the pole, but he was fast,” Babb said. "I’ve never met him before but he was really good. I just thought I’d let him lead for a while and see what his line was going to be. It’s really demanding to run 20 (laps) out there.”

Babb knocked the spoiler off his car during Thursday’s two time-trial laps, and he’s beaten up his share of sheetmetal touring the Dome the previous three seasons. But he made sure to stay clean and green Friday night.

“I told myself just keep it out of the fence and keep it pointed in the right direction,” he said.

Babb’s biggest problem came in the second half of the race as the frontrunners came up to lap Mike Glasscock, a fellow Illinois driver who had his hands full trying to avoid holes in the track.

“I could see his driveshaft and oilpan a couple of times,” Babb said. “I just had to find a way around him, and I went to the top and found a hole, and I had to get it on there the last five laps.”

Babb will gun for the weekend finale’s $30,000 paycheck on Saturday night.

“I don’t see it being too much different,” Babb said of the track. “We’re going to tweak on the car a little bit, go over the shocks, maybe add a little gas pressure to ‘em, make it so it’s good there the last 25 (laps).”

Friday’s second preliminary feature was slowed by three early cautions, none for serious incidents in a race where eight of 20 starters finished on the lead lap.

On the first lap, heat winner Scott Ward broke a driveshaft and dropped into the infield, triggering a frontstretch scramble. On lap four Kip Hughes ended up sideways in turn four, collecting Jadon Frame and Mike Glasscock. A lap-four restart saw another yellow when Kevin Smith spun in turn two and Duane Chamberlain didn’t come up to speed.

Action continues Saturday at the Dome with consolation races scheduled for 3 p.m. CST following by opening ceremonies prior to the weekend’s main events at 7 p.m. The always popular driver introductions are part of the pre-race festivities before the Late Model (40 laps), midget (30 laps) and modified (30 laps) main events.

Shannon Babb led all the way in the caution-free first heat. … The front wheels of Mike Epplett’s car were perched atop the wall at the turn-one entrance at the outset of the second heat, requiring another lengthy delay for fence repair. … Patrik Daniel led all the way in winning the third heat. … The fourth heat was held up by a turn-four pileup triggered when Duane Chamberlain got sideways in turn four, collecting Michael Guldenpfenning, Brian Mullins and Scott Bell. Only Rusty Schlenk and Kevin Smith completed eight laps. … Blair Nothdurft held off Jonathan Davenport in the fifth heat with Mike Glasscock right in the mix. … Payton Looney was dominating the final heat when a flat tire forced him to the infield during a lap-five caution period. … Paul Roider spun to the infield after losing the third and final transfer spot to Matt Henderson in the final heat. … On the restart, Henderson caught the rear of Gordy Gundaker’s car, spinning him out of the second spot; Henderson inherited the lead with Looney’s demise. … It took just over three hours to complete 12 heats.

Gateway Dirt Nationals officials made a significant change in Friday’s schedule of events shortly before the planned start of Day 2 competition, moving all of the open-wheel modified action — hot laps, qualifying, heats, B-main and 20-lap feature for the 25 entries — to the end of the card. Modifieds will not hit the track until the Dirt Late Model and midget preliminary features are completed. … Bobby Pierce of Oakwood, Ill., who has won the past two Gateway Dirt Nationals finales, didn’t qualify to his satisfaction on Thursday (13th fastest in his group). But his full-fender results were much better than how he fared with his modified, which he rolled onto its roof during the preliminary feature after he hit the brakes entering turn one, stalled the engine and slid backwards into the outside wall. He wasn’t injured and has the modified’s relatively light damage repaired for Saturday’s show. … How did turning the second-fastest lap in Thursday Group B qualifying session leave Scott Ward of Hayit, S.D., feeling? “Nervous as hell,” the 50-year-old Ward said with a laugh while awaiting the start of Friday’s hot laps. “I didn’t sleep worth a s— last night. I would’ve rather went right into the heats last night than wait until today to race.” Ward starts the second heat from the pole position as he chases his first starting berth in Gateway’s Saturday-night finale. … As the start of Friday’s hot laps closed in, Rusty Schlenk of McClure, Ohio, and several members of his crew were seen diving under the hood of Schlenk’s Domination Race Car in search of a coolant leak that was discovered when they fired up the engine in the pits. … Before Friday’s hot laps, the car driven by Trevor Gundaker of St. Charles, Mo., who turned 17 on Thursday, sat in the pits with a tarp covering its front end. His crew chief, Robert Archambault, said the covering was an attempt to keep as much heat in the machine’s engine as possible following the short warmup period teams are permitted inside the building. The goal for teams is to maintain an optimum engine temperature of approximately 190 to 200 degrees.