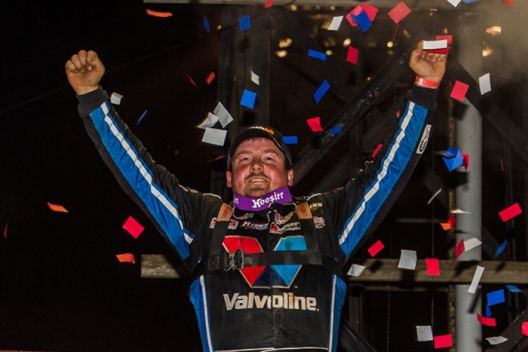 “It’s definitely a crazy feeling,” Sheppard said. “Looking back at the start of my career, I never thought I’d be standing here saying I won three Dirt Track World Championships, let alone three $100,000-to-win races in a year. It’s definitely an amazing feat that we’ve accomplished. My team is just amazing. I can’t say enough about them guys. They’re just phenomenal and they keep this thing right up front for me every night. We’re in contention everywhere we go.”

Charging around the high side, the fifth-starting Sheppard pulled ahead of early race leader Jimmy Owens of Newport, Tenn., on lap 35. A string of mid-race cautions worked to the Rocket house car pilot’s advantage, reseting the field just as the frontrunners approached lapped traffic.

It was on a long green-flag run that Richards was able to close the gap between himself and the race leader, briefly assuming the point on lap 68 when Sheppard slipped up the track on the backstretch. Sheppard would retake the lead on the following circuit, continuing to show the way out front through a stretch of late-race cautions.

The race’s final yellow flag waving on lap 90, the field restarted single-file, with Sheppard cruising through the final laps to capture his 14th career Lucas Oil Late Model Dirt Series victory, his fourth of the 2019 season.

After battling with Owens in the early distance and overtaking Richards for second on lap 70, Marlar wheeled his Dukes of Hazzard-themed No. 01 to a runner-up finish. Advancing from the ninth starting spot, Tyler Erb of New Waverly, Texas, ran third, with Richards finishing fourth. Dennis Erb Jr. of Carpentersville, Ill., charged from the 12th starting spot to round out the top five.

Outside polesitter Shane Clanton of Zebulon, Ga., charged to the front of the field at the drop of the green flag, falling to Owens on the sixth circuit. Powering from fourth to second on the opening lap, Marlar fell back to fifth mid-race, working his way back past Richards to post a career-best runner-up finish.

“I was a little bit looser than I (wanted to be),” Marlar said. “I thought I tightened up enough and   I was just a little too free and actually had a little softer tire on too. Early in the race I seen I was too free and and I was softer on the tires, so I just kind of made sure that I had tires at the end and tried to take care of them early, (thinking) hopefully at the end maybe those guys would slow up. But (Sheppard) and them was pretty good. We were close, we ran right there the whole race. Just wasn’t hardy fast enough to beat them.”

It was before Saturday’s main event that Erb was officially crowned the 2019 Lucas Oil Rookie of the Year. While the Best Performance Motorsports driver was hoping to capture a fourth straight DTWC victory for his team and crew chief Randall Edwards, a third-place finish was still an encouraging way too close out his first full season on the Lucas Oil tour.

“It wasn’t too bad,” Erb said. “We’d like to have won for Randall and Best. But it was my first time even making the Dirt Track. So to finish third, I think it was pretty good. I’m happy with it. The track kind of rubbered there at the end and we just weren’t close enough up front early to be able to put ourselves in a position to win. It was a really good night for us and a good cap to the Lucas season.”

Jonathan Davenport of Blairsville, Ga., who entered the weekend having already clinched his second straight and third overall Lucas Oil Series championship, crossed the finish line in ninth place but was penalized to last (26th) in the final rundown for changing a right-rear tire that tour officials determined wasn't flat after he slowed to bring out a caution flag on lap 40. Davenport, who maintained that he slowed because he felt his car was developing a flat tire, was assessed the penalty after the race.

Lap 90: O'Neal gets into the wall in turn one to draw a caution. Sheppard leads Marlar, Erb, Richards and Dennis Erb Jr.

Lap 85: Another yellow flag waves on the ensuing restart when sixth-running Don O'Neal makes hard contact with the backstretch wall after colliding with Bobby Pierce.

Lap 68: With Sheppard slipping up the track on the backstretch, Richards leads at the line.

Lap 65: As the race leaders enter lapped traffic, Richards and Marlar have closed in on Sheppard.

Lap 35: Slipping ahead of Owens down the backstretch, Sheppard takes the lead.

Lap 29: Owens, Sheppard and Marlar race three-wide down the backstretch, with Owens holding the advantage at the line.

Lap 28: As the frontrunners enter lapped traffic and a charging Sheppard closes in on Owens, Bloomquist slips over the berm and slows to draw a caution. Owens leads Sheppard, Marlar, Richards and Tim McCreadie.

Lap 15: Steve Casebolt slows with a left-rear flat to draw a caution. Weiss and Scott Bloomquist head to the hot pit under the yellow flag.

Lap six: Gaining momentum from the restart, Jimmy Owens races door-to-door with Clanton down the backstretch, pulling ahead out of turn four to take the lead.

Lap four: A red flag falls when Stormy Scott rolls his No. 2s in turns three and four, coming to a stop wheels-up. He climbed out of the car apparently uninjured. Ricky Weiss and Earl Pearson Jr. stop to avoid the melee.

Lap one: The green flag waves at 8:29 p.m. Polesitter Chris Ferguson slips back to fifth and Shane Clanton leads the opening lap.

8:22 p.m.: Drivers are given the call to fire engines and start rolling out for pace laps.

8:13 p.m.: Feature cars have made their way the frontstretch and driver introductions are under way.

Polesitter Don O’Neal charged to the lead at the drop of the green flag, closing in on the tail of the field by the fifth lap. A yellow flag waved on lap eight for a turn-four tangle involving Tyler Carpenter and Jason Jameson. Another caution fell on the ensuing restart for a pileup in the bottom of turns three and four involving Jameson, Dave Hornikel and Rod Conley. O’Neal held his lead when the race went back green, with Jared Hawkins overtaking Devin Moran for third. A yellow flag waved again on lap 11 for debris on the racing surface. Moran retook the third spot on the restart, with Brandon Fouts battling Hawkins for fourth. With five laps remaining, the top two cars began distancing themselves from the field, with Hawkins and Fouts continuing to battle for fourth. Stretching his lead late race, O’Neal won the consolation, with Jacob Hawkins and Moran grabbing feature transfer spots.

Edging ahead of polesitter Stormy Scott out of turn four, second-starting Scott Bloomquist took an early lead. It was a tight battle for second in the early running, with Dale McDowell challenging Scott for the position. Bloomquist held more than a 2-second lead at the halfway mark, with Ricky Weiss and ninth-starting Brandon Overton closing in on third-running McDowell as the frontrunners worked through lapped traffic. With just a handful of laps remaining, Weiss overtook McDowell for the final transfer spot, with Overton in tow. Bloomquist won the consolation, with Scott finishing second. Weiss edged out Overton to run third and transfer to the main event.

The 39th annual Rhine Ag Dirt Track World Championship weekends concludes Saturday night under wonderful weather conditions. Skies have been sunny most of the afternoon with a high temperature reaching 70 degrees; evening temps are expected to remain warmed than the chill than descended on Friday evening. … DTWC polesitter Chris Ferguson of Mt. Holly, N.C., is starting the 100-lap feature for the fourth consecutive year. He’s improved his performance in each of his four previous DTWC appearances, following up a non-qualifiers’ race victory in 2015 with A-main finishes of 22nd (’16), 17th (19th) and 13th (’18). … Outside polesitter Shane Clanton of Zebulon, Ga., is making his eighth career DTWC feature start but first since 2013. His two DTWC starts at PRP (2012 and ’13) both resulted in 27th-place finishes, but he owns a career-best run of second in the 2008 event at Atomic Speedway (then K-C Raceway) in Alma, Ohio. … Jonathan Davenport of Blairsville, Ga., entered the weekend having already clinched his second consecutive Lucas Oil Series championship — officials were planning to honor him in front of the grandstand for his $75,000 crown before the start of Saturday’s program — but the $47,000 second-place points spot is not quite decided. Tim McCreadie of Watertown, N.Y., who starts eighth in the DTWC (alongside Davenport) after transferring despite suffering flat tires Friday in hot laps and his heat, will clinch the spot over Josh Richards of Shinnston, W.Va., if he finishes 20th or better. … Lucas Oil Series officials released the national tour’s 2020 schedule after the drivers’ meeting. The slate shows 56 events at 32 tracks in 18 states.

The 39th annual Rhino Ag Dirt Track World Championship wraps up on Saturday night with the 100-lap, $100,000-to-win finale. Sixteen drivers have already been locked in to the feature through Friday’s preliminaries.

The top points earners in their respective preliminary groups, Chris Ferguson of Mount Holly, N.C., and Shane Clanton of Zebulon, Ga., will start on the front row of Saturday’s main event. Josh Richards of Shinnston, W.Va., who has won the last two DTWCs, rolls off from the third starting spot.

Saturday’s program will include two consolations, with the top three finishers from each transferring to the feature. Series and track provisionals will set the final rows of the feature lineup. A $4,000-to-win Limited Late Model event and the Jim Dunn Memorial non-qualifiers’ race are also on the card.

As part of Saturday’s festivities, Jonathan Davenport of Blairsville, Ga., will officially be crowned the 2019 Lucas Oil Late Model Dirt Series champion. The 2020 National Dirt Late Model Hall of Fame class will be announced prior to Saturday’s racing action.