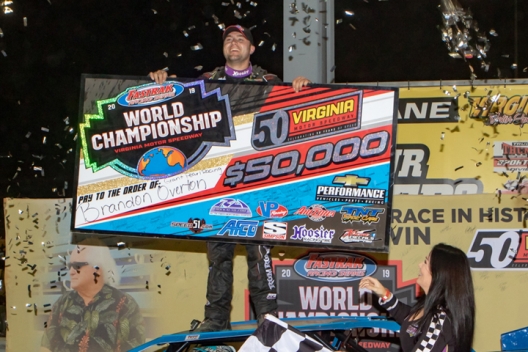 JAMAICA, Va. (Sept. 14) — Brandon Overton knew his most likely path to victory in Saturday’s Fastrak World Championship was to get an early lead. But while controlling his own pace and racing out front in clean air — the typical driver worries — were important, they weren’t his only concerns. Overton was more anxious as he thought more about tire wear and his car’s stumbling carburetor than anything else.

It turns out that neither troubled the Evans, Ga., driver as he raced to a career-tying $50,000 victory in the 75-lap main event at Virginia Motor Speedway. He grabbed the lead from his outside front row starting spot paced every circuit, keeping Ross Bailes of Clover, S.C., at bay the entire distance while carefully negotiating nine cautions that slowed the action.

“We had to swap from the E85 fuel to the CHP right before the feature because we wasn’t gonna make it. Well, we had to put a different carburetor on there and it would take off good if it was real good and cleaned out. But sometimes it would stumble,” said Overton. “The time Ross got to me in the door, that was when it like, laid (down) on me some. That’s why I was restarting so fast. I wanted to drag everybody down if we’d had that other carburetor on, but with this one I couldn’t.

“If I slowed down … I was so worried about it, when I went out there to go line up to stage, I pulled it in high gear and stomped it and it died. Like it almost cut off and I was like, this is gonna be a long 75 laps. To be honest with you, it was stumbling (so bad) in the corners that I thought, they’re gonna drive by me. I beat Ross over here for a Super (Late Model) race and we talked a little bit about it afterwards and I was like, ‘You just got hung up in them lapped cars.’ So I thought he was just playing with me. I figured he was just back there sandbagging, waiting for me to catch some traffic.”

Bailes was back there, but aside from the multiple restarts, he was never close enough to make a move for the lead once they got rolling. He finished 1.969 seconds behind Overton, while staying comfortably ahead of ninth-starting Trent Ivey of Union, S.C., who grabbed third from Justin Williams on a restart with 13 laps remaining. Williams, of Concord, Va., finished fourth while polesitter Logan Roberson of Waynesboro, Va., last year’s World Championship winner, completed the top five.

“We all thought we was gonna blow out on tires, so I thought (Bailes) was just back there riding around,” added Overton. “But after we got those restarts, they kept telling me I was gapping him and I was like, I’m not even driving. I mean, I would let off literally right past the flag stand and roll around there and be as smooth and easy as I could. Like I told (car owner Grant) Pearl, the car, everything we did to it after the top 16 locked in didn’t I feel very good.

“We bled the brakes and the brake pedal was real spongy and the carburetor that we had on it for the first go around would not run at all. And we were still third quick. And we weighed 2,600 pounds because everybody had been getting thrown out for being light. So we rolled across the scales and had to come back in and take all this led off the car and all kinds of stuff. To win, I knew when I rolled out there to take the green that I better go ahead and lead ‘cause I ain’t gonna win this thing.”

The uneasy feelings were all for naught. After bolting into the lead, Overton pulled away until the first caution on lap 21. It was the longest green-flag run in the 75-lapper as nine more cautions slowed things over the final 54 laps. Each yellow flag and subsequent restart gave would-be challengers an opportunity to steal the lead away. Williams took second from Bailes on the lap-21 restart, while Bailes repaid the favor a lap 31 restart. Overton had stretched his lead to 4 seconds ahead of Bailes, when the seventh caution slowed the pace on lap 58.

“I felt like if I was gonna get him, that’s where I was gonna get him at, on a restart or either in lapped traffic,” said Bailes. “But we never … I think we got in lapped traffic maybe once. And then that one time I pulled up beside him on a restart I might of could have slid him, but I might not have cleared him so I didn’t pressure him too bad there. After the first lap, he checked out pretty good. Once we had one lap (after a restart) he’d get wound up and get going pretty good.”

On a restart four laps later, the two made contact exiting turn four — one of the few times Overton’s carburetor issues flared up when he mashed the throttle to get rolling again — but Overton shot ahead entering turn one and pulled away again, while behind him, Ivey took the third spot from Williams.

“I felt like I had to protect my position the whole time,” said Ivey, who advanced six positions from the fifth row. “I was always racing somebody, so I couldn’t conserve tires. I knew I had to go. I had to get to the front before (the track) really locked down. I just tried to play it cool and tried not to give any positions up and I ended up sneaking by a couple of them. (Tire wear) was a concern just because I had to battle so much in the beginning. But I still kept my stuff under me for the most part. I’ve been racing Supers and I kinda know how to maneuver on restarts now a little better. That experience is really what got me up there. Once I got to third, I could feel I didn’t have anything left.”

Ivey got one more shot as the final caution came out on lap 65, but couldn’t climb any higher. The caution for Donnie Dotson and Corey Almond’s tangle on lap 65, however, did give Overton 10 laps of mostly clear track to the finish. By then he was finally able to put his mind as ease as well.

“Those last 10 (laps) I knew … when I won the last 20 grand race over here, it was about the same circumstance,” said Overton. “It was kinda rubbered through the middle and I was so loose (getting) in in (turn) three that I kept sliding out. Like I just kept missing the corner and kept missing the corner and when I came in, that tire was bald. Tonight, ’til lap 75 my car stayed stuck and stayed under me the whole time. So I knew I did a pretty good job conserving.

“So I really wasn’t worried about it. If it would’ve started getting loose, then I would’ve been panicking, but I never got that feeling so I thought I was in good shape. Ross told me I had more (tire remaining) than him. When I got to the lapped cars actually, they were slipping and sliding. They looked how I felt the last time I was here and I was just eating ‘em up on that bottom. I could go in above ‘em and just turn right down the hill and pass ‘em. I was really happy with that.

“When I seen 10 (laps) to go, when we single-file restarted, like I was nervous to death ’til 10 to go. When I seen 10 to go, I was like, I’ve done led it this long and I’m not loose in, I’m OK. The last 10 laps was fine. (Pearl) kept telling me I had a big lead. I told myself on that start, just get a good start and if I put some distance on ‘em, I’m just gonna stay there and I’ll be fine. So I just slowed myself down and just drove around there 10 more laps.”

Notes: During opening ceremonies, series officials and VMS’s Sawyer announced that the 2020 Fastrak World Championship will again pay $50,000. … Overton’s previous $50,000 victory came last season in the Hillbilly 100 at West Virginia’s Tyler County Speedway. … A week after winning more than $80,000 in a 50/50 drawing during the World 100 at Eldora Speedway, Georgia driver Jimmy Sharp Jr., finished 12th at VMS. … Twenty of the 28 starters finished the race, with 19 completing all 75 laps. … Eight of the nine cautions were the result of tire issues, with the worst incident coming on a lap-31 restart when Tyler Carpenter slowed with a flat, causing a log jam in turn two, resulting in Carpenter getting spun by a competitor and then collecting Russell Erwin. Both Carpenter and Erwin were done for the night. … Nick Hoffman of Mooresville, N.C., won the $6,000-to-win modified main event.

Ross Bailes of Clover, S.C., and Kyle Lukon of Burgettstown, Pa., picked up convincing wins in the second round of heats. Bailes won the second heat by a whopping 8.281 seconds ahead of Donnie Dotson, while Lukon finished 3.260 seconds head of Brandon Overton in the fifth heat. Other heat winners in Round 2 included Corey Gordon of Charlotte, N.C.; Matt Long of Concord, N.C.; Jensen Ford of Piney Flats, Tenn.; Justin Williams of Concord, Va.;  Jason Fitzgerald of Middleburg, Fla.; and Logan Roberson of Waynesboro, Va.

After solid efforts in the first round, things went south for drivers Dennis Franklin and Jesse Lowe in the second round. Franklin, of Gaffney, S.C., was second in passing points after the first round, but a crash left him with an 11th-place finish in the sixth heat and dropped him to 32nd on points. Lowe, driving the CVR Race Car normally driven by Michael Page, was 17th overall in the standings heading into the second round, but a crash in the final heat of the night hampered the Crossville, Tenn., driver’s efforts.

The checkered flag fell on the final heat of the night at 2:18 a.m. Roberson earned the most passing points and will start on the pole of Saturday's main event with Brandon Overton on the outside front row.

Powell won the second heat after apparent winner Andy Anderson was light at the scales. Anderson wasn’t the only driver who ran into trouble in the post-race weigh-in. Travis Pennington had his runner-up finish in the first heat disallowed as did Mark Whitener, who crossed the line second in the seventh heat. Matt Long and Corey Gordon were also among drivers who were light at the scales.

The Fastrak Racing Series sanctions the 16th annual Fastrak World Championship at Virginia Motor Speedway, a half-mile oval outside near Jamaica about 55 miles east of Richmond owned and promoted by Bill Sawyer. A first-place prize of $50,000 — a record for Crate Late Models — has been posted for Saturday night’s 75-lap A-main as VMS celebrates its 50th anniversary season.

The two-day event kicks off Friday with hot laps and two rounds of heats for the Crate Late Model competitors, along with a identical two-round heat-race format for open wheel modified entrants. No time trials will be contested for the Crate Late Model division; heat races will be aligned by a draw and combined passing points from the prelims will set the lineups for Saturday’s main event.

The top 16 drivers in heat race passing points will be locked into the 75-lap feature, while remaining drivers will run consolation races on Saturday to secure feature starting spots.