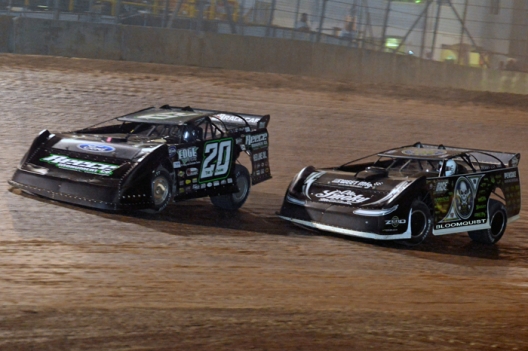 Fortunately for Owens, he was able to joke about his slip over the cushion in turn two after holding on to win the World of Outlaws Late Model Series A-Main.

“I was waving at the crowd up yonder,” Owens said with a smile when asked what happened on the race’s 19th circuit.

Owens’s edge on second-place Scott Bloomquist of Mooresburg, Tenn., at the time of his rare miscue — over 2.5 seconds — was large enough that he had room for error. He was still several car lengths ahead of Bloomquist when he got back in the fast groove and stayed there to the finish, turning back a stiff late-race challenge from the two-time Firecracker champion to complete a flag-to-flag victory off the pole position.

“When we got behind them lapped cars it was like as soon as you got within five car lengths of them they’d throw that dust up,” Owens said, describing the moment that nearly cost him his first-ever triumph at Lernerville and the eighth WoO win of his career. “I entered that corner just like always but them crumbs were up there and I just slid off the track a little bit.

“I knew we had a pretty good lead, though, when we didn’t lose the lead.”

Bloomquist, 50, made a determined bid to unseat Owens, but the race’s outside polesitter couldn’t pull off a pass of his fellow Tennessean. Bloomquist stuck his car’s nose inside of Owens several times during the closing laps but settled for his second runner-up finish in as many nights, 0.510 of a second behind the winner.

Tim McCreadie of Watertown, N.Y., hustled forward from the seventh starting spot to third place by lap eight and held strong to the position to the finish. He flashed under the checkered flag alone in third place but nearly three seconds behind Owens.

Owens rode the extreme outside lane of the four-tenths-mile oval to the victory, sticking to the lane even after flirting with disaster on lap 19 and seeing Bloomquist appear underneath him.

While Owens noted that the “top side was going away,” there was enough grip left up there to carry him to the finish.

“We were so successful up there I just hated to move,” Owens said. “I just decided to stay up high. We was getting a good enough run coming off the corner to maybe take care of what we were losing going in.”

Owens felt his car was sufficiently versatile, however, to work in a lower groove, giving him confidence for Saturday night’s $30,000-to-win Firecracker 100.

“I definitely don’t think my car was fading at all,” said Owens, who assured himself a pole starting spot in a Saturday heat race with his first WoO win since Nov. 2, 2012, at The Dirt Track at Charlotte in Concord, N.C. “I think if we would’ve moved over to the middle or the bottom we would’ve been just as good. Maybe not, but I think so. I ran the middle through one and two a couple times and the car felt really good.”

Bloomquist walked away from Friday night’s action feeling positive vibes about his Firecracker 100 chances as well.

“We were good,” said Bloomquist, who will also start from the pole position in a heat race on Saturday night. “The thing that makes me really happy is that tomorrow is a hundred laps and we were getting better. I could run on the bottom, right through that middle where it’s really slick.

“When you’ve got a hundred laps coming the next day, the best thing is not to run into anything and keep the car in good shape. There really ain’t much we want to do to this car. We’ll just get tires on it tomorrow and count on the race being long like it’s gonna be and just let the track come to us.”

Bloomquist would have liked to grab the checkered flag, but he was content with his performance after his last-lap bid fell short.

“I actually pushed it a little bit too hard in three and four and got a little bit loose on the last lap,” Bloomquist said. “But the other laps we were gaining and got into position. He could beat me off the corners early, but that went away.

“I’m not gonna think to hard about that. We’re just gonna wait on tomorrow and see what happens.”

Two caution flags slowed the race. The first came on lap 11 when Mason Zeigler of Chalk Hill, Pa., and Jared Miley of South Park, Pa., tangled in turn one, and on lap 24 Russ King of Bristolville, Ohio, stopped on the backstretch.

Notes: All 23 cars running at the finish were on the lead lap. … Lanigan had a rare off-night, finishing a quiet 11th after starting 18th. It marked the first time he’s finished outside the top 10 in 16 WoO starts this season — and just his second run outside the top five — but he still extended his points lead to 164 points over Rick Eckert of York, Pa., who finished 17th after using a provisional to start the feature. … John Blankenship of Williamson, W.Va., was the race’s biggest mover, advancing from the 22nd starting spot to finish seventh. … Tim Fuller of Watertown, N.Y., battled for a top-five spot for most of the distance but finished sixth. … Mike Marlar of Winfield, Tenn., was in contention for a second consecutive top-five finish when he pulled out of the race on lap 12.