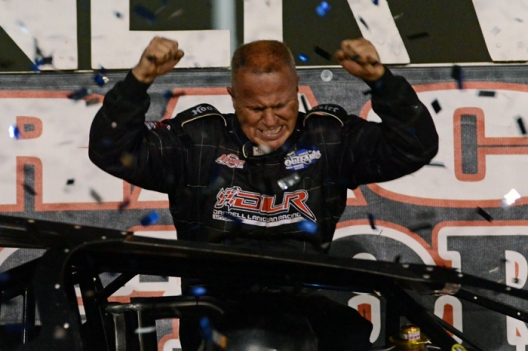 SARVER, Pa. (June 26) — It wasn’t the race Darrell Lanigan wants more than just about any other on his 2014 schedule, but he’ll take it.

Lanigan, 43, of Union, Ky., broke through for his long-awaited first-ever victory at Lernerville Speedway on Thursday night, capturing the 30-lap World of Outlaws Late Model Series A-Main that kicked off the eighth annual Firecracker 100 weekend.

“Saturday is definitely the one we’re shooting for,” Lanigan said, pointing toward the $30,000-to-win Firecracker 100 finale that has been a thorn in his side throughout its existence. “But anytime you get a win it’s good — and I’m definitely glad to get the monkey off my back here. We know we’ve got a good piece now and we’ll take it on to the weekend.”

A runner-up in four of the last six Firecracker 100s, Lanigan started from the pole position in the first of two preliminary features leading into this year’s Saturday-night spectacular. He was outgunned for the top spot at the initial green flag by outside-polesitter Jonathan Davenport of Blairsville, Ga., and lost second to Scott Bloomquist of Mooresburg, Tenn., on a lap-nine restart, but the two-time WoO LMS champion stayed within striking distance of the pacesetters and came on strong after a lap-17 caution flag.

Bloomquist, 50, grabbed the lead from Davenport on lap 19 and brought Lanigan with him. Lanigan then charged underneath Bloomquist exiting turn four to assume command as lap 21 was scored and never looked back in his self-designed Club 29 car.

Lanigan drove away from the pack over the final nine circuits, beating Bloomquist to the finish line by 1.462 seconds for his second straight and sixth overall victory of the season on the WoO LMS. The $6,000 triumph pushed his already comfortable lead in the national tour’s standings to 152 points over Rick Eckert of York, Pa., who finished 10th, and assured him of a pole starting spot in a Firecracker 100 heat race on Saturday night.

Jimmy Owens of Newport, Tenn., making his first appearance at the Firecracker 100 in five years, finished hot on Bloomquist’s rear bumper in third place. The reigning Lucas Oil Late Model Dirt Series champion came on late in the distance, overtaking Davenport for third on lap 27 and chasing Bloomquist to the checkered flag.

Davenport slipped to fourth at the finish after leading laps 1-18, while Mike Marlar of Winfield, Tenn., moved forward from the seventh starting spot complete the top five.

Lanigan felt he earned every penny of his WoO LMS-best 59th career win, which put him over the $100,000 mark in 2014 earnings after just 15 starts. This was no ordinary win from the pole.

“We fell to second there on the (original) start and then Bloomer got that outside on the (lap-nine) restart and got by us,” Lanigan said. “I just never got a good start, but I felt like we had a good enough car to get back by those guys.

“That Davenport was good on top, which I knew he would be. But that top kind of died, so the track came to us. We just kind of got our groove going, found a good spot. We hit our marks pretty good and the car got great, and passed them both.

“Anytime you pass those guys,” he added, “you’ve definitely done some hard driving.”

Lanigan loaded up his machine after Thursday’s action feeling like maybe his day in the Firecracker 100 spotlight might be coming.

“We ran second here so many times, it seemed like we weren’t doing something right,” Lanigan said. “Everything came together tonight and we finally got a win — and we have awesome piece here, so I think we got a good chance for the weekend. I’m sure the track will be different — it’s a hundred laps, so by the end it should be black from top to bottom — but I think we’ll be ready.”

Bloomquist plans to be primed for Saturday night’s headliner as well. He conceded that he didn’t hit the setup of his Sweet-Bloomquist car on the money in the weekend’s opening leg, so he certainly has room for improvement.

“I was just so tight the entire night,” said Bloomquist, who started fourth. “I was actually surprised I even got in the lead. In (turns) one and two, I had to get the car loose on entrance and throttle up to try and keep it loose and I still couldn’t turn down the hill; it just made me drift up more. And if I kept the car straight and tried to do it, it wouldn’t turn at all.

“I just made some decisions before the feature and tightened up, and it was just way too tight. There’s probably a half-dozen things we changed for the feature that I would probably go back the other way on now, and then there’s a few things I’ve done in the past here that I’m gonna dig back out.”

Two caution flags slowed the event. Kent Robinson of Bloomington, Ind., fell off the pace with a broken driveshaft on lap nine and Dan Stone of Thompson, Pa., who debuted a new Leo Milus-owned car, stopped on the backstretch on lap 17.