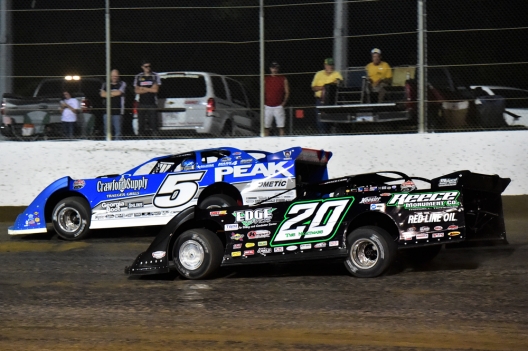 Battling hard for a second big-money, 100-lap Lucas Oil Late Model Dirt Series victory in the last four weeks, the soon-to-be 50-year-old driver from Martinsville, Ind., outdueled Jimmy Owens of Newport, Tenn., to pocket $20,000 for winning the Clash at the Mag sponsored by the Columbus Convention and Visitors Bureau.

O’Neal and Owens — the top two drivers in the 2014 Lucas Oil Series points standings — swapped the lead on four occasions, the last change coming on lap 90 when O’Neal steered his Clint Bowyer Racing Barry Wright Race Car around the outside of Owens’s Mike Reece-owned Club 29 machine to assume command for good.

“We just kept digging, like the Show-Me 100,” said O’Neal, comparing his third Lucas Oil Series triumph of the season to his never-say-die $30,000 crown-jewel score on May 24 at Lucas Oil Speedway in Wheatland, Mo.

Owens, 42, settled for a runner-up finish after starting ninth and leading laps 40-72 and 86-89. Earl Pearson Jr. of Jacksonville, Fla., advanced from the sixth starting spot to place third, ahead of Mooresburg, Tenn.’s Scott Bloomquist and West Monroe, La.’s Timothy Culp, a rising 23-year-old who record a career-best finish in Lucas Oil Series competition.

O’Neal drove forward from the fourth starting spot to grab the lead for the first time on lap 29 from outside polesitter Randy Weaver of Crossville, Tenn., who started on the outside pole and paced the field from the opening lap in his new Longhorn Chassis car. But O’Neal soon was replaced at the front by Owens, who surged ahead on lap 40.

As Owens bid to finish the job that he couldn’t in the Show-Me 100 — he passed O’Neal for the lead on a mid-race restart but ceded it back just a few circuits later — O’Neal searched for a line to make himself faster. O’Neal found it after a lap-71 restart, regaining the top spot on lap 73 and setting off a titanic battle of superstars for the remainder of the distance.

Owens managed to push back into the lead on lap 86, but O’Neal charged around the outside to seize control for good with 10 laps to go. O’Neal took the checkered flag about a half-straightaway ahead of Owens for his second Clash at the Mag victory in the last three years.

“What a race,” said O’Neal, who extended his Lucas Oil Series points lead to 30 points over Owens as he continues his pursuit of a first-ever title on the national tour. “He started to drive off from me there with about 30 to go. I closed the gap on him, and then the caution came out (for the third and final time on lap 71 for John Blankenship of Williamson, W.Va.). I thought I had a shot when that last caution came out.

“We just got to rolling up there (to take the lead using the top groove), and here come Jimmy back on that bottom. My guys were trying to move me down, and I moved down there and he drove around me. So now I just got back out there and (used) momentum and just never gave up.

“You’d be running one line and you’d think, I really got something going on here, and then it seemed like you’d run there for a few laps and it slowed down. Then you had try to search for something else.

“I changed my line for a moment and the car started taking off better,” he added, “and then I was able to run him down.”

Owens came out on the wrong end of another tussle with O’Neal, but he was in good spirits after the race.

“That was pretty exciting,” said Owens. “O’Neal got around me, and I got back by him. We went back-and-forth so many times I lost track after awhile.”

Owens linked his undoing to his uncertainty with the optimum line as he negotiated slower cars.

“Just lapped traffic,” Owens said. “I didn’t know whether to get up off the bottom or stay where I was at. It felt like it was not really rubbered up, but just kind of one-lane dominant toward the bottom. (O’Neal) was able to sneak by us there and get the win, so yah for them.”

Pearson, 42, appeared capable of challenging the leaders late in the distance but didn’t have enough speed left in his Longhorn mount.

“After that last caution I went back green there and I felt a vibration,” Pearson said. “We come to Jimmy there a little bit (after O’Neal passed for the lead on lap 73), but then the tire was going flat and I was just hanging on there at the end.”

Notes: O’Neal won for the second time in three feature starts this season at Magnolia. He also earned $12,500 for a National Dirt Racing League triumph at the track on April 19. … Early leader Weaver, who registered the fastest overall time-trial lap on Friday night, faded to a seventh-place finish. His car's handling was hampered by right-side door damage it sustained in a scrape with a lapped car as he led. … Exactly half of the 24-car field completed all 100 laps. ... Early caution flags were caused by polesitter Eddie Carrier Jr. of Salt Rock, W.Va., who retired on lap 33 and finished 22nd, and Chase Washington of Houlka, Miss. (lap 38). … Time trials and heat races were conducted on Friday; Saturday's card includes a pair of consolation races and the 100-lap, $20,000-to-win feature. ... Mike Marlar of Winfield, Tenn., last year’s Clash at the Mag winner, did not enter to defend his title. … Ashley Newman of Ripley, Tenn., won the companion NeSmith Crate Late Model feature.