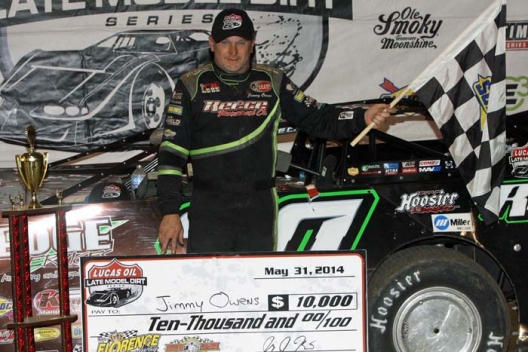 Continuing to put a slow start — by his lofty standards, at least — to the 2014 season behind him, Owens recorded his third win in his last four starts on the Lucas Oil Late Model Dirt Series with a powerful drive in Saturday night’s 50-lap Ralph Latham Memorial at Florence Speedway.

Owens, 42, of Newport, Tenn., overtook race-long pacesetter Duane Chamberlain of Richmond, Ind., for the lead on lap 26 and never looked back en route to a $10,000 triumph. The three-time and defending Lucas Oil Series champion earned his third career Ralph Latham Memorial victory by several car lengths over Darrell Lanigan of Union, Ky., who designed Owens’s winning Club 29 Race Car and lives just down the road from the half-mile oval.

The race marked the second time this season that Owens and Lanigan, who celebrates his 44th birthday on June 3, swept the top two spots at Florence. Lanigan won the Spring 50 over Owens on April 19.

“It’s good to come home one-two again,” said Owens, who made the move to Lanigan’s new Club 29 machines earlier this year. “I like it a lot better this way.

“It’s been great working with Darrell on these cars,” he continued. “He builds a nice car. The maneuverability is just tremendous.”

Don O’Neal of Martinsville, Ind., finished third in his Clint Bowyer Racing Barry Wright Race Car to maintain his Lucas Oil Series points lead — but not by much. His edge shrunk to just 10 points over the streaking Owens.

Scott Bloomquist of Mooresburg, Tenn., finished fourth — moving to third in the points standings despite missing an early-season race — and John Blankenship of Williamson, W.Va., advanced from the 17th starting spot to fifth to record his fourth top-five finish of the 2014 Lucas Oil Series.

Owens completed a sweep of the Lucas Oil Series weekend, backing up his score in the previous night’s 50-lapper at Tazewell (Tenn.) Speedway. He pushed his career win total on the national tour to 47, just one behind alltime leader Bloomquist.

“What a weekend we have had,” said Owens, who was winless on the ’14 Lucas Oil circuit until breaking through on May 17 at La Salle (Ill.) Speedway. “Winning at Tazewell last night and here tonight, it’s been just awesome.”

Owens used primarily the bottom groove to run down and pass Chamberlain, the 35-year-old driver who was bidding for the biggest win of his career. Chamberlain, who set fast time in the evening’s qualifying session, started second and broke into the lead at the initial green flag.

“The car was just rolling,” said Owens, who hasn’t finished outside the top five in a Lucas Oil event since March 22 (a span of eight races). “I was thankful they went out and re-did the bottom of the racetrack. Starting seventh, I felt a little bit better at my chances.

“(Chamberlain) was running the top and I decided I could run the low line better during the mid-part of the race. Once I got by him, I moved back to the top. Last week we moved to the bottom and it kind of bit us.”

Chamberlain, who entered the event having won seven of his last eight races locally — including two at Florence — lost second to O’Neal shortly after Owens made his deciding pass. His hopes ended altogether on lap 39 when he spun and was collected by Nick Latham of Winchester, Ohio.

O’Neal, 50, held the runner-up spot until the 12th-starting Lanigan grabbed the position on lap 40. Lanigan was unable to make a serious run at Owens, however.

“Congrats to Jimmy on the win,” said Lanigan, the World of Outlaws Late Model Series points leader who hasn’t finished worse than fourth in his last 10 starts overall since mid-April. “We just started too far back, but when they worked on the track, that helped a lot.

“It’s good to come here close to home and run well. Our program has been really good this year. Building these cars with Ronnie Stuckey has really kept us at the shop busy over the last year. Hopefully the wins will keep coming and we can have a great year.”

“We always seem to be near the front here at Florence,” said O’Neal, who started third. “Our car was good tonight; we were just a little bit off. Jimmy has gained a lot of ground on us in the last few weeks, so we need to start getting some more wins.”

Notes: Owens and O'Neal combined have won every Lucas Oil Series event at Florence since June 2010. ... Four cautions slowed the feature, including the lap-39 yellow following Chamberlain’s problem. ... Other cautions were caused by a tandem spin by Dustin Linville of Lancaster, Ky., and Ray Cook of Brasstown, N.C. (lap 17); Justin Rattliff of Campbellsville, Ky. (slowed on lap 13); and Scott James of Bright, Ind. (flat tire on lap 47). ... Cook had to start on the tail instead of sixth because he had the wrong compound tire on the right front. He was able to get back on the track without losing a lap thanks to an opening-lap caution flag for O’Neal and Owens, who were left tangled up between turns one and two; both drivers were allowed to restart in their original positions because they were involved in a multi-car incident without a lap being completed. ... Latham, the 22-year-old grandson of Ralph Latham, made the race for the first time. ... Earl Pearson Jr. of Jacksonville, Fla., got into the wall early in the third heat while running second, causing major rear-end damage and collecting Jason Hughes of Watts, Okla. Both started the feature with provisionals. ... Steve Casebolt of Richmond, Ind., tangled with Jared Landers of Batesville, Ark., in his heat, then with Michael Chilton of Salvisa, Ky., in a consolation race before calling it a night. ... Besides Casebolt, among drivers failing to make the feature lineup: James Rice, Terry Lanigan, Eric Wells, Ethan Burgess, Robby Hensley, Brad Neat, Dustin Neat and Florence points leader Steve Landrum.