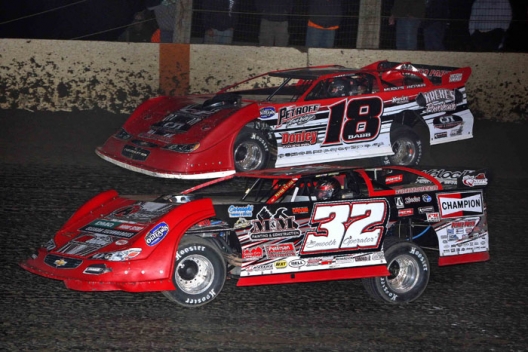 The 40-year-old star from Moweaqua, Ill., was strong to the finish on Saturday night, capturing the World of Outlaws Late Model Series Illini 100 at Farmer City Raceway to become the first home-state winner in the event’s seven runnings.

“This race means a lot. There’s no better crowd in the Midwest than right here. Every year they keep supporting it, and we’ve got a lot of good race fans and race teams around here. I love to win it right here at home.”

Making his sixth start of the 2014 season in his new Rocket Chassis machine, Babb started seventh but quickly hustled forward on the quarter-mile bullring to run third. He made his decisive move on a lap-45 restart, surging around the outside of both Darrell Lanigan of Union, Ky., and pacesetter Bobby Pierce of Oakwood, Ill., to assume command for good.

Babb became the eighth different winner in as many races on this year’s WoO tour across America, beating Lanigan to the finish line by 0.419 of a second. Pierce settled for third place after leading laps 3-45, with Tim McCreadie of Watertown, N.Y., registering a solid — and badly needed — fourth-place finish and Rick Eckert of York, Pa., placing fifth after starting from the outside pole and leading laps 1-2 in his first start behind the wheel of the Rocket Chassis house car.

A heartbroken runner-up twice previously in the Illini 100 — both times (2008 and ’10) to his racing mentor, Billy Moyer of Batesville, Ark., who also won the event in 2013 but did not enter this year’s edition — Babb was determined to not let the race slip through his fingers again. When a caution flag flew for debris on lap 45, he flexed the muscle that would make his Farmer City dream finally come true.

With second-place Lanigan opting to take the inside lane for the Delaware double-file restart that leaves the leader alone on the front row, Babb knew he had his opportunity to burst ahead.

“When Darrell chose the bottom and I had the top, my mouth was watering,” said Babb. “I knew those guys were chasing that bottom and I’d been running the top. That groove’s been there for a hundred years and it always suited me fine, so we was able to take over. I just got up there and got ‘er done.”

With the track surface taking rubber late in the distance, Babb just had to avoid making a critical mistake — or being struck by bad luck — to reach the checkered flag first. He was slowed slightly by a leaking right-rear tire but handled a final restart on lap 88 to outrun Lanigan to the finish line.

“That’s one of the funnest races I’ve run in a long time,” said Babb, who recorded his 12th career WoO triumph (and second at Farmer City, joining a 50-lap win in 2007). “The car was good from the start and it was just fun to drive.”

Lanigan, 43, padded his WoO points lead with his $10,650 runner-up outing, but the ultra-competitive driver wasn’t smiling much after the race. He felt his decision to restart from the inside lane on lap 45 might have cost him the race.

“We had a good piece, starting eighth and coming up to second right off the bat,” said Lanigan, whose lead in the WoO standings stretched to 52 points over 10th-place finisher Brandon Sheppard of New Berlin, Ill. “We just messed up there on the restart. It was my own fault we run second.

“It was a good night. I’m just kind of pissed at myself.”

The 17-year-old Pierce, who was bidding for his sixth win in his last seven starts in the Midwest, vaulted from the fourth starting spot to the lead by lap three and held the position for nearly half the distance. But the teenage sensation was helpless to stop Babb’s lap-45 restart explosion and lost second to Lanigan shortly thereafter.

“It’s good to lead a couple laps,” said Pierce, who matched his career-best WoO finish. “Unfortunately, we couldn’t hang on long enough to when the rubber started coming.

“We didn’t really expect it to rubber up, but it did. I think we just over-tightened a little bit too much and getting into (turn) three there I couldn’t make it turn unless I slid it getting in.”

Only four caution flags slowed the event, which took just over 36 minutes to run.

The first yellow flag came on the sixth lap as Steve Sheppard Jr. of New Berlin, Ill., and Jeep VanWormer of Pinconning, Mich., both spun in turn one. Following the lap-45 caution for debris, subsequent slowdowns came on lap 50 when Chase Junghans of Manhattan, Kan., slowed in turn three with a flat tire and on lap 88 when Clint Smith of Senoia, Ga., fell off the pace with a right-rear flat while running in the top 10.

Notes: Babb’s last WoO victory came on July 27, 2013, also in a $20,000-to-win race in his home state: the 100-lap Prairie Dirt Classic at Fairbury (Ill.) American Legion Speedway. … Lanigan, who earned his second WoO fast-time honor of 2014 on Friday night, also finished second in the 2012 Illini 100, chasing Jimmy Mars of Menomonie, Wis., to the checkered flag. … Jason Feger of Bloomington, Ill., advanced from the 14th starting spot to finish sixth, one year after he had an apparent history-making victory in the Illini 100 overturned due to a failed tire test. Feger’s disqualification allowed Babb to go down in the record book as the race’s first winner from the Land of Lincoln. … Frank Heckenast Jr. of Orland Park, Ill., was the highest-finishing WoO rookie, placing ninth. … Six of the top 10 finishers hail from Illinois. … Derek Chandler of Pontiac, Ill., had a flat right-rear tire on the last lap of a consolation race while holding a transfer spot. ... Officials hurried the feature to the track with a fear of wet weather moving in. Temperatures dropped significantly and the wind picked up as the sun was setting. … The WoO LMS will be back in action May 2-3 at Fayetteville (N.C.) Motor Speedway and Lavonia (Ga.) Speedway.