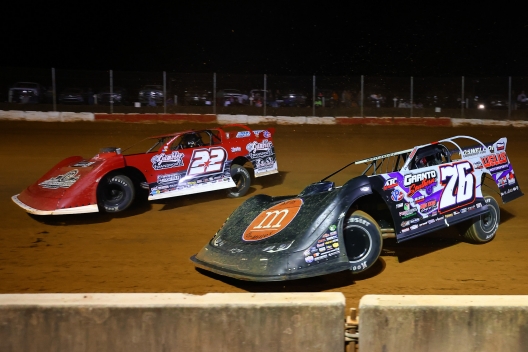 LOXLEY, Ala. — When Payton Freeman inherited the lead on lap 26 of Sunday’s 50-lap Hunt the Front Southern Showcase presented by Sweet Victory, he was still overly concerned about one opposition.

“I knew when I got the lead there (Brandon Overton) would go and put a fresh tire on, and he’d be coming,” Freeman said of the Evans, Ga., driver’s anticipated charge back to the front after relinquishing the lead during the race’s ninth caution period due to a flat right-rear.

Sure enough, by the time Freeman needed to regroup one final time for a green-white-checkered finish, Overton had rallied from outside the top-10 and back to the runner-up spot. Freeman, on the other hand, hunkered down and rose to the occasion, outlasting one the sport’s best to secure the richest victory of his career to date at $22,000.

Overton crossed the checkers 1.028 seconds behind the Commerce, Ga., driver who also picked up his first victory with car owner G.R. Smith at Team 22 Inc.

“It didn’t surprise me at all when I seen his number up there on the scoreboard,” Freeman, 20, said of Overton’s rebound. “Man, I have many emotions going right now. I just watched my guys in the infield. I got to ride behind Brandon a little while there in the race earlier, so I got to see where he was attacking; what he could do.

“I knew he was going to try and roll me around the outside. I knew if I hit the bottom and hit my marks, it’d be really hard for him to get me. But, man props to him. He beat me on the start there and I hate he had bad luck there. I guess it’s better to be lucky than good. We’ve had a really fast Longhorn race car. Just thanks to G.R. Smith. This is awesome.”

Sunday's Southern Showcase, which hosted Late Models at Deep South for the first time since a Crate Racin' USA event in Nov. 2020, had been — what stick and ball enthusiasts often say — a tale of two halves.

Third-starting Joseph Joiner led the opening 25 laps that were fragmented by nine cautions. All told, the first half of the event postponed from Saturday because of rainy weather took 49 minutes to complete.

Among those myriad of cautions were back-to-back pileups on lap seven that involved Rusty Schlenk, Manny Falcon, Monte Skinner, Shay Miller, Jesse Enterkin and Bo Slay, as well as another four-car pileup on lap 12 for Billy Franklin, Steven Jernigan, Dewayne Kiefer and Skinner and Kiefer. But no yellow flag applied more implications on the 50-lap event than the caution period on lap 26, when Joiner — race-long leader — slowed off turn four.

Overton ran down and passed Joiner under green before the stoppage, but the Evans, Ga., wheelman ultimately didn’t pace the field for long as he, as previously mentioned, needed to pit for a fresh right-rear tire.

Restarting outside the top-10, Overton — gunning for a third win in his last 10 starts — still felt confident he could overcome the suboptimal circumstances because he made the middle of the racetrack work to his liking. Most drivers on Sunday — Freeman included — committed to the very bottom of the 3/8-mile.

“We had a really good car. As long as I stayed out of the wrecks, I thought I was going to be OK,” Overton said. “Came up a little too short. This is crazy, just the way the dirt is. When the black comes, it’s actually the most grip on the racetrack. The bottom is just a little too fast and, hell I drove it as hard as I could the last 10 laps. That’s all I had. Hopefully the fans enjoyed it.”

“It’s kind of a little too late now, but our car has been really good the last couple nights,” added Overton, who gave the impression that Sunday would be his final race of the 2022 season. "Yeah, we’re looking forward to next year.”

Whereas the first half of the race slogged along, the second half unfolded at a smoother pace — 14 minutes to complete the final 25 laps, to be exact — and Freeman did what he had to do to take care of business.

“It’s awesome. There’s probably two, three, four, or five of the best cars down here,” Freeman said. “We want to come down here and race with them. The last few races we ran the past three weeks, obviously we weren’t where we needed to be, or wanted to be according to our expectations.

“As I said the other night, these group of guys here this weekend believe in me. We all believe in each other with what we’re trying to accomplish. We didn’t quit. We put our work shoes on and went to work. As I said, it paid off. We got this Longhorn Chassis rolling pretty good."

Spencer Hughes of Meridian, Miss., meanwhile, bottles consistency heading into the winter that could very well carryover into the new year. Hughes’s third-place run from the 10th-starting spot on Sunday marked his fifth top-five finish over a six-race span that also features a $12,000 victory and four podium finishes

“It wasn’t too bad. We had an OK car there,” Hughes said. “I kind of got boxed in with lapped traffic there and couldn’t close the gap. All in all, at least we came out of here with a fifth and a third. Be ready to get back home, get everything cleaned up, and we’ll get ready for Speedweeks.”