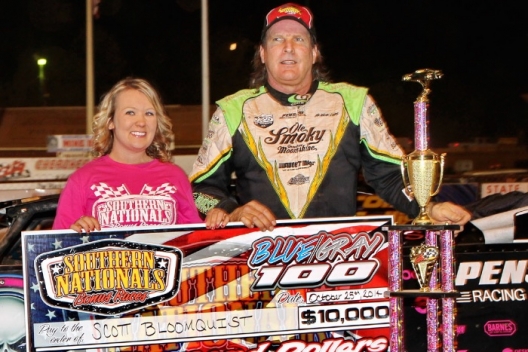 Continuing his epic run of autumn dominance, Scott Bloomquist of Mooresburg, Tenn., invaded Cherokee Speedway and drove to a $10,000 victory in Saturday night’s 24th annual Blue-Gray 100 that was part of the Southern Nationals Bonus Series.

Bloomquist, 50, was outgunned for the lead at the start of the event by outside polesitter Dustin Mitchell of Pine Level, N.C., but the Dirt Late Model Hall of Famer disposed of Mitchell for the top spot on lap 11 and never looked back. He repelled some late-race pressure from Jonathan Davenport of Blairsville, Ga., to secure his fourth career triumph in the Blue-Gray 100 but first in nearly two decades.

“We always used to run good here,” Bloomquist said of the oval that was shortened several years ago. “We kind of struggled a little bit, but we’ve got our new (Sweet-Bloomquist) cars running good.”

That’s an understatement. Bloomquist is on a roll for the ages, winning a five-figure race for the fourth consecutive weekend and seventh in the last nine dating back to the Labor Day holiday weekend. His stretch of success includes crown-jewel victories in the World 100 and Dirt Track World Championship and has been worth $187,000, including $90,000 in earnings in October alone.

Bloomquist maintained firm control once in command at Cherokee, keeping his distance from Davenport on open track and negotiating slower cars well enough to prevent his 31-year-old challenger from pulling off any dramatics in the final circuits.

“In lapped traffic, (turns) three and four were pretty good to us,” said Bloomquist, whose previous Blue-Gray 100 wins came in 1992, ’94 and ’96. “We could really charge the high line and the car stuck really good. We were a little bit loose going into one … (the track was) just a little bit broken up going into one and coming out of two, but overall the track held up great.”

Davenport, who won the Blue-Gray 100 in 2011 and captured Cherokee’s March Madness event earlier this year, started third and slid past Mitchell for second place soon after Bloomquist gained command. But the driver of the K&L Rumley Longhorn machine couldn’t find a way to improve one more position and settled for runner-up money, about a half-straightaway behind Bloomquist at the checkered flag.

“Once you get to lapped traffic we could close in pretty quick (on Bloomquist),” said Davenport. “It’s just that clean air means a whole lot here, especially on these hard tires and (with) just that little bit of grit across the racetrack.

“He done a good job through lapped traffic … we couldn’t quite get there. I’d say if the roles were switched, we started on the pole and he started third, we’d probably be getting our picture made (in victory lane).”

Casey Roberts of Toccoa, Ga., finished third, also in a Longhorn Race Car. Backing up his third-place run in Friday night’s Southern Nationals Bonus Series preliminary feature at Cherokee, he was the only driver to record a podium finish in both ends of the track’s doubleheader.

“We had an awesome car all weekend,” Roberts said.

Roberts felt fortunate that he was able to show his Cushman Motorsports team’s wares at Cherokee, however. The day before leaving for Cherokee he experienced a scary fire situation at the team’s shop.

“This car actually caught on fire on Thursday and we were worried about burning the whole place down but the good Lord was looking down on us,” Roberts said. “We’re just counting our blessings tonight.”

Notes: Caution circuits were counted during the first 80 laps of the 100-lapper. ... A lap-20 yellow for Anthony Sanders of Spartanburg, S.C., halted the action. ... G.R. Smith of Huntersville, N.C., slowed to draw cautions on laps 45 and 76. ... Chris Ferguson of Mount Holly, N.C., who won Friday's $7,000-to-win Robert Pursley Memorial at Cherokee, retired near halfway after showing heavy smoke. ... Austin Hubbard of Seaford, Del., slowed on lap 58. ... Bloomquist was involved in some controversy during qualifying when he and hometown standout Dennis Franklin of Gaffney, S.C., collided on the first lap of the first heat, sending Franklin into the wall. An unhappy Franklin flung his steering wheel at the hood of Bloomquist’s car after the incident and was disqualified for the night by series officials. ... John Ruggiero Jr. of Harrisburg, N.C., rallied from 11th to win the Crate Late Model feature.