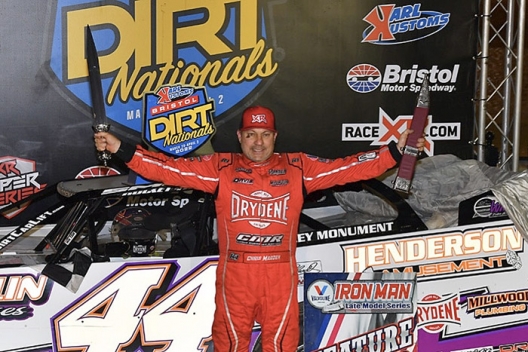 BRISTOL, Tenn. — When Chris Madden climbed out of his car in Bristol Motor Speedway’s victory lane, the smile on his face told the story of how much fun he had cruising to a dominant $50,000 triumph in Friday’s 50-lap Super Late Model opener of the Karl Kustoms Bristol Dirt Nationals.

The 46-year-old star from Gray Court, S.C., was absolutely amazed by the performance of his Durham-powered XR1 Rocket machine.

“I don’t know what to say,” Madden said. “That there was awesome. We could run top, bottom, middle … it didn’t matter.”

Indeed, Madden was in a league of his own throughout the feature, the first of four $50,000-to-win Super Late Model events over two weekends at the high-banked, dirt-covered half-mile oval to kick off the inaugural XR Super Series. He bolted off the pole position to assume command at the initial green flag and never looked back.

Building an advantage of as much as 7 seconds in a race that ran caution-free after a lap-one incident, Madden was never challenged en route to beating Dale McDowell of Chickmauga, Ga., by a more modest margin of 1.805 seconds and lapping up to ninth-place Earl Pearson Jr. of Jacksonville, Fla.

Brandon Overton of Evans, Ga., who started 12th and briefly climbed as high as second on lap 23, ceded the spot back to McDowell two circuits later and settled for a third-place finish. Jonathan Davenport of Blairsville, Ga., who won last year’s $50,000 Bristol Dirt Nationals headliner, charged from the 21st starting spot to place fourth and 16th-starter Mike Marlar of Winfield, Tenn., finished fifth after cracking the top five with a lap-48 pass of Headingley, Manitoba’s Ricky Weiss.

Madden flawless performance helped him calm down after he spent most of Friday on edge. Opting to give up the World of Outlaws Case Late Model Series points lead — and bypass the weekend’s WoO show at his home track of Cherokee Speedway in Gaffney, S.C. — to chase the big money offered at Bristol, the pressure was on him to produce.

“My wife and kid (son) Avery just got here after the heat race, and I told her, ‘My adrenaline’s been going today harder than normal,’” Madden remarked. “I’ve been a little nervous here-and-there and I normally don’t get that way.”

Madden made his decision to forego a WoO championship bid pay off handsomely, winning more money in one night than he could have by sweeping the WoO doubleheader at Cherokee. And he still has another quarter-million dollars to chase over three more nights of the Bristol Dirt Nationals, including $50,000-to-win races on Saturday and April 1-2 and a points fund for the four races that’s topped by a $100,000 check.

“We got a great race car right now,” said Madden, who registered his third win in his last four starts since he ended Georgia-Florida Speedweeks with a WoO victory on Feb. 19 at Volusia Speedway Park in Barberville, Fla. “We’ll just keep plugging away here and doing what we know to do best. If we win, we keep getting ‘em. But the main thing is just stay steady and just keep this thing up front.”

The only uncertainty in Madden’s mind during his march to the checkered flag was his tire choice, which was softer than many of his rivals.

“Before we went out, me and J.D. (Davenport) and them guys had talked, and we felt like three hard tires were gonna be the way to go,” Madden said. “I was on the pole and I didn’t have that option, so I had to go with what I had to go with (softer rubber to fire fast). But my race car was really balanced tonight, it was really good, so I don’t think the tire combination hurt me that bad.”

McDowell, 55, had his Team Zero car shod with harder rubber than Madden, which led him to wonder whether he might have been able to mount a challenge if a caution flag had flown late in the distance.

“I think so possibly,” said McDowell, who started fifth. “I mean, you never know because his tires could’ve cooled off a little bit. I think he was softer on the left-rear than we were.

“I don't think it’s a secret. You can change two tires (under event rules), so everybody was kind of doing different things throughout the day to figure out which two they wanted to change, so obviously it worked out for Chris. But you know, I think if he’d have started back a little bit further (back) and didn’t have control of the race then he’d have worked his tire a little bit harder, you know, and it might not have been the same outcome. But it is what it has been you know. He chose the path to go and made it work.”

The key moment in McDowell’s $25,000 runner-up outing came at the halfway point when he regained second from the 30-year-old Overton, who slipped by both McDowell and Weiss two laps earlier.

“Actually my brother told me, Shane told me, that Chris had been rolling around the top and Brandon started back far enough that he could search and go wherever they weren’t,” McDowell said. “So when (Overton) went by me on the outside, I thought, Man, he’s gonna be gone. And then we got in some more lapped cars and it dirtied the air up enough to where I got back by him. I think it was just circumstantial.”

Overton made a strong advance forward but noted afterward that he struggled to find the prime line around the blazing-fast track.

“When (cars) were in my way I couldn’t carry enough speed to run on the top, so if I’d get in there and check up. ... you’re going so fast,” Overton said. “I seen Dale under me one time, and I was like, ‘Man, I need to get down and try to slide him, but I’m not gonna wreck because, like, we’ve got a couple more days left.’

“But anyway, yeah, (McDowell) got by me and I watched him kind of leave in the bottom, so I moved down and it was kind of clean down there. So I didn’t move back up till probably five or six (laps) to go and I could tell I’d wasted probably eight laps. But it gives you a false feeling when you’re behind him. Like (McDowell) said, because the dirty air. ... when they all went back by me in the bottom and I was fighting somebody else off, too, until I got back down, but you don’t want to go back up there after you know he just drove by in the bottom. But once I did get back up (higher) I felt a lot better. I just kind of kind of got lost there for a minute.”

The race’s only slowdown came on lap one when Michael Chilton and Jensen Ford were involved in turn-one tangle. Chilton’s car was left heavily damaged with its right-rear wheel and suspension ripped off while Ford’s machine was towed off with significant rearend damage.

Notes: Madden recorded his fourth career win worth $50,000 or more, following 2019 triumphs in the USA Nationals and North-South 100 and last year’s Peach State Classic at Senoia (Ga.) Raceway. … Jonathan Davenport had to charge from deep in a B-main to transfer after he was involved in a scrape with Shane Clanton on the first lap of their heat. … Vic Hill saw his night — and likely the rest of his Bristol Dirt Nationals — end after an opening-lap heat-race tangle with Ashton Winger sent him spinning backward into the inside wall on the homestretch. Hill was critical of Winger, who continued on to transfer in the prelim; Winger’s car owner G.R. Smith, meanwhile, had to be separated from Hill in the infield after the race. … Feature provisionals went to Kyle Strickler (fast time) and Christian Hanger (Iron-Man Series). … Wil Herrington was in line for a provisional but turned it down after experiencing engine trouble in his heat. … Garrett Smith crossed the finish line first in the second B-main was docked two spots because officials said his spoiler was laid back too far.