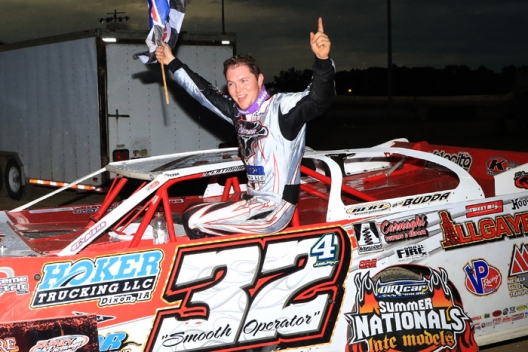 “Last night, when my parents left the track (Illinois’s Highland Speedway), me and the guys were still fixing the deck, putting it back together,” Pierce said. “My parents were like, ‘Let’s go home.’ My crew guys were like, ‘Whatever.’”

So it was that Pierce, 23, of Oakwood, Ill., made the trip across the Mississippi River to the high-banked, half-mile oval with his race car hauler — and his parents did the same with their camper and Pierce’s merchandise trailer — and the result was a morale-boosting victory for the three-time Hell Tour champion. He led all 26 circuits of a feature that was shortened from its scheduled 40-lap distance by rain.

After light rain that began falling early in the A-main intensified as the race reached its halfway point, DIRTcar officials told drivers by one-way radio during a lap-21 caution period that the checkered flag would be thrown in five laps. Pierce then beat Frank Heckenast Jr. of Frankfurt, Ill., to the finish line by 1.082 seconds to claim the $5,000 top prize and his second triumph of the 2020 Summer Nationals.

Series points leader and defending champion Brian Shirley of Chatham, Ill., finished third after picking up one spot at the initial green flag and holding the final podium position for the entire distance. Jason Feger of Bloomington, Ill., placed fourth after swapping the spot over the final five circuits with Rusty Griffaw of Festus, Mo., who finished fifth.

Pierce’s win in the first-ever Summer Nationals race at Randolph County snapped him completely out of a rough patch during the first phase of the grueling series. He followed his July 10 victory at Tri-City Speedway in Granite City, Ill., with five winless outings that included four straight starts finishing in positions 6-10 before he recorded a runner-up placing in Saturday’s stop at Highland.

“There was a four-race stretch there where we had flat tires, I thought we had flat tires … just everything was going wrong,” Pierce said. “We struggled a little bit, but now we’re back at it. I knew eventually it would turn around because we’ve been fast. Every single place we go, we’ve been pretty fast.”

Driving a Pierce Race Car built by his crew-chief father Bob, Pierce shot off the outside pole to assume command over the polesitting Heckenast when the feature began and never looked back as he consistently maintained a short-but-comfortable edge.

“I think the start definitely won me the race,” Pierce commented. “I think Frankie spun the tires a little bit and I got a good jump on him, and that was kind of that.”

Sprinkles of rain began to fall about 10 laps into the feature and became increasingly heavier, prompting Pierce to attempt signaling DIRTcar officials about the situation by sticking his arm out his car’s window while passing the start-finish line.

“I think I was probably the only one who was like, ‘Let’s finish this race (early),’” said Pierce, whose 27th career Summer Nationals victory pulled him back into a tie with Shirley for fifth on the series's alltime win list. “Like 15 laps in I started seeing water on my shield, and then we kept going until that caution came out (on lap 21). I figured we were past halfway, and so I was like … not just because I’m in the lead — I mean, sure, I want the race to be over, but this is a really fast track and I’ve seen what happens when it’s a light shower and then all of a sudden it gushes and you junk so many cars. Here, that could be a bad deal.

“I just wasn’t wanting that to happen, so I was kind of complaining, like, ‘Let’s just finish this race.’ Then (officials) talked on the Raceceiver (radio) and they said, ‘We’re just gonna five more laps, and if it stops raining we’ll keep going.’ But it kept raining, so they threw the checker.

“Honestly, a rain like this has kind of happened to me in a day race at Eldora (Speedway in Rossburg, Ohio) one time. And even the slick spots, you’d think (the light rain) would make it slicker, but it makes it tacky … until, like I said, (the precipitation) gets heavy, and you don’t know when that heavy rain is gonna hit.”

Pierce said the rain didn’t fall hard enough following the final restart to slow him, but he was glad the race was called official before the surface could get doused by a stronger shower.

“It actually made it really tacky for those last five laps,” Pierce said of the rain. “I was able to drive in pretty hard and really mash it off the corners. I think I picked up a little bit of speed because you’d go right through the middle and go.

“Towards the very end my (helmet) shield was getting some rain on it — like a lot of rain — and I had just a tearoff left. Once you get past that it’s kind of hard to just wipe the rain because it gets muddy and dusty and it just smears, so it’s good they ended it early.”

Heckenast, 32, remarked that he wasn’t really aware of the falling rain until he noticed Pierce trying to signal the officials.

“I don’t even know what lap it was, but Bobby put his hand out at the finish line,” Heckenast said. “I thought at first he was blowing up for awhile because when you’re racing behind guys you don’t know if (moisture is) coming from rain or them blowing up or overheating or whatever.

“I wish we would have had 40 laps, but we couldn’t have anyway so I was good with cutting it short,” he added. “You don’t want nobody to wreck.”

The runner-up finish was Heckenast’s best in eight Summer Nationals events, besting his third-place run on Friday night at Farmer City (Ill.) Raceway. He was certainly satisfied with his performance.

“(Pierce) was really good on the top in the beginning, and I was trying to run as hard as I could but not kill myself either,” Heckenast said. “Then after that caution came out (on lap 21) and we went back green I thought, Well, we might have a shot at it here. He didn’t really walk away from us or nothing. He just started in the right spot on the outside. The outside was so good on the start.

“The only thing I’m upset about is at those points in the race I didn’t have nothing to lose I wish I would’ve tried to diamond (the corners) or something. I tried to hit the bottom in one and two a couple times and I couldn’t really gain on him, but I wish I would’ve tried some stupid lines, a (Mike) Marlar-type deal, try to make something happen.

“I knew Shirley had a 30 (compound tire) on and we (himself and Pierce) both had 40s so I knew he was probably gonna die the longer we went, so I kind of wished I had moved around a little bit. But it was still a decent night even though it was crazy how it happened. It put (DIRTcar director) Sam (Driggers) in a tough spot with the rain.

“To be honest, I was a little bit nervous being second and the first one going into the corner behind Bobby,” he added, referring to the final restart. “It was pretty wet, and when I went down the front straightaway and went into the first corner I shoved a little bit because it was greasy from the rain and I was like, ‘Oh my God.’ Then Bobby just kind of let it hang out, and then when he did, I did. It was kind of like one of them deals where you gotta man up and just do it, but pretty much everyone has good respect so I knew Squirrel (Shirley) wasn’t gonna go in there and try to do something stupid either. Everybody just wanted to get the race over with and get home.”

The 39-year-old Shirley said the rain was more of a problem with visibility than traction, but he nonetheless considered the race’s early termination a good decision.

“Before that last caution I was looking over to see if I was spraying water,” said Shirley, who ran his Bob Cullen-owned car hard in searching unsuccessfully for a way around Heckenast. “I was like, ‘What in the hell? Where is all this water coming from?’

“She’d been raining for a minute … just in your face. It really wasn’t really that bad. We ran them last five laps and they said they were gonna call it, and it was fair. It was better than coming back.”

Among the race’s early retirees was Dylan Hoover of Columbia, Mo., who was running fifth when he slowed and pulled off the track with mechanical trouble on lap 15, and brothers Gordy and Trevor Gundaker of St. Charles, Mo.

Before the lap-21 caution flag, the feature was also slowed on laps seven and 10.

The 40-lap Late Model feature was scheduled to run last on the program, but radar indicating rain drawing close to the track from the south prompted officials to hastily change the schedule and send the Late Model headliner out first. The field was called to staging at 7:35 p.m. CT. … Frank Heckenast Jr. and Bobby Pierce share the front row for the start of the A-main five days after their controversial scrape during the feature at Plymouth (Ind.) Speedway. ... Sunday’s 14-car field is the smallest turnout for a Summer Nationals event since 15 cars entered the 2014 stop at Terre Haute (Ind.) Action Track. The lowest car counts over the past three Hell Tour seasons were 21 in 2019 (Quincy Raceway), 18 in ’18 (Lincoln Speedway) and 22 in ’17 (Plymouth, Ind., and Danville, Ill.). … Among the Randolph County entrants is 11-year-old Kayden Clatt of Brashear, Mo., who is running his Crate Late Model in his first-ever Summer Nationals event.