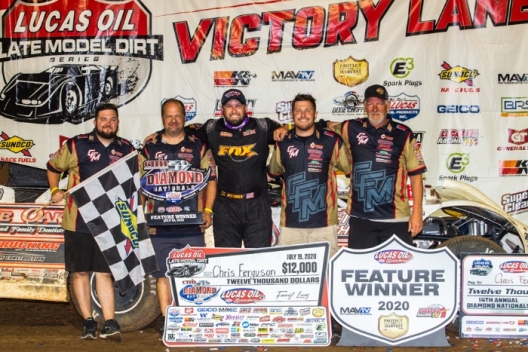 WHEATLAND, Mo. — Making a 900-mile trip to debut at one of American’s finest dirt tracks is exciting. To be standing in victory lane is another thing altogether.

Ferguson’s crossunder move on lap 42 preserved his lead over Davenport, then he barely held off Davenport’s last-lap charge to win by 0.086 seconds at the 3/8-mile showplace.

“I’m telling you, God is great. I can’t believe we’re here. I have so many people to thank. You know, if it wasn’t for my sponsors, I wouldn’t even be here right now,” the 30-year-old Ferguson said in victory lane. “This is something I’ve dreamed of for a long time, to come out here and win at a racetrack like this, and do it like this. It’s just awesome.”

The ninth-starting Davenport, of Blairsville, Ga., settled for second while Shane Clanton of Zebulon, Ga., gave Southeastern drivers a podium sweep. Rick Eckert of York, Pa., was third in Texan Allen Murray’s car while Shanon Buckingham of Morristown, Tenn., was fifth and joined Ferguson as the only driver to post top-fives in Saturday’s Show-Me 100 and Sunday’s 50-lapper.

Two drivers who ran up front fell from contention. Series points leader Jimmy Owens pitted on lap 29 to replace a deflating right-front tire, knocking him out of the second position, then slowed with right-front damage for another yellow on lap 39. Hall of Famer Billy Moyer of Batesville, Ark., slipped by Ferguson briefly to lead the ninth lap, but after slipping back to fifth, he stopped exiting turn two to draw a lap-18 caution and was towed to the pits.

Ferguson stayed in control most of the way, but he had his hands full when Davenport turned up the wick in the second half of the race.

“Man, that was, that groove started moving around. We was on the bottom the first half, then my brother, he gave me the ’ring the top’ (signal). I could see Jonathan on the big screen there going into (turn) three, and he was floating a little bit better than I was,” said Ferguson, who finished fourth a night earlier. “Man, that was a hard race. Hat’s off to Jonathan, man, he’s the best in the country, and to race door-to-door with him for a win is a dream come true.”

Davenport got alongside Ferguson with nine laps remaining, moving past him on the backstretch and into turns three and four. But when Davenport’s No. 49 go too high in turn four, Ferguson turned under him and nosed back ahead at the stripe.

“Me and Chris put on a heckuva show there … all the gloves were off, but we raced each other clean,” Davenport said. “I gave him room when I tried to slide him over here getting into (turn) one the first time he comeback on the outside. We hit going down the back straightaway, and as soon as I turned in, I bottomed out, so I actually turned in, I didn’t get to slide across there — I kind of pushed across the racetrack. That led me up there too deep in the cushion, and I couldn’t get back off of it.”

The runner-up said he was sizing up Ferguson earlier, but a yellow flag ruined his plans.

“I didn’t want to see that one caution when I got to second there,” Davenport added. “I think I had him moving around, and he went to the bottom one time and I was ringing the top, and I think I was going to have him passed right there.”

Clanton, who started seventh, broke into the top five by the 20th lap and briefly grabbed second on lap-29 restart.

“We bided our time there early in the race, just trying to ride there a little bit and not hurt our tires,” he said. “We seen 20 (laps) to go, and it was time to go, so we went as hard we could. The top there was better and I got almost to the quarterpanel of (Ferguson) there, and I guess I showed Davenport where he needed to be. He was a little bit better than we was on the top.

“Overall, we had a good night. First time here in Wheatland, Mo., to come out with third place, it feels pretty good.”

Besides the cautions for Owens and Moyer, a lap-12 yellow appeared for a slowing Earl Pearson Jr. and Tanner English ended up in the infield with nosepiece damage to draw a lap-29 yellow flag.

The caution that drew the most damage came on the ensuing restart when a turn-two scramble that involved Davenport sent Chad Simpson’s car darting across the backstretch and into Will Vaught’s car, which collected Jesse Stovall’s machine as several others tried to dodge the fracas. The left-front of Simpson’s car suffered major damage, ending his race along with Vaught's.

A lap-30 yellow appeared for a slowing Tyler Erb, who broke a rear axle; another caution came out three laps later for a slowing Mike Marlar.

The 50-lapper came after more than a two-hour rain delay as showers started just before the main event was set to begin. Once the rain stopped and the surfaced was reprepared, feature starters hot-lapped on the track before the race began.

Because of the wet conditions, officials allowed drivers to swap helmets during a lap-29 caution to improve visibility.

Notes: Ferguson earned his third victory of the season; the previous two came on the Ultimate Southeast Series. … Ferguson plans to continue with the Lucas Oil Series July July 23-25’s Silver Dollar Nationals at I-80 Speedway in Greenwood, Neb. … Davenport apologized for his role in helping trigger the backstretch melee on the 29th lap. “I hate I come down and hit that one car. I didn’t see him,” Davenport said. “Everybody was sliding each other and (Mike) Marlar had come across the slick and slid right in front of me. I was either going to have to hit the brake or try to turn under him. I hate that for them guys.” … Billy Moyer Jr. gave up the fifth spot during the lap-29 break to swap helmets to head to the hot pits and change a right-rear tire; he ended up 11th. … Tyler Erb had to take a provisional and repair his car’s nosepiece after tangling with Jason Papich in a consolation race. … Another provisional starter was Payton Looney, who one night earlier earned a career-high $20,000 in the Show-Me 100. He was an early retiree Sunday.