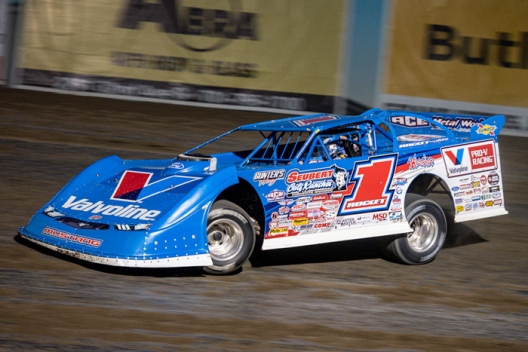 Sheppard’s ability to run anywhere on the track in his Rocket Chassis house car helped him wrest the lead from Weiss.

“Yeah I knew we were pretty good right from the get-go there, we were hanging with him,” Sheppard said. “I could run with him on the bottom, the middle or the top, so I was hoping we could get to lapped traffic so that we could slice-and-dice things up a bit. Lucky it worked out in my favor tonight, you know, Ricky has been tough, and Cade has been tough, congratulations to them guys on the podium.”

A winner at River Cities last season, Sheppard had to adjust to some subtle changes.

“Yeah it was, the track was a little bit more slick than what we normally have for feature time right from the get-go there, it was tricky.” Sheppard said. “I didn’t know, they changed the track a little bit from the past couple of years, so the top wasn’t quite as good as normal for as wet as it was. I think it made it more racy, we were able to race all over this thing tonight. Just kind of chase the brown, it made for a fun night of racing.”

After overtaking Weiss on lap 31, Sheppard dove to the low side while Weiss attempted a run at the high groove to close in on the leader. With Weiss getting caught in lapped-traffic, third-starting Cade Dillard slide ahead of Ricky and turned his attention to Sheppard.

A rare bobble from Sheppard on lap 41 allowed Dillard to close the distance, but was never able to make a serious challenge.

“We went with a different tire than everybody else, I was kind of worried at the beginning of the race,” Dillard said, “so I probably tried to keep it under me too much and with 10 to go I stepped it up.”

Weiss scored his third podium finish of the month.

“Still happy with my guys, they’re really working hard on this thing and we got a lot of speed,” he said. “I think we got something we finally can contend with Brandon.”

Boom Briggs drew the lone caution of the race on lap 13 while Tom Corcoran was the first retiree from the 50-lapper on the fourth lap.

Notes: Multitime WoO sprint car champ Donny Schatz of Fargo, N.D., challenged for a top five finish the majority of the race before 14th-starting Dustin Strand muscled his way to fifth when the checkered flag flew. … The 50-lapper saw 13 cars finish on the lead lap, with four one lap down while seven retired early. … Blake Anderson of Grand Forks, N.D., was involved in a nasty tangle on the sixth lap of his B-main that brought out the red flag.