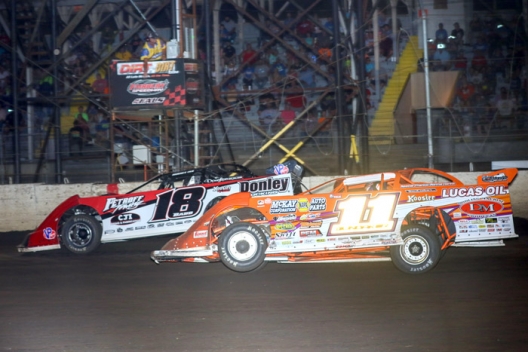 The driver whose back-to-back Summer Nationals victories last season came with last-lap passes added more heroics with the deepest winning rally on the series in seven years and he saluted the crowd by climbing out of his car, then climbing the backstretch fence before heading to his raucous victory lane celebration.

"Man, to win in front of these fans means so much. These people here are the best in the country,” Gundaker said after his 50-lap victory. “They come out, they get rowdy, they love their locals. I feel proud to be one of the guys they like who comes from out of town here. Just to win in front of them, I knew I had to get up on that fence for ’em after I won.”

Gundaker, who has led fewer than 20 laps of his four career Summer Nationals victories, worked the low groove to perfection in breaking into the top five at lap 35, muscling past Rick Eckert on lap 42 for third, then going past Brian Shirley and Babb to win by 1.299 seconds at the checkers.

Shirley cruised in the high groove early, but near the middle stages, Babb closed in as the frontrunners methodically tried to overtake lower-running backmarkers.

After the race’s lone caution on lap 32 — Mike Spatola got into the frontstretch wall and stopped just before the flagstand — Babb went around Shirley on the restart to take command while Gundaker continued heading for the front.

“We were so good. We could just roll around the bottom so much better than those guys,” Gundaker said. “I was kind of stuck behind a couple of guys there for a while, but I knew it was 50 laps, and I was kind of biding my time and getting in a groove there.”

After squeezing under the low-running Eckert entering turn three with eight laps remaining, Shirley and Babb were running higher on the track and Gundaker rolled past with ease. Before he knew it, he was climbing the backstretch fence.

“Hey, you’ve gotta give the people what they want. I could hear the crowd going crazy. These people just love energy and that’s what Fairbury’s all about. You know, you come to the (Prairie Dirt Classic), they’re screaming, they’re here for three or four days going nuts,” Gundaker said. “And I felt like we put on a helluva show for ’em, so I wanted to show my appreciation for the FALS Faithful, and I think we did that winning ($10,000) tonight.

“I know on that white flag lap I kind of took a glimpse at ’em as I was coming down the backstretch and I could see ’em standing up. It just sends chills.”

Eckert, who overcame a poor time-trial effort with a runner-up finish in his heat race, sought advice from Mark Richards of Rocket Chassis in trying to improve at the quarter-mile oval where he’s frequently struggled.

“It was a heckuva race,” said Eckert, who was running fourth with six laps remaining but gained two spots late. “There was four or five of us there in a pile and that’s why the fans love this place.

“(Gundaker) got to where he knocked the tires in pretty far out of (turn) four and we could get up on that bank a little bit the last couple of laps. Once I got my left-sides up there, I felt I was as good as him, but it was just too late.”

Babb thought his groove was going to be good enough to win until Gundaker entered the picture.

“The track was really wet tonight and it had a real sticky middle, and just a few shiny shots. We went softer than usual on the right-rear tire and was able to get to the lead, but it wasn’t good in the shine,” Babb said. “I think, evidently Gordy, he definitely made the best of what he could make out of the bottom. We were real happy to get to the lead and I thought we was going to be able to hold ’em off, but I didn’t see that coming.

“He’s a hard-core racer and he deserves moments like this. You know, you don’t win races by getting them given to you. He won this one for sure.”

Notes: The track hurriedly ran the feature to beat an approaching storm that arrived about 9:20 p.m.; rain and high winds littered the nearby roads with limbs and branches and tore the facing off a gas station canopy at I-55's Chenoa exit. ... Gundaker’s Summer Nationals have all come in Illinois, two at Macon Speedway (2018-19 and another at Farmer City Raceway (’19) to go with his Fairbury triumph. … His victory from 15th made him the first series driver since 2016 to win from beyond the fifth row and the deepest winning rally since Dennis Erb Jr. of Carpenterville, Ill., won June 12, 2013, at Brownstown (Ind.) Speedway. … The series announced Saturday that July 26’s event at Belle-Clair Speedway in Belleville, Ill., has been removed from the schedule because Covid-19 restrictions have kept the track closed in 2020.

Several cautions slowed the second and third heats. … In the first heat, fast qualifier Brian Shirley cruised to victory. … In the second heat, Kevin Weaver had a slow rollover accident in turn four when he got sideways between the corners and collected the onrushing cars of Titus Sneed and Trevor Gundaker. The B12 ended up on its lid and while It took a few minutes to right the car, he wasn’t hurt. … Weaver, Sneed and Trevor Gundaker were all done for the heat. … Gordy Gundaker spun when the heat restarted and made the high side work late to nip Eric Smith for the final transfer spot. … In the third heat, Rick Eckert slid under Daryn Klein to take second exiting turn four just as Klein came around to spin on the frontstretch. … Scott Schmitt was part of two third-heat cautions. … Frank Heckenast Jr. ran unchallenged in the caution-free fourth heat.