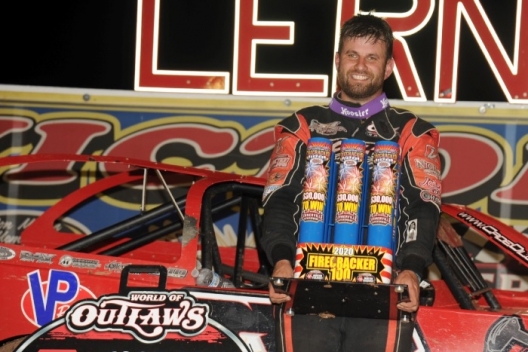 SARVER, Pa. — Cade Dillard entered Saturday's Firecracker 100 finale at Lernerville Speedway with the best combined finishes in Thursday and Friday's prelims at the 4/10-mile oval. He saved the best for last.

Starting on the pole of Saturday's 50-lap main event, the 29-year-old Robeline, La., driver was never headed in roaring to the richest victory of his career with a $30,000 payday on the World of Outlaws Morton Buildings Late Model Series.

"This whole deal is a dream come true," Dillard said in victory lane after climbing out of his car to celebrate, then hug crew chief Donnie Pederson and other crew members. "I never thought in a million years thought something like this would happen."

Dillard, who'd already earned one of WoO's richest 2020 paydays in January with a $15,000 triumph at Vado (N.M.) Speedway Park, took the checkers at Lernerville 1.377 seconds ahead of Max Blair of Centerville, Pa., Thursday's 25-lap preliminary winner over Dillard.

Running the high side most of the race, three second-running drivers — Norris, Lanigan and then Blair — vainly chased the winner, never making a serious bid to overtake the driver who finished second Thursday and fourth in Friday's 25-lapper.

Six cautions — including one with six laps remaining when fifth-running Chase Junghans slowed with a left-rear flat tire — kept Dillard on his goes.

"I didn't want to see those cautions, that's for sure. I felt like I got in a good rhythm before that last one, and I've lost a couple of these for that reason. I don't know. I was somehow able to stay fairly calm," Dillard said. "You definitely gotta keep your cool with so many good guys like that behind you. I don't know. This is a dream come true."

Blair, taking advantage in the final laps to take second from Lanigan, added his $15,000 runner-up finish to Thursday's $6,000 triumph. (Blair also scored a $10,000 repeat finish later in the night in the Bill Emig Memorial on the Pace Performance RUSH Series for Crate Late Models.)

"Man, it's been a fun weekend. I can't believe how competitive — well, except last night in our heat race — but other than that, we've been competitive all weekend," said Blair, who has three career WoO victories. "I don't get to race against these guys very often, let alone be this competitive with them when I do. So it's been a lot of fun.

"Again, I hate how Thursday night ended (when he tagged leader Brandon Sheppard in turn three on the last lap, spinning him around). I'm really, really excited to get a second place tonight. I didn't have nothing for (Dillard) and I didn't have nothing for (Lanigan) until he got up above the cushion here. I was going to run third if that didn't happen, but it's pretty awesome."

Lanigan, the 2014 Firecracker winner and five times a runner-up, settled for third after contending throughout the race while running the cushion.

"It's a fine line up there when you get up there running (the cushion), and you gotta be right against it and it makes speed, and if you get on it too far, you're going to get pulled into it," he said. "It seems like once you get up there, too, you get your left-side tires hot and it's hard to go back to the bottom, then. Like I said, good run for us, we always love coming up here and always seems to run good, so maybe again next year.

Besides the lap-45 slowdown for Junghans, five other cautions appeared, three in the first 20 laps and two more yellows in the second half of the race for flat left-rear tires for Gregg Satterlee (laps 31 and 37).

The first yellow appeared on the ninth lap when Mason Zeigler got out of shape on the frontstretch, then again on lap 15 when Ricky Thornton Jr. stopped over the turn-two banking. A lap-18 yellow appeared when Shannon Babb ended up facing the wrong direction in turn three with a broken rear end, requiring a tow off the track.

Notes: Dillard's previous richest racing payday was a $20,101 payoff last season in the USRA Fall Nationals at Vado (N.M.) Speedway Park, the same spot where he won his first WoO feature. ... Ricky Thornton Jr. of Chandler, Ariz., made his $20,000 victory at Jackson (Minn.) Motorsplex his first career WoO victory, so the three richest series races in 2020 so far have gone to drivers who entered the season winless. ... Provisional starter Scott Bloomquist was the first retiree in Colton Flinner's car, which he was driving after being disqualified in postrace tech after his heat race and engine problems in his consolation race.

As Bloomquist was heading onto the track to run the first B-main, Cody Sommer, Bloomquist’s partner in Scott Bloomquist Racing, made a preliminary comment on the disqualification.

“There’s a bolt on the droop limited that they didn’t like,” said Sommer, who maintained that the bolt “has been there all year” and the team was upset enough about the ruling that they might reconsider their plans to follow the WoO tour for the remainder of the season.

Bloomquist pulled off the track halfway through the first B-main after his car showed smoke. After terminal engine trouble was discovered, he arranged to start the feature in Colton Flinner's car using his points provisional.

With sunny skies assisting the track-drying process after afternoon showers ceased shortly before 6 p.m., officials sent the first group of Crate Late Models onto the track to finish packing the surface at 7:23 p.m. WoO hot laps began less than 20 minutes later, providing hope that the program can be pushed quickly enough to complete the WoO heats and B-mains and have the 50-lap feature ready to go when the 1-hour window for the live broadcast on CBS Sports Network opens at 9 p.m.

Several periods of showers and thunderstorms hit Lernerville Speedway throughout Saturday afternoon, but as of 6 p.m. the precipitation had stopped and clearing — including patches of blue sky and some sun — was overtaking the area.

As the Lernerville track crew headed back out to prepare the racing surface after the rain, officials pushed back the drivers' meeting one hour to 6:45 p.m. They said they hope to have the track ready for hot laps shortly after the meeting is completed.

With the 50-lap Firecracker 100 finale scheduled for live broadcast on CBS Sports Network from 9 p.m. to 10 p.m. ET, officials will have to rework the evening's schedule to complete four heat races and two B-mains in rapid-fire fashion in order to have the A-main ready to go in the live-television window. The entirety of the RUSH-sanctioned Crate Late Model Bill Emig Memorial program — two B-mains, the $10,000-to-win feature and a non-qualifiers' race — will likely follow the WoO action if the qualifying events can be completed in time for the $30,000-to-win headliner to go live at 9 p.m.