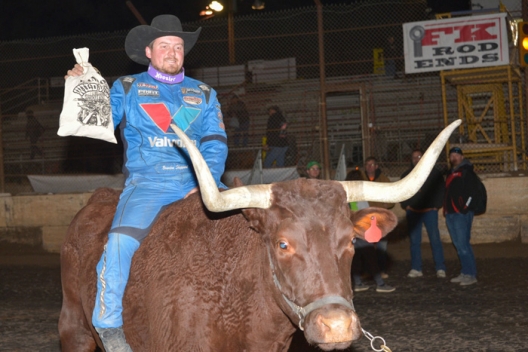 QUEEN CREEK, Ariz. — Brandon Sheppard of New Berlin, Ill., captured the biggest prize of the 14th annual Keyser Manufacturing Wild West Shootout on Sunday at FK Rod Ends Arizona Speedway, winning the $15,000 Shaw Trucking 50 finale along with a $10,000 bonus for his third victory of the miniseries.

“We had a lot of fun and it’s going to make our 25-hour drive home a lot easier,” said Sheppard, who led all the way with the exception of lap 26, when Shirley briefly slipped ahead.

Shirley, who started 17th after a qualifying crash ruined his preliminaries, broke into the top five after just 14 laps and slipped into the lead for a single lap just past halfway in the 50-lapper. But restarting second on lap 33, he got too high and briefly fell to fifth before returning to third and slapping the same turn-three wall he hit in time trials on lap 39, ending his chances.

He lost the third spot to Weiss with two laps remaining in a race that would’ve paid him a $25,000 bonus from the Keyser Quarter-Million Challenge for his fourth victory in nine days. He settled for fourth and the $10,000 bonus he earned from the previous night’s third victory.

“That was a lot of fun,” Sheppard said in victory lane. “I looked underneath me — Shirley got beside me and I was like, ’Where in the world did he come from?’ Congratulations to him. He did a heckuva job this week.

“It’s just been a heckuva a week. For two (drivers) to get a ($10,000) bonus, that’s unheard of. It just so happens that we live 15 miles from each other — or probably 10 miles. It was a fun week. I wish we could’ve done a few things different. I know we had a car to win every night. There was a few mistakes we made there middle of the week and early this weekend that put us behind a few nights, but we’re definitely very thankful for what we have and what we’ve won and what we’ve done this week.”

Sheppard jumped into the lead from outside the front row with polesitter and home-state driver Ricky Thornton Jr. giving chase along with Dillard, Scott and Chase Junghans with Weiss moving into the top five by the seventh lap.

The Weiss-Dillard scramble on a lap-13 restart shuffled the field and Dillard ended up pointing the wrong direction on the frontstretch two laps later for another caution. Shirley took advantage to move into contention, grabbing third from Scott on the 18th lap and then taking second from Thornton on the backstretch three laps later.

Hot on Sheppard’s heels, Shirley dove inside turn the leader in turn one, and when Sheppard slipped up in turn four on the 26th lap, Shirley narrowly led at the flagstand. But Shirley pushed high in turn two on the next lap and Sheppard drove back to the lead, staying in control until the field bunched for a lap-33 caution.

On the restart, Shirley got too high in turn four and lost ground, salvaging the mistake nearly a lap later by diving under Thornton to regain third as Scott held the second spot. Scott stayed within striking distance of Sheppard without finding a way past while Shirley’s hopes fizzled against the turn-three concrete.

Scott, who was in contention for a podium finish the previous night before a flat tire forced him out, earned $5,000 for his runner-up finish.

“The lapped traffic, I didn’t know where they were going sometimes. But it worked out for us. After the week we’ve had, this feels like a win to me, running second to Brandon. He’s one of the best out there so I have nothing to complain about.”

Weiss posted his fifth top-five finish in the six-race miniseries.

“I can’t say enough about this team. We’ve been really digging,” Weiss said. “We’re learning a lot in the trailer, learning a lot of adjustments on the car and what it likes, and I think we can go further yet and be ever better. It’s a good start to the year (and) we’re consistent, and hopefully we can get a few more wins this year and keep it on top.”

Shirley was left to wonder what might've been after getting a legitimate shot for a $40,000 payday.

“When I was behind Sheppy it was like looking in the mirror. His car looked as good as mine ..." Shirley said. “It was just some errors in my own driving — maybe a little adrenaline. I mean, when you’re out there, you’re attacking this track, just attacking, attacking, attacking. Man, I was so good in (turns) three and four compared to those guys, I just charged too hard. I had that bad restart and once I climbed the wall, my car just wasn’t as balanced as it was, so I’m sure something got bent."

The feature was slowed by four cautions, none for serious incidents. Terry Phillips slowed and pitted to change a flat left-rear tire on lap two and Frank Heckenast Jr., who entered the race fourth in WWS points, stopped with right-front damage and a missing air filter on lap 13, and another yellow for Dillard two laps later. The final yellow appeared on lap 33 when John Cornell slowed in turn two.

Notes: Sheppard has four career WWS victories; he earned $13,000 for winning the 2018 finale at Arizona Speedway. … Sixth-place finisher Ricky Thornton Jr., who was second the first 20 laps, ran most of the race without power steering. ... The Late Model feature started about 7:30 p.m. and ended before 8. … Thirteen of 24 starters completed 50 laps. … John Cornell of Phoenix, Ariz., and Casey Skyberg of Rapid City, S.D., made the most of their last chances to make their first WWS features by transferring through heat races for Sunday’s finale; it was timely with every starting earning at least $1,000 (double the start money from earlier in the week). … Brian Birkhofer of Muscatine, Iowa, earned $1,000 from the Premier Waste Services Shock the Clock Challenge with Jan. 12’s 14.790-second lap, the best of the week in the Super Late Model division. Sheppard set fast time three of six events but couldn’t eclipse Birkhofer’s mark.

Heading into the record-setting $15,000-to-win finale, bonuses are the story of the day for a pair of Illinois drivers who have dominated the miniseries at the third-mile oval southeast of Phoenix. Brian Shirley of Chatham, Ill., secured a $10,000 bonus Saturday with his third victory, but he can trade that in for a $25,000 check if he can capture a fourth victory. Two-time winner Brandon Sheppard of New Berlin, Ill., is also alive in the Keyser Quarter-Million Challenge with the opportunity for $10,000 himself if he can capture a third victory.

The rest of the 40 or so competitors will try to put an end to the Shirley-Sheppard strangehold on the event in the Shaw Trucking-sponsored 50-lapper that wraps up a week of desert racing. Late Models will be split into four groups for time trials with officials employing combination hot-lap/time trials to set the lineups for four heat races. Drivers start heats straightup by time.