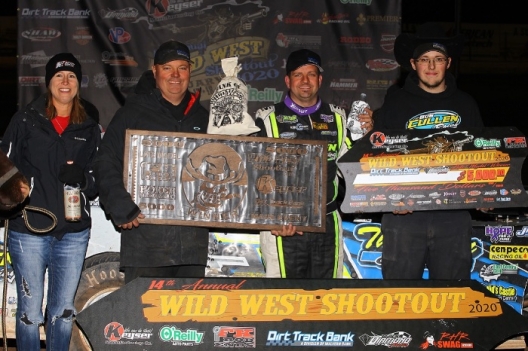 QUEEN CREEK, Ariz. — With his third miniseries victory, Brian Shirley on Saturday grabbed a piece of the Keyser Quarter-Million Challenge — and he’s looking for more.

The Chatham, Ill., driver captured another $5,000 victory at FK Rod Ends Arizona Speedway, guaranteeing him a $10,000 bonus at the Keyser Manufacturing Wild West Shootout with the possibility of a $25,000 bonus if he can capture Sunday’s 50-lap finale.

“It’s overwhelming. I can’t think my wife and kids (enough), my dad. It’s really special,” Shirley said, thanking his sponsors and crew amid a 50-day racing trip away from family and friends. “They’ve put in a lot of hard work and we’re just fortunate that things are going our way.”

Shirley overtook outside front-row starter Johnny Scott on the 10th lap and led the rest of the 40-lap feature in the second-to-last miniseries event, taking the checkers 1.091 seconds ahead of runner-up Ricky Weiss of Headingley, Manitoba. Brandon Sheppard of New Berlin, Ill. — a two-time miniseries winner and only other driver to win besides Shirley — was fourth with Bobby Pierce of Oakwood, Ill., rounding out the top five.

Two contenders fell by the wayside late with flat tires. Scott, of Las Cruces, N.M., was running fifth when his left-rear tire went flat on lap 35 and polesitter Chase Junghans of Manhattan, Kan., had a flat right rear on lap 38 while running third.

Once Shirley overtook Scott, he ran mostly unchallenged until Weiss took a few peeks underneath him on the late restarts.

“Man, I just, I didn’t want to see that caution with two (laps) to go,” Shirley said. “I could see my crew guys telling me I was pretty good, so I was riding around, but there was a bump there in (turns) three and four and I hit it, I think right on that restart, so it messed me up.”

“Shoot, it’d be great. Everything we (win) goes back into the team. (Team owners) Bob and Lisa (Cullen), they spend a lot of their hard-earned money — all of our sponsors, do — they spend their hard-earned money to keep this race team going up and down the road,” Shirley said. “Bob puts every penny of it back into the team and it would just be a real testament to help us (stay) out there. We’re obviously going to start off on the (Lucas Oil Late Model Dirt Series), and any time you can put some money in the bank to get the team rolling, it’s real nice.”

Weiss, who started fifth and took the second spot from Scott on the lap-27 restart, posted his fourth top-five finish on the miniseries but couldn’t keep up with Shirley in the final laps.

“We could restart real good and almost get next to him,” Weiss said. “You got to try something, go somewhere where he’s not, and I would dive down. He’s always raced me clean so I wasn’t going to go stuff him in the wall or nothing, but I was definitely going to be there if he slipped up any. We had a real good car. We’ve been tweaking on it all week and we found a little speed tonight. Hopefully we can (carry) that on to tomorrow.”

Sheppard, who won back-to-back miniseries events earlier in the week, said his heat-race struggles that left him starting outside the sixth row in the main event cost him a chance to grab a third feature victory.

“Definitely we just needed to start a little farther up front,” said Sheppard, who hasn’t finished worse than fourth in five feature starts. “Our car is really awesome night in and night out. So congratulations to Brian. He did a really good job.”

The 40-lapper was slowed by three cautions, first for Justin Duty’s lap-27 slowdown and again for flat-tire cautions for Scott (lap 35) and Junghans (lap 38). While Junghans started on the pole, he quickly slipped back to fifth when he brushed the wall in turns three and four on the first lap.

Notes: Officials announced next year’s miniseries dates for Jan. 9-10, 13, 15-17 at FK Rod Ends Arizona Speedway; practice will be scheduled for Jan. 8. … Don Shaw of Ham Lake, Minn., won the Pro Power Dash for non-qualifiers and elected to take the $1,000 purse instead of tagging the tail of the main event. … Ryan Gustin of Marshalltown, Iowa, blew a tire on the second lap of his heat race, sustaining significant body damage that forced him to scratch for the rest of the night. … Nick Deal of Walnut, Iowa, broke a transmission in Friday’s feature that caused other damage, ending his miniseries that started with a fiery turn-two accident his team never recovered from; he didn't enter Saturday's action. … Steve Stultz, driving a former Brian Birkhofer car, spun out of a transfer spot in the first consolation.

Miniseries competitors on Saturday will try to stop the 1-2 Illinois punch of Brandon Sheppard and Brian Shirley in the fifth round of the Keyser Manufacturing Wild West Shootout.

In Saturday’s $5,000-to-win program, Shirley and Sheppard have a chance at a $10,000 offered for three-race miniseries winners in the Keyser Quarter-Million Challenge. Both drivers also have a shot at the bonus program’s $25,000 to any four-race winner.

The top four finishers in each of four heats transfer to the 30-lap main event with the winners redrawing for the first two rows of the feature lineup. Consolation races will transfer four drivers apiece to the 24-car main event. The 10-lap Pro Power Dash for nonqualifiers pays $1,000 or a tag-tailing spot in the main event.