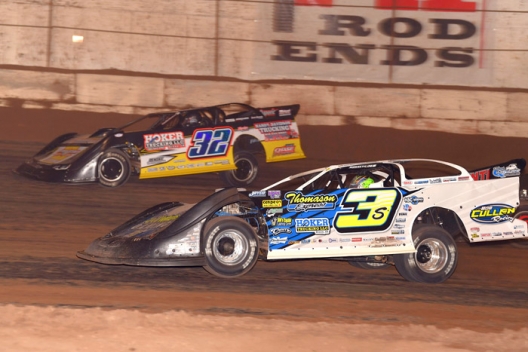 QUEEN CREEK, Ariz. — A pair of Illinois drivers came to Arizona in search of desert treasure, and they’re not leaving much cash for anyone else.

Shirley, who started alongside Sheppard on the fourth row, took the lead from polesitter Chris Simpson of Oxford, Iowa, on the 21st lap and led the rest of the way at the third-mile oval southeast of Phoenix.

With two miniseries races remaining, Shirley and Sheppard both have a crack at $25,000 from the Keyser Quarter-Million Challenge, which pays $25,000 to any driver who can grab four victories. Drivers who can grab three of six victories can earn $10,000 in the title sponsor’s bonus program.

"We could both walk away with 10-grand,” a smiling Shirley said in victory lane. “I’d be perfectly happy sharing it with a friend like that.”

Simpson took the lead at the outset over Mike Spatola and Ricky Weiss with Shirley quickly getting into the mix, grabbing third on the seventh lap while Sheppard was still back in the seventh spot. After a caution, Spatola slipped out of contention as Simpson continued to lead Weiss, Shirley and then Sheppard, who reached the fourth spot on lap 12.

Shirley dove under Weiss in turn three on the 14th lap to grab second and they swapped the runner-up spot the next two laps as the high-running Simpson held on up front. As the frontrunners faced traffic, Simpson, Shirley and Weiss were nearly three wide for a few laps before Shirley worked under Simpson to take control on lap 21 with Sheppard dropping Simpson to third a lap later.

Two late cautions reset the field with Sheppard hot on Shirley’s heels, but Shirley fought off a few challenges and won by 1.162 seconds for his second victory in seven days.

Shirley knew he had to hang on “when you’ve got the No. 1 guy in the country behind you,” adding that “he’s my friend and obviously we race as hard as we can against each other when we’re on the track. I love them guys to death.”

Sheppard, who saw his two-race winning streak come to an end, fought his way into position to challenge but couldn’t find a way past Shirley.

“We had a really good race car there. He could momentum better than I could, being out in front of me up high,” Sheppard said. “I could stick with him up high, but I couldn’t really make any ground on him, so I was trying the bottom and trying the bottom and hoping he was going to make a mistake or something.

“But, like I said, we had a really good race car. We needed to start up front, but I think he started seventh and and we started eighth. I guess I needed to pass him early in the race and hold him off there. It was a heckuva a race and it’s cool to see my ol’ buddy Squirrel win. Good job to him.”

Simpson led 20 laps and posted his best finish of the week.

“(Sponsor) Hoker (Trucking) really wants us (in victory lane), so I gave it all I had,” the Iowan said. “I didn’t set up for the bottom — not that I didn’t set up (to run the bottom), I just didn’t know how the track was — and I left the car a little free, and it just killed me on (corner) exit. It is what it is. I tried to get up on the wheel.

“I told the (crew) I wouldn’t let ’em down, so I got up there and rode as long as I could. But when I slid (past) Earl (Pearson Jr.) down here, it really ruined my momentum and they got a run on me, and it was kind of over from there. But, we’ll take it. We were 15th the other night, so to come back third, the car’s close and we’ll work from there.”

The 30-lapper was slowed by three cautions with the lone multicar incident on the 25th lap when Brian Birkhofer spun in turn two while battling with Bobby Pierce. The first yellow appeared on the eighth lap when sixth-running Cade Dillard made contact with Ricky Thornton Jr. in turn four and spun out of contention. The second caution appeared on lap 22 when first-time WWS starter McLain Beaudoin nosed into a turn-two tire barrier.

Action resumes Saturday with another $5,000-to-win event with the $15,000-to-win miniseries finale set for Sunday. Hot laps begin at 3 p.m. each day with modifieds and X-mods on the undercard.

Notes: Shirley, whose wife Shannon suffered a seizure a week earlier, said she’s improving and has help at home, but it’s still difficult being away. “(Crew chief) Anthony (Burroughs) has a brother-in-law that’s hurting right now, so we’re both just toughing it out and can’t wait until Feb. 16 to get home,” Shirley said. … Eighteen of 24 starters finished on the lead lap. … Nick Deal was towed off the track during the lap-eight caution. … Wednesday’s runner-up Jimmy Mars of Menomonie, Wis., had engine issues when firing up the powerplant and sat out Friday’s action; the team made an engine swap to get ready for Saturday’s racing. … Kenny Densman got into the frontstretch wall in time trials and also scratched for the night. … Cody Laney of Torrance, Calif., retired early in his heat race after running second early; he scratched for the remainder of Friday’s action. … Home-state driver John Cornell got into the backstretch wall during the first consolation race, ending his night.

Brandon Sheppard of New Berlin, Ill., will be gunning for his third straight miniseries victory Friday with a potential five-figure payday in sight via the Keyser Quarter-Million Challenge. Sheppard, who won Sunday and Friday at the third-mile oval southeast of Phoenix, could earn $100,000 if he can win the remaining miniseries events.

The bonus program also pays $25,000 for four victories (opening race winner Brian Shirley of Chatham, Ill., still has a shot at that) or $10,000 for three victories in the Late Model division.

Friday’s event kicks off a tripleheader weekend that continues with another $5,000-to-win program on Saturday and the $15,000 finale on Sunday with hot laps at 3 p.m. MST each day.