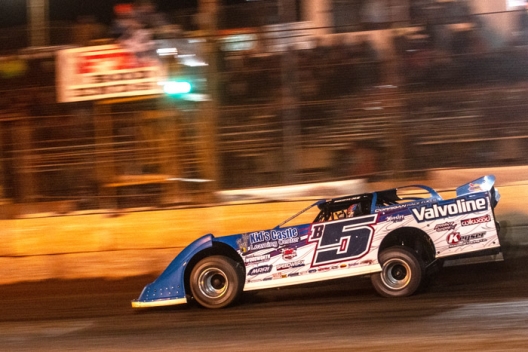 QUEEN CREEK, Ariz. — With his toughest competitor failing to hunt him down, Brandon Sheppard continued his hunt for a five-figure bonus Wednesday at FK Rod Ends Arizona Speedway.

The New Berlin, Ill., driver clicked off his second straight victory on the Keyser Manufacturing Wild West Shootout with a flag-to-flag triumph paying $5,000 after challenger Cade Dillard climbed the wall on a late restart and retired.

The victory keeps alive Sheppard's hopes for a five-figure prize from the Keyser Quarter-Million Challenge, which pays $100,000 for any driver who can win five races. (Brian Shirley’s opening-race victory eliminated Sheppard’s shot $250,000 for the six-race sweep; the bonus program also pays $25,000 for four victories and $10,000 for any Super Late Model driver who grabs three victories.)

“It’s been phenomenal,” Sheppard said of his Rocket Chassis that also carried him to victory Sunday at the third-mile oval southeast of Phoenix. “I had a really good car the first night, and Sunday night it was great again, and it carried over to tonight, too. We were able to qualify good and win a heat race, and that’s what it takes to (start up front and) make life a lot easier.”

With Dillard the only driver who could keep up, Sheppard took the checkers 3.228 seconds ahead of polesitter Jimmy Mars of Menomonie, Wis., while Ricky Weiss of Headingley, Manitoba, was third in a 30-lap feature run on a high-speed track reworked just prior to the green flag. The ninth-starting Shirley of Chatham, Ill., was fourth and 23rd-starting Chase Junghans of Manhattan, Kan., rallied to round out the top five.

Sheppard took command early from outside the front row while the fourth-starting Dillard of Robeline, La., tracked him down by the 10th lap. But Dillard got sideways in turn two, nearly coming to a complete stop, and fell from four-tenths of a second behind to more than two seconds behind.

A lap-13 caution for Garrett Alberson helped Dillard reset and resume his pursuit while Mars, Weiss and Shirley battled in the top five through the race’s middle stages. Another yellow flag on lap 21 for Jason Papich bunched the field again, but Dillard slid too high on a restart and slid into the turn-two wall with his right-side wheels briefly climbing the concrete. He was forced to retire.

Sheppard’s remaining pursuers sliced and diced over the last nine laps, but they couldn’t keep up with the winner.

“My crew guy was telling me how close (Dillard) was and whatnot, and he showed me it was getting closer there a little bit, so I picked up the pace some,” Sheppard said. “This thing was just really good. I could put it wherever I wanted to. It’s really hard to tell exactly where you need to be when you’re out there leading.”

Mars, the 47-year-old who started on the pole and held a top-three spot all the way, was glad to battle against fellow heat-winning drivers with an average age nearly 20 years younger.

“Brandon, he’s just a helluva driver, Ricky’s a good driver, Cade, all them guys. Just to be hanging with ’em, that’s pretty fun,” Mars said. “Our cars were kind of giving us some fits here. (I’ve been) scratching my head the last week, but we finally got it going pretty good.”

Weiss was trying to work under Mars before the final caution but could never complete the pass.

“I just could never clear him after that caution. I was trying and trying and he just was able to be better on the bottom there,” Weiss said. “Little did we know we sat in staging for way too long, and I didn’t think they’d (rework) the track that much. I mean, hat’s off to them for doing as much as they did in that short amount of time, but hopefully we can build a racetrack tomorrow and slow it down a little bit.”

Notes: The track surface was aggressively reworked for about 20 minutes before the main event while drivers sat in the starting grid. … A turn-two scramble in the third heat forced Earl Pearson Jr. to retire when the rear of Dennis Souza’s car entered his cockpit, bending his seat and folding up his car’s decking to prevent him from easily climbing from the car. Pearson had his bell rung but was OK later in the pits, except for a sore left shoulder. … Terry Phillips also saw his night end in the fourth heat when he lost a driveshaft and hit the turn-two fence.

Frank Heckenast Jr. of Frankfort, Ill., the runner-up in the miniseries opener, will have to dig from the back Wednesday after breaking a driveshaft in time trials. … Wednesday’s fast qualifier Brandon Sheppard has two fast time awards on the week. … Brian Birkhofer isn’t in action tonight, but one of his former cars is on track. Arizona driver Steve Stultz purchased one of Birkhofer’s older Black Diamond Chassis from Jason Rauen, practiced it Tuesday and debuted it Wednesday. … Rick Eckert slipped into an Allen Murray-owned ride to compete in Wednesday’s action; Murray drove his own car over the weekend. … Another newcomer was Brian Schultz of Casa Grande, Ariz., a regular in Southwest Dirt Racing Association action.

Brian Shirley of Chatham, Ill., and Brandon Sheppard of New Berlin, Ill., won the weekend’s miniseries-opening events and are chasing a $100,000 bonus if they can grab five victories, part of the Keyser Manufacturing Quarter-Million Challenge in the six-race miniseries. The bonus program also pays $25,000 for four victories or $10,000 for three victories in the Late Model division.

Wednesday's event is the third of six races through Jan. 19 at the third-mile oval southeast of Phoenix. Competitors take Thursday off and return Friday for another $5,000-to-win event.