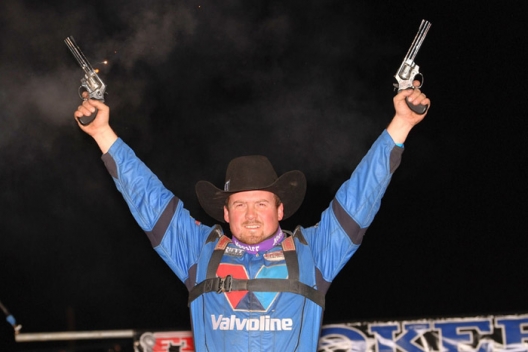 Starting outside the front row in the 40-lap feature, the reigning WWS champion slipped under polesitter Don Shaw of Ham Lake, Minn., on the eighth circuit to take command, then fended off late-race challenges from Bobby Pierce of Oakwood, Ill., and runner-up Ricky Weiss of Headingley, Manitoba, for his second career miniseries victory.

“We were really good there on the bottom and we were able to get the lead there and stretch it out a little bit, but I knew at some point the top would come back in,” said Sheppard, the Rocket Chassis house car driver and two-time World of Outlaws Morton Buildings Late Model Series champion who is piloting his family-owned No. B5 in the desert. “The bottom was definitely starting to slow up for me after that last restart, and luckily my crew guy Joe, he told me to get up to the top. Right as soon as I went up there I knew (the track surface) was starting to clean up.”

Sheppard's victory eliminated the possibility of the richest payout from Keyser Manufacturing's Quarter-Million Challenge, which offers $250,000 for a six-race miniseries sweep. Sheppard and Saturday’s winner Brian Shirley — who finished seventh Sunday — still have a shot at the $100,000 for five victories, while the bonus program pays $25,000 for four victories or $10,000 for three victories in the Late Model division.

Feeling the pressure from Pierce and Weiss, Sheppard made sure he was “getting up on the wheel there,” he said in his winner’s interview after firing off blanks from the event's customary six shooters. “I didn’t want to sacrifice and get another second. Definitely (runner-up finishes) were getting old and it feels really good to be in victory lane for sure.”

Shaw jumped into the early lead but Sheppard came off turn four on the eighth lap to overtake his fellow front-row starter and pull away to a 2.2-second edge by the 15th lap as Chase Junghans, who made a fifth-to-second move on the 12th lap amid the flurry of Sheppard’s pursuers, gave chase.

After a lap-18 yellow, the sixth-starting Weiss jumped to the high side to overtake Junghans with Pierce coming alive on the top as well and sweeping into the second spot on lap 23. Sheppard jumped to the outside a lap later and the trio of Sheppard, Pierce and Weiss ran nose-to-tail as the track developed a rubber strip in the upper groove.

Sheppard dipped to the bottom on laps 33 and 36 to dive under a few lapped cars, giving him enough cushion to beat Weiss to the checkers by 0.442 seconds.

“I think we had the car, definitely the car to beat him,” said Weiss, adding that he struggled trying to decide which groove was best midway through the 40-lapper. “I made a couple of passes, and (Pierce) got around me in the top of three and four and I just figured it was time to move up.

“I knew I was quicker than (Pierce). I got beside him but he was just kinda crowding me off the rubber a little bit there, and once I was able to clear him I was kinda on hunt to go get Brandon. I didn’t know if the rubber was wide enough to get by him, but we were going to try to make it interesting for sure.”

Pierce felt like he was the fastest car until the race’s late stages.

“It was a heckuva race there. I thought I might have something for Brandon and I knew it was a matter of time before he moved up to the top where I was running,” said Pierce, a three-time WWS winner last season. “Then I had to change my line in turn three — I think I got a little bit quicker — and then just a little bit after that the rubber came. So Ricky and Brandon, they kinda took off after that happened. For a while I was kind of staying with ’em.

“My tires were both killed after the race. I was driving it in hard trying to try and make up the ground from being behind early in the race. I think Brandon could kind of pace himself and be easier on his tires than I was, and Ricky, his car’s been really good, so he’s able to roll right through the middle and go. He was probably easier on his tires too.”

Junghans finished fourth and fast qualifier Brian Birkhofer of Muscatine, Iowa, rounded out the top five in a feature slowed by two cautions, neither for serious incidents. A lap-11 yellow appeared when Johnny Scott’s left-rear wheel fell off and the caution flag flew again on lap 18 when Cade Dillard’s nosepiece folded under.

After two days off, the Arizona miniseries continues Wednesday with another $5,000-to-win Super Late Model program with modifieds and X-mods on the undercard. Hot laps are scheduled for 5 p.m. MST with racing scheduled for 6:25 p.m.

Notes: Sheppard’s previous WWS victory came in the 2018 finale; he captured 2019’s points title at Arizona Speedway despite being winless. … Early leader Don Shaw dropped out of the top five on lap 16 and retired on lap 22. … Jason Papich won the Pro Power Dash but passed on the $1,000 prize to tag the tail of the feature, just like his teammate Tony Toste did the previous night. … Cade Dillard of Robeline, La., who broke a right-rear hub before Saturday’s opening feature, was leading a Sunday heat race when a broken belt forced him out. Dillard transferred to the feature through the first consolation despite a mid-race spin. … After the track is dark Monday, practice and a postpractice pit party is scheduled for Tuesday.

Brian Birkhofer’s quick time Sunday puts him in the driver’s seat for the $1,000 bonus from Premier Waste Services for the event’s overall fast qualifier. … Richard Wallace of Gold Coast, Ore., got into the backstretch wall in time trials and didn’t get a qualifying time. … The No. 55D of Nick Deal of Walnut, Iowa, sustained serious damaged in Saturday’s heat race action. The team worked on the car Saturday night and all day Sunday with plans to have the car ready for Wednesday’s action. … Cody Laney of Torrance, Calif., took Sunday off after his Pete VanIderstine-owned No. 32B had engine problems; they plan to have a new powerplant for Wednesday’s action. … Don Shaw of Ham Lake, Minn., returned to action Sunday after engine woes in Friday’s practice; he bought a powerplant from the Ricky Weiss team. … Kyle Beard of Trumann, Ark., swapped motors for Sunday’s action after dropping a valve Saturday night. —  Ben Shelton

The bonus program pays $250,000 for a six-race miniseries sweep, $100,000 for five victories, $25,000 for four victories or $10,000 for three victories in the Late Model division. More than 40 other drivers are expected to try and stop Shirley in the second round of the miniseries.

The field of Late Models will be split into four groups for time trials with officials employing combination hot-lap/time trials to set the lineups for four heat races. Drivers start heats straightup by time.

The Pro Power Dash for Late Model non-qualifiers (with winner receives $1,000 or a spot in the 40-lap feature) is also on a card that includes complete modified and X-mod programs.

Sunday's event is the second of six races through Jan. 19 at the third-mile oval southeast of Phoenix. Competitors take Monday off, have an optional Tuesday practice and return to action Wednesday for another $5,000-to-win event.