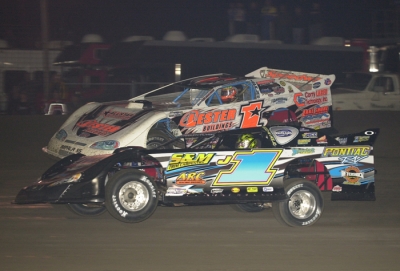 Chub Frank works the outside in winning his heat. (Shawn Crose)

Batesville, Ark.’s Moyer, who enters the weekend riding a two-race WoO win streak and leading the tour points standings, shattered the two-year-old dirt Late Model track record during Friday’s 55-car time-trial session. His qualifying lap of 11.973 seconds — the first sub-12-second circuit in the history of the quarter-mile oval — lowered the standard of 12.348 seconds that Ryan Dauber of Tonica, Ill., had established on April 14, 2006.

Moyer also rolled to victory in the first of six 10-lap heat races driving his battle-tested Victory Circle M1 Chassis. He had spent the previous night practicing exclusively with his other Victory Circle car, which had just one race on its ledger, but decided to run the machine that has carried him to seven of his eight wins this season.

“The newer car felt good last night,” said Moyer, “but I just couldn’t keep this one in the trailer. I just feel too good in this car. I think I probably ran the wrong tires in the heat, but we hung on. I think we’ll have a good shot at (the feature)."

Shinnston, W.Va.’s Richards, who won the WoO season opener and sits second in the tour points standings, was second-fastest in time trials and won the second heat. He then pulled off the move of the night in the dash for the night’s heat winners and two fastest qualifiers, squeezing between Moyer and the outside wall off turn four to seize the lead and march to victory.

“When I got up there (Moyer) started to squeeze me, but I was like, ‘I’m already committed now,’ ” described Richards. “I stayed up there and had barely enough room to get by him.”

Richards, who prefers big tracks but calls Farmer City his favorite bullring because “it’s all about momentum,” drove a Mark Richards Racing Enterprises Rocket car with a swingarm rear suspension. His pass of Moyer gave him a big-time confidence boost heading into Saturday's $20,000-to-win Illini 100.

“He’s definitely been on top of his game all year,” Richards said of Moyer. “I feel like if we can run with him, we can run with anybody. I feel pretty good about our chances. I think as long as we make the right adjustments, we should be able to get a good finish and maybe even win."

The six heat-race winners will redraw Saturday for the top-six starting positions in the 100-lapper, which is billed as the richest dirt Late Model race ever run in Illinois.

Shannon Babb of Moweaqua, Ill., who cut his teeth racing at Farmer City and won last year’s WoO event at the fairgrounds track, failed to qualify in the third heat. He was outgunned for the lead at the start by Shirley and ended up at the rear of the field a few circuits later after sliding off the backstretch, but he rallied to make a bid for the final transfer spot before a flat left-rear tire caused his No. 18 to slow on the last lap.

No driver had a more trying night than Richie Hedrick of Urbana, Ill. He flipped his car during hot laps, then brought out a backup car and crashed it during the sixth heat in an incident that left him with a hand injury. He was taken to a Champaign hospital for treatment.