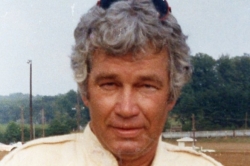 The hulking Bloomington, Ind., native — his helmeted head frequently was visible atop his vehicle — was a Navy veteran and operated Bastin Excavating while winning more than 200 features during his racing career, which began in jalopy-style race cars at Bloomington Speedway before he ran supermodifieds and then Late Models by 1970.

Ira — commonly pronounced “Arie” by family and friends — is survived by his wife Rose Abram Bastin and two sons among other family members. He had 11 great-grandchildren.