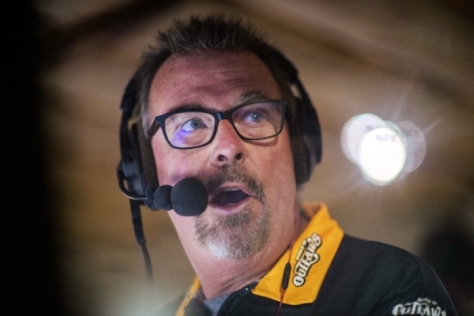 A 61-year-old native of Michigan whose motorsports announcing career has stretched for 43 seasons, Eshelman was last heard from on Thursday morning when he left a hotel in Paducah, Ky. He was on his way to attend this weekend’s DIRTcar Fall Nationals at Lincoln (Ill.) Speedway after the cancellation of WoO events at Cherokee Speedway in Gaffney, S.C., and Senoia (Ga.) Raceway, but Eshelman never arrived, prompting family and friends to ask the racing community for help locating him.

“It is with deep sadness that I have to let you all know that I appreciate every last one of you with all my heart, but my father Ricky Arthur Eshelman has taken his life and is hopefully no longer in any pain,” Derrick Eshelman, Rick’s only child, wrote on Facebook. “The last thing I ever got to say to you is, ‘I love you, dad,’ and for that I am forever grateful.”

Derrick asserted his father’s deep appreciation for everyone in the sport, noting “he loved how much he made you all laugh and smile.” He was especially well known across the Dirt Late Model landscape, specifically as the voice of the WoO tour during two separate, lengthy stints since the series was reborn in 2004 but also for his presence in racetrack pit areas working alongside the circuit’s officials.

Eshelman grew up attending Flat Rock (Mich.) Speedway, where, after working as a scorer, he announced his first race in 1979. A year later he announced at Toledo (Ohio) Speedway before joining the Air Force. He went on to announce at more than 200 tracks and earned recognition for his talents, including the 2012 Tom Carnegie Announcer of the Year Award from the Michigan Auto Racing Fan Club and his recent August induction into the National Dirt Late Model Hall of Fame.

“It is with great sadness and shock to know we lost our brother Rick Eshelman,” World of Outlaws CEO Brian Carter said in a press release. “Please send prayers to his family, his World of Outlaws and DIRTcar family and his many friends across the country.”